What Does Current Money Velocity Say About A Future Rise In Interest Rates?

Lorimer Wilson August 10, 2014 Comments Off on What Does Current Money Velocity Say About A Future Rise In Interest Rates? 2,157 Views

With all of the things in the world to worry about, how much should we worry about a

sudden sharp increase in UST yields? The short answer is not much and here is why.

The above introductory comments come from an article by Armchair Quarterback as posted on SeekingAlpha.com under the title Fears Of A Sudden Sharp Rise In Interest Rates Are Overblown.

Edited excerpts from the article are as follows: 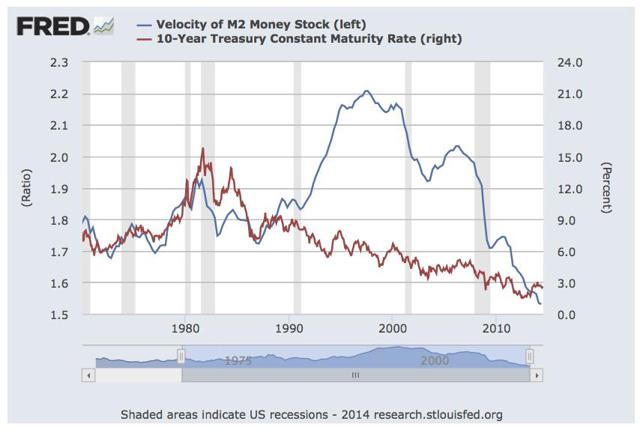 The red line above shows the multi-decade bull market in US treasury bonds with yields on the constant maturity ten year note falling from a high in the mid teens in early 1980s to well below 3% currently.

M2 velocity fell drastically during every recession since 1980. Consumers and businesses pulled back and economic activity slowed down. In the current expansion, we do not see M2 velocity rising which is quite different than previous cycles.

2 – So, if velocity of money is not increasing now, what is driving the economy forward? 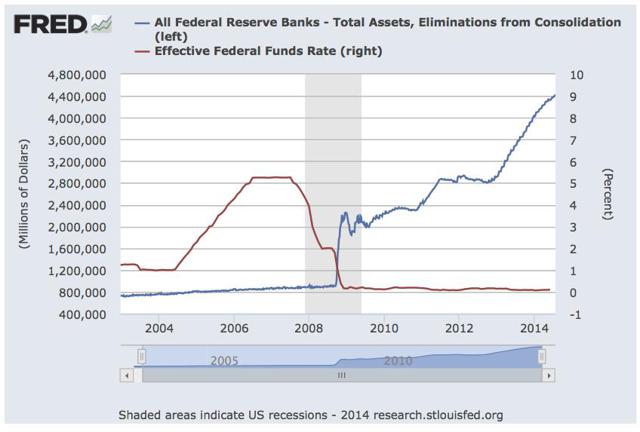 This should be a relatively obvious graph but it’s nice to see the picture. The blue line is the Fed’s balance sheet and shows the sharp rise during the crisis to stabilize the situation and the gradual increase since then due to the numerous QE and asset purchase programs. The red line is the Fed funds rate plummeting during the crisis and remaining near zero ever since.

Traditional monetary policy has been “tapped out” and the Fed has employed balance sheet expansion to generate economic growth and maintain some momentum.

The two graphs above look the same but are slightly different. One plots the number of unemployed people in blue versus the capacity utilization in red. The other plots the unemployment rate in blue versus the industrial production index in red. Both graphs show that the slack in the labor force is reducing while production and capacity utilization are improving and reaching pre-crisis levels.

4 – Even with an improving economy, M2 Velocity shows no signs of increasing. This shows that traditional relationships between monetary measures and economic growth are still broken. 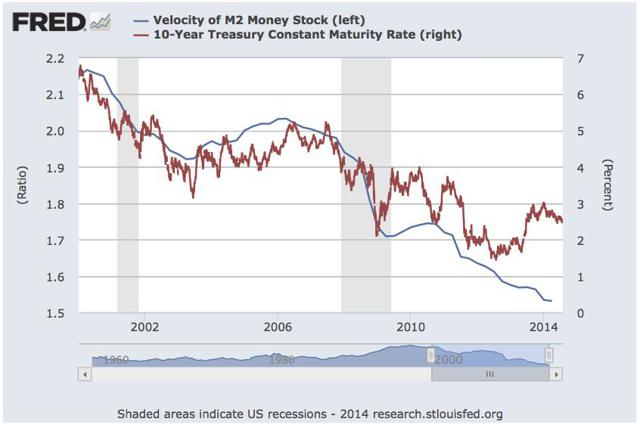 Above, we’ve shown another graph of M2 Velocity plotted against 10 year CMT for a shorter time horizon. The 10 year CMT yields have been choppy but the clear trend downward is still noticeable. The obvious question is when and how does this trend reverse.

Our premise is that as long as M2 velocity remains subdued, especially now that we are more than four years into an economic expansion, we doubt that there will be pressure on rates to rise.

In figure 2 above, we saw that the economy is not reacting to traditional interest rate levers. Factors preventing short term rates to influence economic conditions, and M2 velocity to increase with economic expansion, include:

With all there is to worry about in the world,

We’re doomed! Even if the economy were growing at a faster pace, it wouldn’t come close to offsetting the interest payments on our ever-expanding debt. As such, any sort of credit shock – either rising rates or a decline in the rate of debt expansion – will cause the system to implode. Let me explain why that is the case. END_OF_DOCUMENT_TOKEN_TO_BE_REPLACED

3. Interest Rates to Remain Low As Far As the Eye Can See? Perhaps, BUT

Everyone knows that interest rates are going to rise in the future so the real question is not whether they will rise, but when and by how much. [This article analyzes when that will most likely be.] END_OF_DOCUMENT_TOKEN_TO_BE_REPLACED

4. Higher Interest Rates Will Come Once These 4 Economic Conditions Are Met

4 economic conditions need to be in place for interest rates to rise ahead of – and independent of – the Fed’s forward guidance. The economy met only one of those conditions to date but will likely meet all four by the end of the year…What follows is a status report on the four conditions. END_OF_DOCUMENT_TOKEN_TO_BE_REPLACED

5. Interest Rates NOT Rising Any Time Soon – Even With Fed Tapering. Here’s Why

Everyone and their mom is expecting long-term interest rates to rise now that the Fed is tapering its bond buying programs. I have a couple of problems with this line of thinking because, although it seems like reducing demand for a security (i.e. tapering QE) would result in a drop in price, when you really think about how quantitative easing works this makes no sense and, secondly, the market is telling us this makes no sense. Let me explain. END_OF_DOCUMENT_TOKEN_TO_BE_REPLACED

6. What Affect, If Any, Will Rising Interest Rates Have On the Stock Market

The belief is that rising interest rates (as is currently occurring) are a sign that the economy is improving as activity is pushing borrowing rates higher. In turn, as investors, this bodes well for corporate profitability which supports the current valuations of stocks in the market. While this seems completely logical the question is whether, or not, this is really the case? END_OF_DOCUMENT_TOKEN_TO_BE_REPLACED

There is one vitally important number that everyone needs to be watching right now, and it doesn’t have anything to do with unemployment, inflation or housing. If this number gets too high, it will collapse the entire U.S. financial system. The number that I am talking about is the yield on 10 year U.S. Treasuries. Here’s why. Words: 1161; Charts: 2 END_OF_DOCUMENT_TOKEN_TO_BE_REPLACED

8. Don’t Worry About the Threat of Higher Interest Rates Hurting Stocks – Here’s Why

History clearly shows that stocks don’t fall during periods of rising interest rates. Sure, they might fall a little when a rate hike is announced – maybe for a week or so – but they usually bounce back quickly – and then they go higher. END_OF_DOCUMENT_TOKEN_TO_BE_REPLACED

It seems that the past few years of falling interest rates have lulled a big part of the global economy into financing with variable-rate debt…[As such,] when interest rates go up (as they did last week), there’s a world-wide reset in interest costs that, best case, amounts to a tax increase on individuals and businesses and, worst-case, threatens to blow up the whole system. END_OF_DOCUMENT_TOKEN_TO_BE_REPLACED

The global financial system is potentially heading for massive amounts of trouble if interest rates continue to soar. So what does all this mean exactly? [Let me explain.] END_OF_DOCUMENT_TOKEN_TO_BE_REPLACED

11. Rising Interest Rates Could Plunge Financial System Into a Crisis Worse Than 2008 – Here’s Why

If yields on U.S. Treasury bonds keep rising, things are going to get very messy. What we are ultimately looking at is a sell-off very similar to 2008, only this time we will have to deal with rising interest rates at the same time. The conditions for a “perfect storm” are rapidly developing, and if something is not done we could eventually have a credit crunch unlike anything that we have ever seen before in modern times. Let me explain. END_OF_DOCUMENT_TOKEN_TO_BE_REPLACED

12. We Think Interest Rates are Making a Long-term Turn Upwards

We had previously speculated that the 30-year bond rate would continue downward to around 2% based upon a number of very long-term charts. Short-term charts, however, are showing strong technical evidence that interest rates may be turning up in the long term. Words: 267; Charts: 2 END_OF_DOCUMENT_TOKEN_TO_BE_REPLACED

13. What Causes Interest Rates to Rise? Is That Good or Bad?

Don’t get too worked up over interest on the national debt or what will happen when interest rates rise because, by then, we’ll likely be talking about ways to cool down the economy. [Why?] Because interest rates on US government debt are really a function of economic growth. If the economy is weak the Fed will pin short rates to stimulate the economy and if rates rise it’s going to be a function of better days ahead. Words: 525 END_OF_DOCUMENT_TOKEN_TO_BE_REPLACED

14. A Rise in Interest Rates Would Derail An Economic Recovery – Yes or No?

[While]… I am not currently predicting an acceleration in inflation [I believe]…that the risk of interest rate instability is very real [given that] core inflation is already above a key benchmark that the Fed has staked its credibility on,. It should be of concern to investors that, despite economic growth being so anemic and overall resource utilization being so low (including human resources), there is currently very little margin for error on the inflation front. [In this article the author evaluates the danger that rising interest rates could potentially have on the U.S. economy.] Words: 2050 END_OF_DOCUMENT_TOKEN_TO_BE_REPLACED

Share
Previous Your Car: Can You Drive Further On An Hours Wages Than In the Past? Check It Out
Next Financial Asset Values Hang In Mid-air Like Wile E. Coyote – Here’s Why (+2K Views)