Interest Rates NOT Rising Any Time Soon – Even With Fed Tapering. Here’s Why

Lorimer Wilson April 1, 2014 Comments Off on Interest Rates NOT Rising Any Time Soon – Even With Fed Tapering. Here’s Why 2,711 Views

buying programs. I have a couple of problems with this line of thinking because, although it seems like reducing demand for a security (i.e. tapering QE) would result in a drop in price, when you really think about how quantitative easing works this makes no sense and, secondly, the market is telling us this makes no sense. Let me explain.

Felder goes on to say in further edited excerpts:

1. Although it seems like reducing demand for a security (i.e. tapering QE) would result in a drop in price, when you really think about how quantitative easing works this makes no sense. Quantitative easing has been effective in supporting the economy through the wealth effect. It has encouraged investors to shun low-risk, low-yielding investments for higher-risk investments (if you can even classify them as investments). This has resulted in a surge in the prices of stocks, corporate bonds, real estate, etc. over the past five years with a greater effect on the riskiest categories within those asset classes: money-losing tech and biotech stocks, junk bonds and leveraged loans, etc. As a result investors feel wealthier and thus they spend more. They’re happy and the Fed’s happy because the economy’s happy

Now that all of this is ending what should we reasonably expect as a result? To my mind, if QE is an inflationary force, intended to boost the economy, its removal can only have a net deflationary effect on the economy. For those unaware, inflation is bearish for bonds (rising rates = lower bond prices) and deflation is bullish (lower rates = higher bond prices).

2. This isn’t just my personal opinion. This is exactly what the market is telling us. I’ve shared this chart before. It shows the history of quantitative easing and how various assets have been affected. 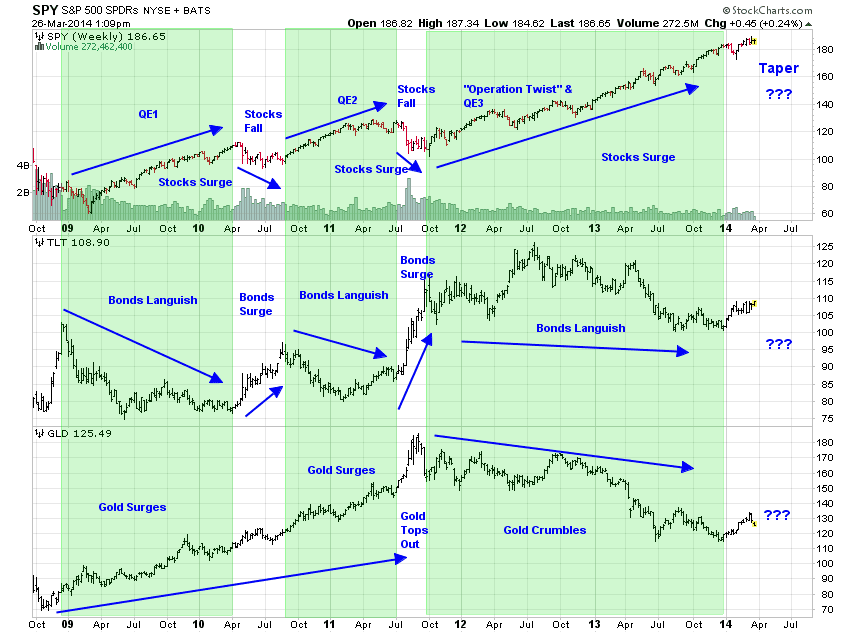 At the end of the prior QE programs it’s plain to see that not only did bonds fail to “crash” they actually surged in price.

I believe investors fled to bonds in these two prior circumstances for two reasons: 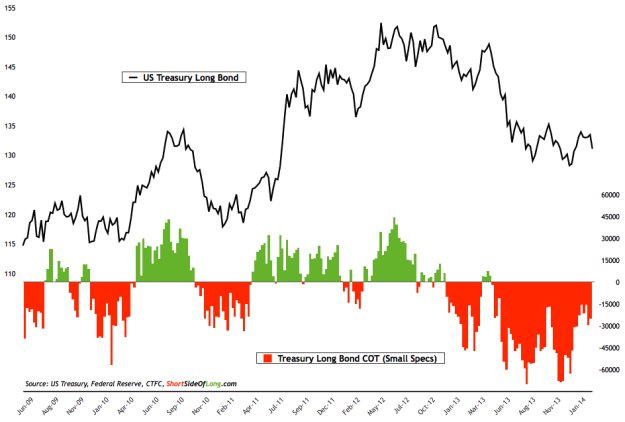 Notice that traders are once again heavily short the long bond. In the past this sort of positioning has led to strong moves higher as traders cover their shorts. Right now, though, the Fed isn’t technically ending QE, but merely tapering it’s purchases. I think this is why this trade has been a bit messier than those QE end trades of the past few years. Bonds have risen but they haven’t quite “surged” as they have in the past. Still, Janet Yellen has said that the Fed intends to continue tapering until the bond buying is ceased entirely so the result should eventually be the same.

Time will tell if they are actually capable of removing this stimulus completely without seeing the economy stumble, but this is exactly what the charts are saying. JC Parets, of All Star Charts, recently called the daily chart of the long bond, “one of my favorite charts in the world,” as it looks like it is now breaking out to new highs, a very bullish development: 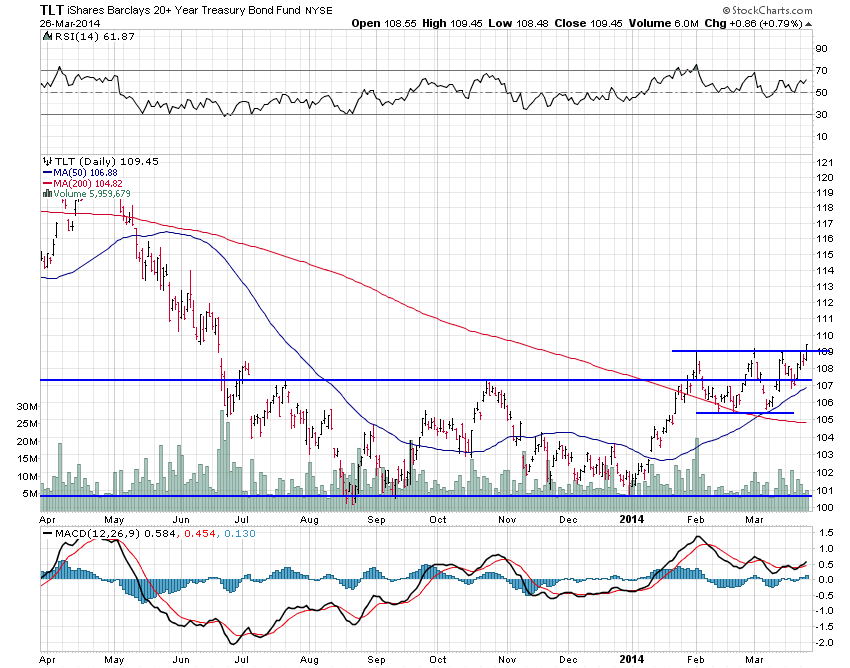 Conversely a long-term look at the yield on the 10-year treasury bond shows it is still well within a very clear downtrend:

I wouldn’t consider this a “rising rate environment” until this downtrend is convincingly broken. In fact, the only rates that seem to be rising lately are on the short end of the yield curve which has flattened considerably since the Fed began its tapering its QE program:

Note that, “the slope of the yield curve is one of the most powerful predictors of economic growth, inflation and recessions.” The curve is still positive but the fact that it’s flattening suggests we should be more worried about a reduction in “economic growth” and “inflation” than the opposite.

The bottom line is I just don’t see any evidence to suggest that we are in anything resembling a “rising rate environment” or that one is even anywhere on the horizon. This is not to say that somewhere down the road there may be consequences for the Fed’s easy policies and one of those may be rising rates. It’s just not happening right now.

1. What Affect, If Any, Will Rising Interest Rates Have On the Stock Market

The belief is that rising interest rates (as is currently occurring) are a sign that the economy is improving as activity is pushing borrowing rates higher. In turn, as investors, this bodes well for corporate profitability which supports the current valuations of stocks in the market. While this seems completely logical the question is whether, or not, this is really the case? Read More »

There is one vitally important number that everyone needs to be watching right now, and it doesn’t have anything to do with unemployment, inflation or housing. If this number gets too high, it will collapse the entire U.S. financial system. The number that I am talking about is the yield on 10 year U.S. Treasuries. Here’s why. Words: 1161; Charts: 2 Read More »

3. Don’t Worry About the Threat of Higher Interest Rates Hurting Stocks – Here’s Why

History clearly shows that stocks don’t fall during periods of rising interest rates. Sure, they might fall a little when a rate hike is announced – maybe for a week or so – but they usually bounce back quickly – and then they go higher. Read More »

It seems that the past few years of falling interest rates have lulled a big part of the global economy into financing with variable-rate debt…[As such,] when interest rates go up (as they did last week), there’s a world-wide reset in interest costs that, best case, amounts to a tax increase on individuals and businesses and, worst-case, threatens to blow up the whole system. Read More »

What does it look like when a 30 year bull market ends abruptly? What happens when bond yields start doing things that they haven’t done in 50 years? If your answer to those questions involves the word “slaughter”, you are probably on the right track. Right now, bonds are being absolutely slaughtered, and this is only just the beginning. So why should the average American care about this? Read More »

The global financial system is potentially heading for massive amounts of trouble if interest rates continue to soar. So what does all this mean exactly? [Let me explain.] Read More »

7. Rising Interest Rates Could Plunge Financial System Into a Crisis Worse Than 2008 – Here’s Why

If yields on U.S. Treasury bonds keep rising, things are going to get very messy. What we are ultimately looking at is a sell-off very similar to 2008, only this time we will have to deal with rising interest rates at the same time. The conditions for a “perfect storm” are rapidly developing, and if something is not done we could eventually have a credit crunch unlike anything that we have ever seen before in modern times. Let me explain. Read More »

8. What Causes Interest Rates to Rise? Is That Good or Bad?

9. A Rise in Interest Rates Would Derail An Economic Recovery – Yes or No?

[While]… I am not currently predicting an acceleration in inflation [I believe]…that the risk of interest rate instability is very real [given that] core inflation is already above a key benchmark that the Fed has staked its credibility on,. It should be of concern to investors that, despite economic growth being so anemic and overall resource utilization being so low (including human resources), there is currently very little margin for error on the inflation front. [In this article the author evaluates the danger that rising interest rates could potentially have on the U.S. economy.] Words: 2050 Read More »

Share
Previous Noonan: The U.S. Dollar’s Demise Was Orchestrated By the Fed – Here’s How
Next The Number of Corporate Executive Suicides Are Escalating!