…[Buying the dips these days] will undoubtedly be construed as…buying

opportunities by the well-trained seals and computerized algos which populate the Wall Street casino. That, [however,] could be a fatal mistake for one overpowering reason: The radical monetary policy experiment behind this parabolic graph is in the final stages of its appointed path toward self-destruction. Let me explain.

The above introductory comments are edited excerpts from an article* by David Stockman (davidstockmanscontracorner.com/) entitled Don’t Buy This Dip: The Fed Is Not Your Friend.

Stockman goes on to say in further edited excerpts:

In fact, this soaring index reflects the most artificial, unsustainable and dangerous Fed created financial bubble ever. That’s because its was the untoward product of a completely busted monetary mechanism.

What has happened is that the Fed’s historic credit expansion channel of monetary transmission has been frozen shut ever since day one of the massive Bernanke monetary expansion which began in August 2007, but went into warp-drive in the weeks after the Lehman event a year later. This madcap money printing campaign was a drastic error because it failed to account for the immense roadblock to traditional monetary stimulus that had been built up over the last several decades—namely, “peak debt” in the household and business sector.

The monetary easing and drastic interest rate cuts have not elicited a surge of consumer borrowing and business capital spending and hiring as during past business cycle recoveries. Instead, the entire tsunami of monetary expansion has flowed into the Wall Street gambling channel, inflating drastically every asset class that could be traded, leveraged or hypothecated. Stated differently, 68 months of zero interest rates had virtually no impact outside the the canyons of Wall Street but, inside the casino, they provided virtually free money for the carry trades, causing an endless bid for leveragable and optionable financial assets.

Now that the monetary flood is cresting, financial asset values hang in mid-air like Wile E. Coyote. Stranded there, they are nakedly exposed to market discovery any moment now that the real economy and sustainable corporate earnings dwell in a region far below.

That the credit channel of monetary expansion is busted and done is patently obvious in the data on the household sector. Below is both the current track of total household debt since the December 2007 peak, 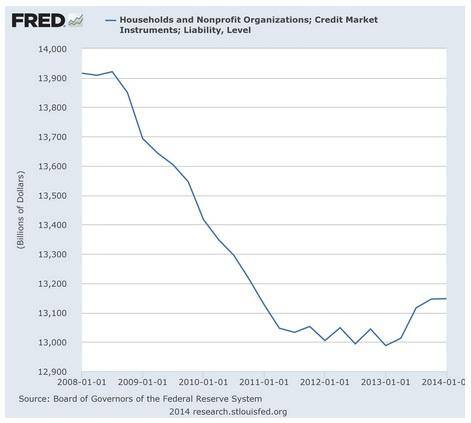 and the prior Greenspan housing bubble track. 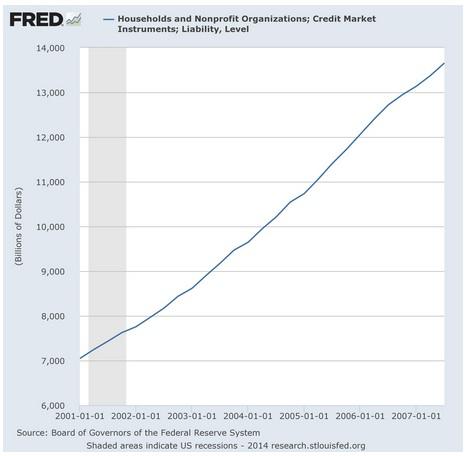 The latter turns out to be the last hurrah for the essential Keynesian “stimulus” gambit of the last several decades, which is to say, the one-time LBO of household balance sheets.

During the 78 months since the last peak, household credit has shrunk by 5%. Nothing like this has every happened before. Not even remotely close and, in truth, the relevant shrinkage has been even greater, since more than 100% of the slight up-tick in borrowing shown in the first graph [above] for recent quarters is owing to the explosion of student debt.

By contrast, the traditional source of household “borrow and spend”—-mortgage borrowings and credit card debt—-is still below its 7-year ago peak. Needless to say, this contrasts dramatically with the 78 month path after the 2001 cycle peak. During the Greenspan housing and credit bubble, household debt soared by nearly 90%, providing a robust, if temporary, boost to the consumption component of GDP.

The reason for the sharp difference in the most recent cycle is that Keynesian stimulus was always an economic trick, not an permanently repeatable exercise in enlightened monetary management. Quite simply, the US household balance sheets—-as measured by outstanding credit market debt relative to wage and salary income—got used up during the decades after the nation’s fiat money debt binge incepted [?] at the time of Camp David in August 1971.

Now, in fact, the household leverage ratio has rolled over and is slowly retracing toward the still dramatically lower and more healthy levels that prevailed prior to 1971 [see chart below]. In this context, it is surely the case that household leverage will continue to fall—-zero interest rates notwithstanding—– because it is a demographic given. The 10,000 baby boomers retiring each and every day between now and 2030 will not be adding to household debt; they will be liquidating it. What this means is that the motor force of traditional Keynesian expansion is gone. 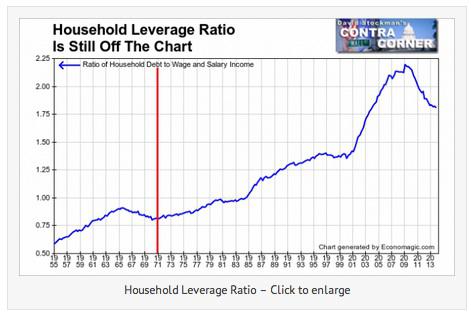 Household consumption spending, perforce, can now grow no faster than household income and economic production, and likely even more slowly than that. The coming funding crisis of the social insurance entitlements—Medicare and Social Security—will surely jolt the American public into a realization that higher private savings will be essential to retirement survival. Accordingly, the household savings rate has nowhere to go but up in the years just ahead. 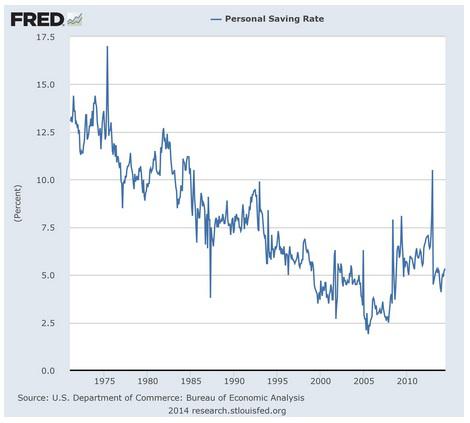 In any event, it is no mystery as to why business capital spending remains stuck on the flat-line. During the most recent quarter, real spending for plant and equipment was still 4% below its late 2007 peak——an outcome that is not even remotely comparable to the 10-25% surges that have occurred during comparable periods of prior business cycles. Business is not rushing to the barricades to add to capacity because it is plainly evident that consumer demand is not growing at traditional recovery cycle rates; and that it will never again do so given the constraints of peak debt and the baby boom retirement cycle ahead.

As shown in the chart below, in fact, real net investment in CapEx—after allowance for depreciation of assets currently consumed—- is on a declining trend [which]:

At 19.5X reported LTM earnings, the S&P 500 is at the tippy top of its historical range, and at the point that it has invariably stumbled into a deep correction so why is it rational to capitalize at even historic average PE multiples the earnings of an economy that is clearly locked into a low/no growth mode for as far as the eye can see? In truth, the market’s PE multiple should be well below the historic average generated during recent decades when Keynesian policy-makers were busy using up the nation’s balance sheets on a one-time basis in a nearly continuous campaign to stimulate credit-fueled growth. At the end of the day, even the heavily massaged data from the Washington statistical mills cannot hide this reality. 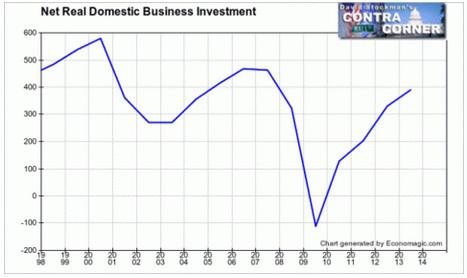 Setting aside the short-run inventory swings which cloud the headline GDP numbers each quarter, and which accounted for nearly half of the 4% gain reported for Q2, real final sales tell the true story. Notwithstanding the Fed massive balance sheet expansion since its first big rate cut in August 2007—-that is, from $800 billion to $4.4 trillion—–real final sales have grown at less than a 1% CAGR since then.

There is nothing like this tepid rate of trend growth for any comparable period in modern history. Indeed, given the clear bias toward under-reporting inflation in the BEAs GDP deflators, it is probable that during the last seven years the real economy has grown at a rate not far from zero.

All of the above means that the financial markets are drastically over-capitalizing earnings and over-valuing all asset classes so, as the Fed and its central bank confederates around the world increasingly run out of excuses for extending the radical monetary experiments of the present era, even the gamblers will come to recognize who is really the Wile E Coyote in the piece.  Then they will panic.

Brace yourself! The stock market is ripe for a nasty selloff according to a number of politicians and even more market pundits – but not so fast. Two very reliable long-term recession indicators strongly suggest that a correction – or worse, the end of the bull market – is highly unlikely given the current state of the economy. Let me explain. END_OF_DOCUMENT_TOKEN_TO_BE_REPLACED

2. Stock Market Bubble to “POP” and Cause Global Depression

In their infinite wisdom the Fed thinks they have rescued the economy by inflating asset prices and creating a so called “wealth affect”. In reality they have created the conditions for the next Great Depression and now it’s just a matter of time…[until] the forces of regression collapse this parabolic structure. When they do it will drag the global economy into the next depression. Let me explain further. END_OF_DOCUMENT_TOKEN_TO_BE_REPLACED

3. All Is NOT Hunky Dory In the Stock Market – Here’s Why

We look at this market and we see “too much.” Too much divergence, too much complacency, too much embedded downside risk…the list goes on and covers many things. Let’s make the rounds and see what we find [and what it means for the immediate well-being of the various stock markets.] END_OF_DOCUMENT_TOKEN_TO_BE_REPLACED

4.  Mixed Signals About Direction of Stock Market Abound – Here Are 10

[No wonder you are confused!] Several technical and fundamental indicators have flashed caution to no avail and this has given way to an uncomfortable tension beneath the surface as investors try to find answers while keeping pace with performance. Below are 10 mixed signals about the near-term direction and theme of the markets. END_OF_DOCUMENT_TOKEN_TO_BE_REPLACED

5. Risk Aversion Has Run Its Course. What Are the Implications for the U.S. Economy Going Forward?

With QE now winding down, the economy facing reduced headwinds, and risk aversion beginning to decline, risk taking is beginning to increase and that is an essential ingredient for healthier economic growth. END_OF_DOCUMENT_TOKEN_TO_BE_REPLACED

So much analysis we see and hear lately is concerned with whether the stock market is in a bubble or not. The truth of the matter, however, is that bear markets do not begin due to bubble-level valuations being reached and then bursting, but in anticipation of half a dozen mitigating factors as outlined in this article. END_OF_DOCUMENT_TOKEN_TO_BE_REPLACED

There are a number of potential pitfalls out there for the market but, right now, the behavior of the main catalysts for a major correction suggest that there continues to be more right than wrong with the market. Let me explain. END_OF_DOCUMENT_TOKEN_TO_BE_REPLACED

Share
Previous What Does Current Money Velocity Say About A Future Rise In Interest Rates?
Next What Does the 10-year Yield’s Death Cross Mean For Stocks? (+3K Views)