Interest Rates to Remain Low As Far As the Eye Can See? Perhaps, BUT…(+2K Views)

is not whether they will rise, but when and by how much. [This article analyzes when that will most likely be.]

The above introductory comments are edited excerpts from an article* by Scott Grannis (scottgrannis.blogspot.ca) entitled The outlook for interest rates.

Grannis goes on to say in further edited excerpts:
…The market thinks the Fed is almost certainly going to end the tapering of QE3 in October, and about six months later, give or take a few months, the Fed is expected to start raising short-term rates. They will probably do this by increasing—very slowly—the interest rate they pay on bank reserves, using reverse repo transactions, and by not rolling over maturing Treasuries and MBS.
The graph below shows the Treasury yield curve at different points in time: April 2013 (the all-time low for the 10-yr Treasury yield), today, and two and five years in the future. The latter two are derived mathematically from the current Treasury curve…

The Fed is expected to raise short-term rates in a very gradual fashion beginning next year, and five or so years from now rates are going to be topping out around 3½ to 4%. 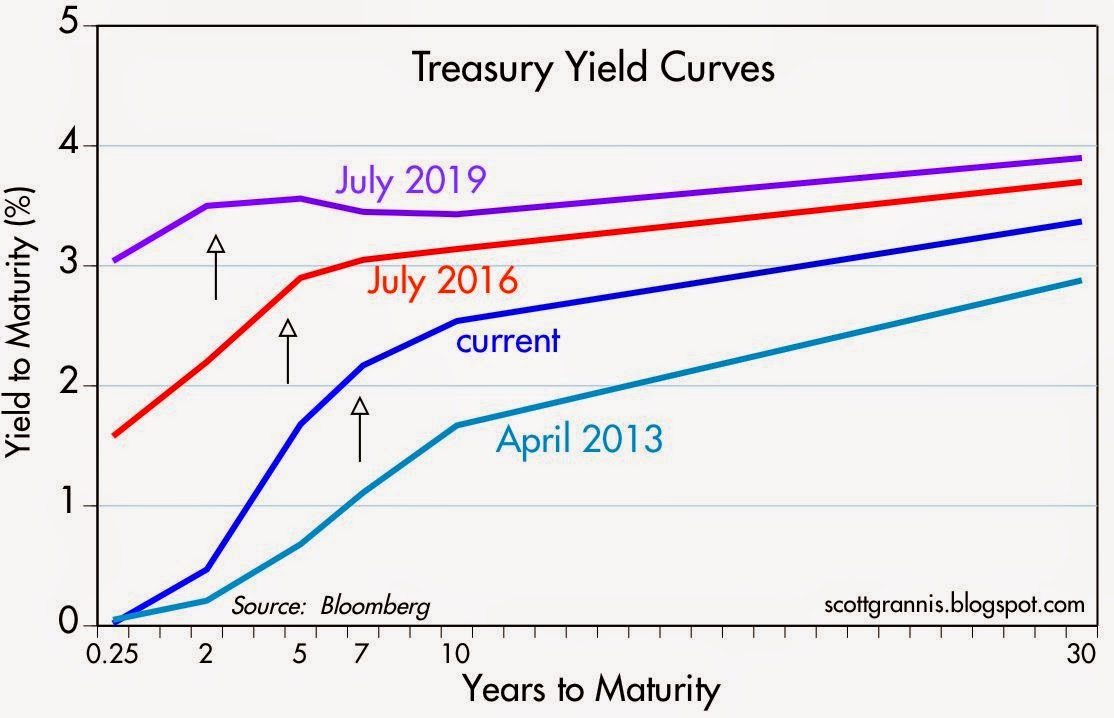 There’s nothing very scary about this. As the graph below shows, for most of modern history 5-yr Treasury yields have traded well in excess of 3%. That 5-yr yields today aren’t expect to rise above 4% for as far as the eye can see is pretty unusual from an historical perspective. 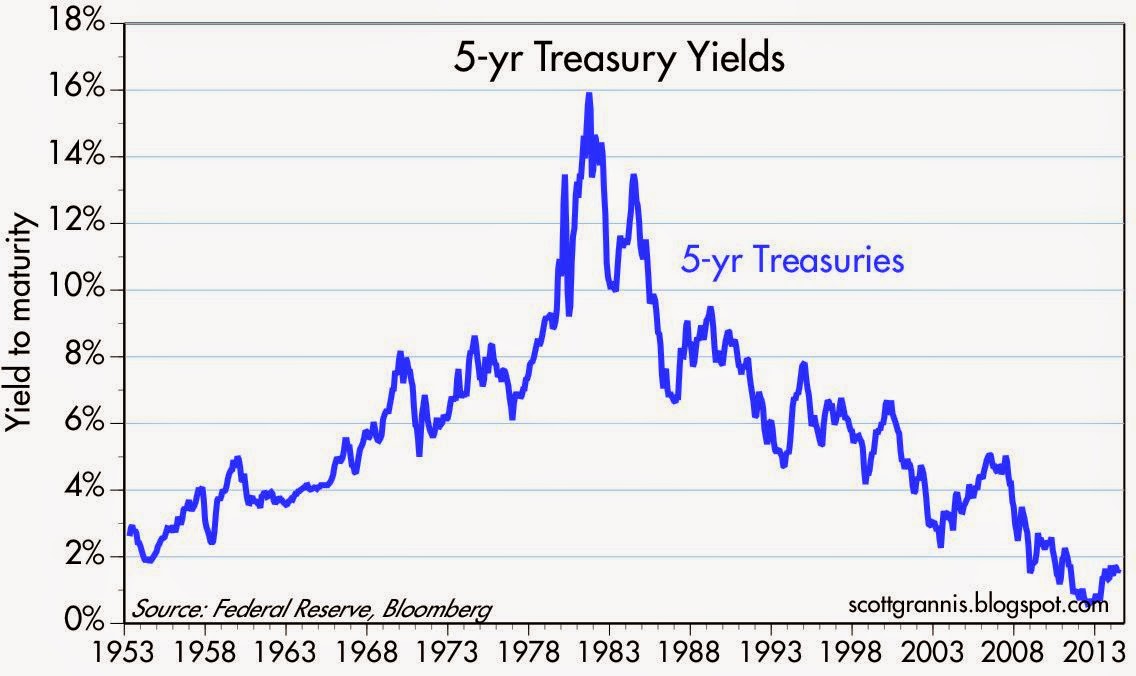 Interest rates aren’t expected to rise by much because:

In other words, the bond market today seems fairly convinced that growth will be sluggish and inflation will therefore be tame for as far as the eye can see.

If you disagree with the assumptions behind the market’s current consensus, then you can take actions to bet that interest rates will be either higher or lower than current expectations:

For my part, I acknowledge that I have been overly concerned about rising interest rates for most of the past 5 years or so. Being wrong for so long is humbling, but it is not a reason to shy away from worrying about a faster-than-expected rise in interest rates today. In the end, it’s all about what happens to the economy and to inflation. 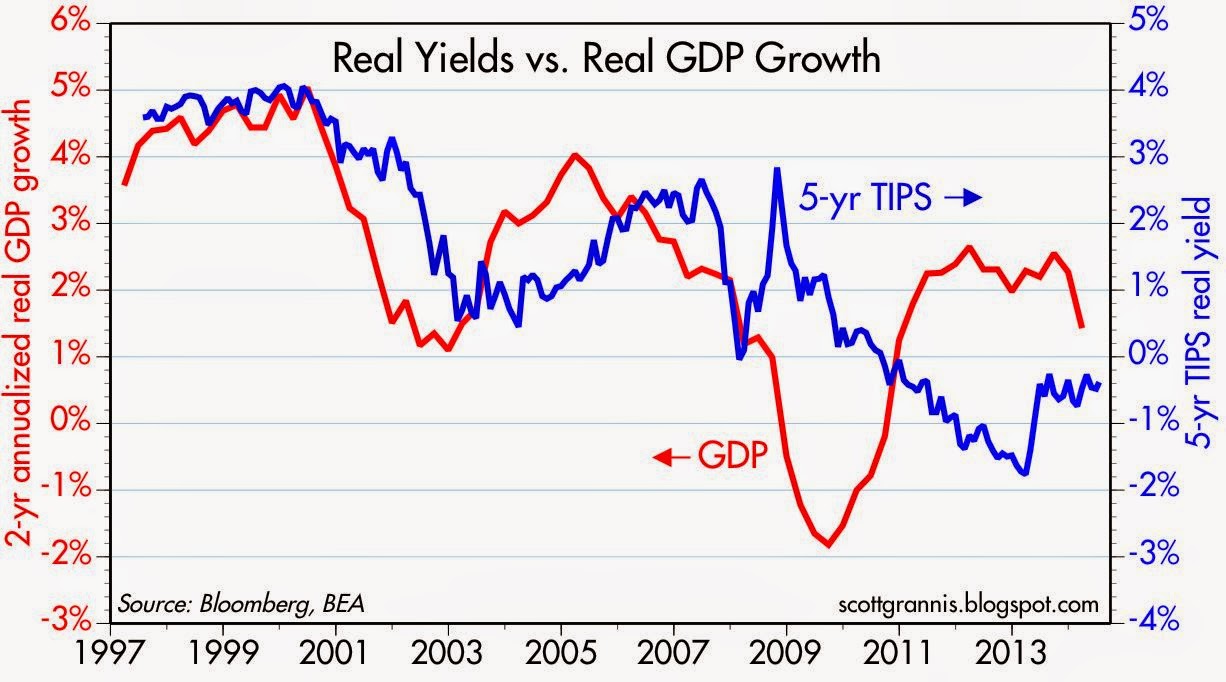 I’m still an optimist on the economy, since I think the market’s growth expectations are overly pessimistic. I think 5-yr real yields on TIPS tell us a lot about the market’s underlying expectations for real economic growth.

As the graph above suggests, the current -0.38% real yield on 5-yr TIPS points to economic growth expectations of perhaps 1% per year, which in turn is a bit less than we’ve seen in recent years. If the market were convinced that future growth would be a solid 3% a year, then real yields today would be a lot higher than they are now. I’m still more worried about inflation than the market is, since I think the market is being a bit too complacent about the inflationary potential of the Fed’s massive balance sheet expansion and the Fed’s ability to reverse course in a timely fashion.

As the graph above shows, the market expects CPI inflation over the next 5 years to average a mere 2.1%, which is actually less than the 2.3% it’s averaged over the past 10 years. I’m not predicting hyperinflation or anything like it, I’m just saying that expecting inflation as usual for as far as the eye can see despite the Fed’s huge and unprecedented experiment in quantitative easing is a bridge too far for me.There’s nothing scary about expecting interest rates to rise more than expected. Rates aren’t likely to surprise on the upside unless real growth expectations and/or nominal GDP expectations rise, and given the pessimism inherent in the market’s current expectations, either one of those would be very welcome developments.
Conclusion
Interest rates are a good barometer of the market’s expectations for growth and inflation. That they are still so low today means that the market holds little hope for any meaningful improvement in the outlook for the economy and/or any meaningful rise in inflation.
We’re living in a slow-growth, low-inflation world for now, and—as often occurs just before something hits us from left field—the market is extrapolating that today’s conditions will prevail for as far as the eye can see.

1. Political “Blame Game” Will Adversely Affect Your Portfolio – Here’s Why & How

The S&P 500 continues to hit new all time highs, but is your portfolio built on a house of cards? The politics to kick the proverbial can down the road may unleash dynamics that could be hazardous to your wealth. Here’s why and how to protect your portfolio. END_OF_DOCUMENT_TOKEN_TO_BE_REPLACED

2. Inflation or Deflation: Are We Approaching the Tipping Point?

Might our Inflation-Deflation Watch be suggesting a breakout in asset price inflation is about to take place? Could it, in fact, be presaging the start of John William’s hyper inflationary depression in which prices rise exponentially even in light of massive unemployment and bankruptcies? This article analyzes the situation. END_OF_DOCUMENT_TOKEN_TO_BE_REPLACED

3. Tips from TIPS on Prospects for Growth, Outlook for Inflation & Future for Gold

TIPS are telling us that the market is quite pessimistic about the prospects for real growth, but not concerned at all about the outlook for inflation. END_OF_DOCUMENT_TOKEN_TO_BE_REPLACED

4. Interest Rates NOT Rising Any Time Soon – Even With Fed Tapering. Here’s Why

Everyone and their mom is expecting long-term interest rates to rise now that the Fed is tapering its bond buying programs. I have a couple of problems with this line of thinking because, although it seems like reducing demand for a security (i.e. tapering QE) would result in a drop in price, when you really think about how quantitative easing works this makes no sense and, secondly, the market is telling us this makes no sense. Let me explain. END_OF_DOCUMENT_TOKEN_TO_BE_REPLACED

Share
Previous 9 Articles On Investing Worth Reading
Next Does Size (Market Cap) Matter?