What Affect, If Any, Will Rising Interest Rates Have On the Stock Market (+2K Views)

the economy is improving as activity is pushing borrowing rates higher.  In turn, as investors, this bodes well for corporate profitability which supports the current valuations of stocks in the market.  While this seems completely logical the question is whether, or not, this is really the case?

So says Lance Roberts (streettalklive.com) in edited excerpts from his original article* entitled Will Rising Rates Kill the Stock Market?.

Roberts goes on to say in further edited, and in some places perhaps paraphrased, excerpts:

The chart below shows the 10-year treasury rate versus the economy as represented by GDP. 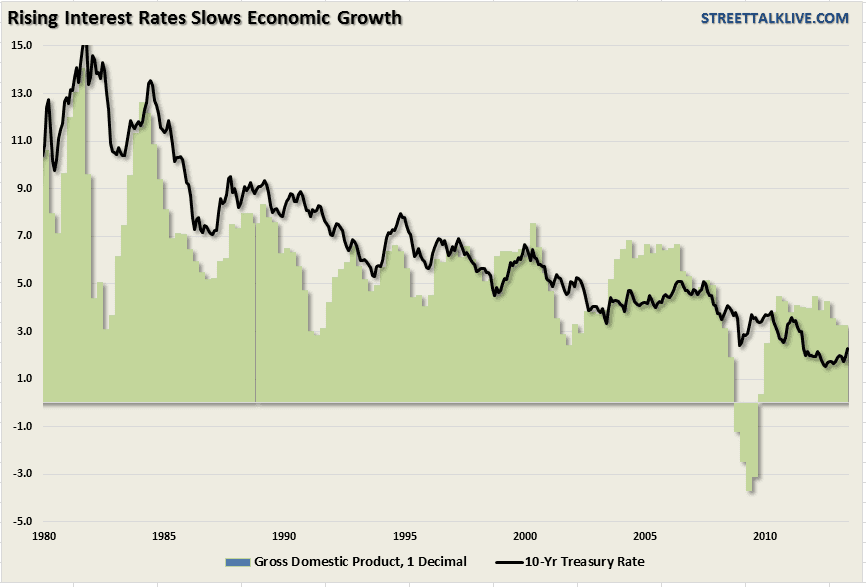 It is not surprising to find that rising interest rates negatively impact economic growth.  As I discussed in a previous article entitled Evaluating 3 Bullish Arguments: “Rising interest rates are potentially a huge problem for the markets and the economy.  Rising rates increase borrowing costs, carrying costs, and mortgages while reducing profitability, consumption and production.  If the  prognosticators of a bond market reversion are ‘right,’ like Bill Gross, it will not be good for stock market investors.”

Let me explain the above statement a little more thoroughly.   The table below lists the various bullish arguments for the stock market and the impact caused by rising interest rates: 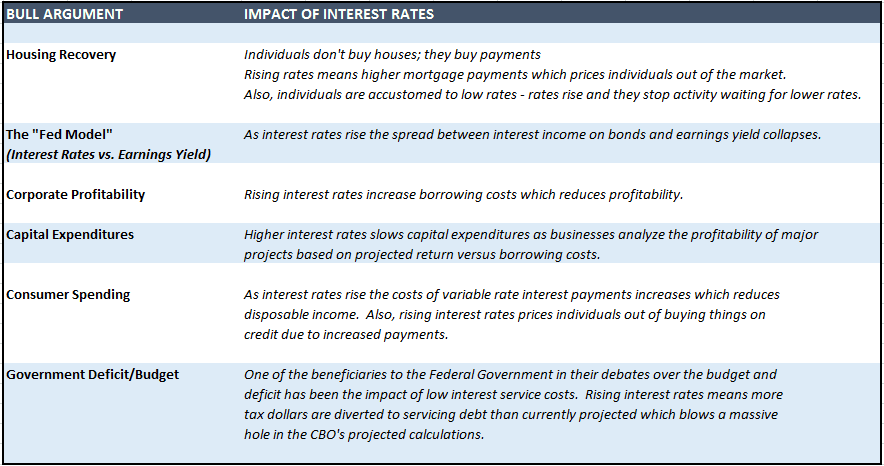 As you can see above higher interest rates are not bullish for the economy or the market overall.  However, it is important to remember that there is a significant lag effect between increases in interest rates and the impact on the markets and economy.  The problem for investors, in general, is their inherent “immediacy bias.” Investors assume that  if “Event A” doesn’t have an immediate impact on “Event B” that the analysis is wrong and that “this time is different.” The reality is that the lag effect is generally discounted by emotional biases which ultimately leads to poor investment decision making.

However, before I discuss the impact of rising rates as it specifically relates to the stock market, it is important to put the recent spike in rates into some context.  The chart below shows the long term history of the  10-year interest rate. 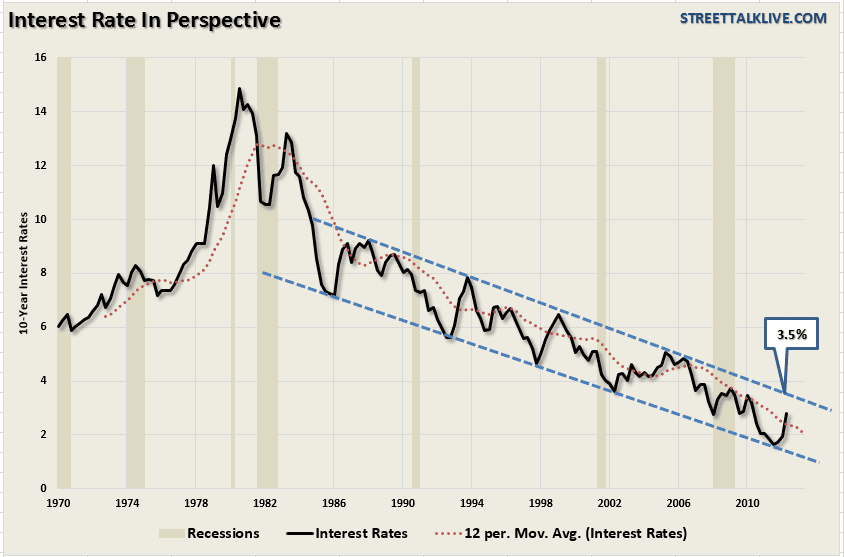 As you can see [in the chart above] the recent “spike” in rates is really nothing more than a “reversion” in rates from a historically low level back to the top of the long term downtrend.  As with all things  related to financial markets, and the economy, when things deviate well beyond their long term means (red dashed line) there is historically  a “snap-back” that occurs.   That “snap-back,” or reversion, could currently take rates back to 3.5%.  While such a level is still extremely low by historical standards it is potentially high enough to create sufficient drag on an already weak economic environment.

While the current spike in rates has caught many participants by surprise; it  is important to keep it in perspective.  At the moment nothing has changed in overall long term down trend of interest rates.  It will take increasing rates of economic growth, increases in wage growth and full-time employment,  rising monetary velocity and upwardly trending inflation to change the long term  trend of interest rates higher.   Unfortunately, at the moment, the  economic environment that currently exists is not supportive of such  factors.

If it really isn’t economic growth driving rates higher then the question  becomes what is?  As I discussed in a previous article entitled Clues To Watch For The End Of QE Infinity: “During QE programs interest rates have risen as the ‘risk’ trade pushed  money flows into stocks. However, the opposite occurred at the end of programs  as money fled from stocks and into the perceived ‘safety’ of  bonds.” 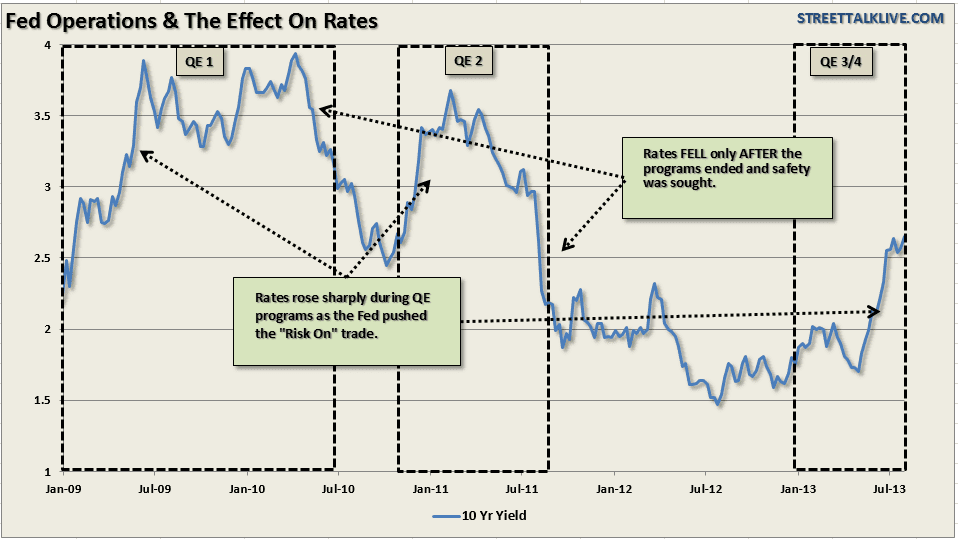 The current move higher in rates actually has much less to do with  expectations of economic recovery, despite headlines to the contrary, but rather  the impact of the Federal Reserve’s monetary interventions, (QE), on money  flows.

The problem for stock market investors is that the impact of rising rates is a clear negative on the economy and the stock market.  As shown in the  chart below – historical spikes in interest rates have always led to weaker  stock market performance. 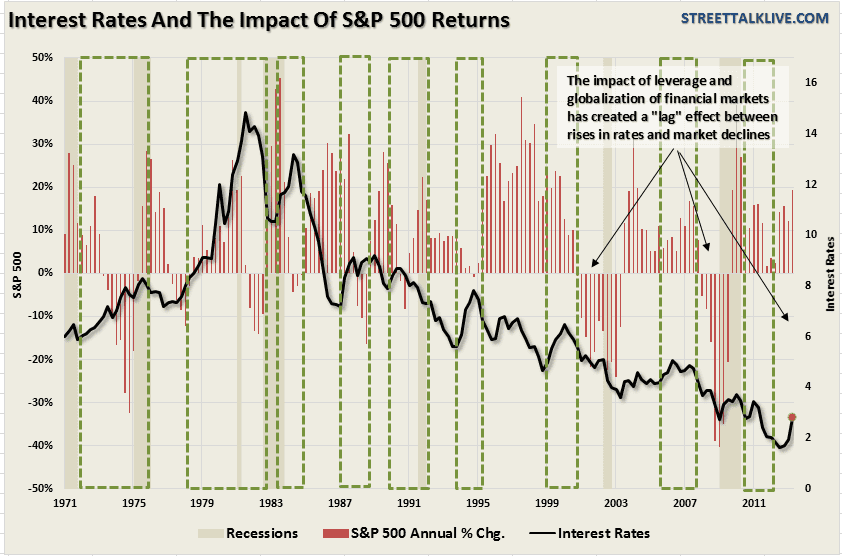 As discussed in the table above increases in interest rates slow economic  activity, with a lag effect, which negatively impacts earnings, margins and  forward guidance.  Ultimately, and it may take several quarters to manifest  itself fully, the fundamental deterioration leads to a reversion in stock market  prices.  As noted in the graph that “lag effect” has  become much more pronounced since the turn of the century due to the impact of  liquidity (from both the equity extraction during the housing bubble  and QE programs currently), leverage via margin debt, and globalization of  the markets through program trading.  Regardless, the impact of higher  interest rates will eventually negatively impact market returns which will then lead to the next decline in rates.

There are two important considerations.

While the Federal Reserve may only slow their rate of bond purchases in the near future, less accommodative action is the same  as ”tightening” monetary policy.  That decrease of policy accommodation will be amplified by the rise in interest rates which could, conceivable, create a bigger problem that the Fed and market participants are anticipating.

While the current increase in interest rates hasn’t created  any issues just yet – it certainly doesn’t mean that the pot won’t boil over the  minute we quit paying attention to it.

What does it look like when a 30 year bull market ends abruptly? What happens when bond yields start doing things that they haven’t done in 50 years? If your answer to those questions involves the word “slaughter”, you are probably on the right track. Right now, bonds are being absolutely slaughtered, and this is only just the beginning. So why should the average American care about this? Read More »

The global financial system is potentially heading for massive amounts of trouble if interest rates continue to soar. So what does all this mean exactly? [Let me explain.] Read More »

3. What Will Cause Interest Rates to Rise? Will That Be Good or Bad?

Don’t get too worked up over interest on the national debt or what will happen when interest rates rise because, by then, we’ll likely be talking about ways to cool down the economy. [Why?] Because interest rates on US government debt are really a function of economic growth. If the economy is weak the Fed will pin short rates to stimulate the economy and if rates rise it’s going to be a function of better days ahead. Words: 525

4. A Rise in Interest Rates Would Derail An Economic Recovery – Yes or No?

[While]… I am not currently predicting an acceleration in inflation [I believe]…that the risk of interest rate instability is very real [given that] core inflation is already above a key benchmark that the Fed has staked its credibility on,. It should be of concern to investors that, despite economic growth being so anemic and overall resource utilization being so low (including human resources), there is currently very little margin for error on the inflation front. [In this article the author evaluates the danger that rising interest rates could potentially have on the U.S. economy.] Words: 2050

5. This False Stock Market Bubble Will Burst, Major Banks Will Fail & the Financial System Will Implode! Here’s Why

At some point we are going to see another wave of panic hit the financial markets like we saw back in 2008. The false stock market bubble will burst, major banks will fail and the financial system will implode. It could unfold something like this: Words: 660 Read More »

Right now, interest rates are near historic lows. The U.S. government is able to borrow gigantic mountains of money for next to nothing. U.S. consumers are still able to get home loans, car loans and student loans at ridiculously low interest rates. When this low interest rate environment changes (and it will), it is going to absolutely devastate the U.S. economy. Without low interest rates, the U.S. financial system dies. [Let me explain.] Words: 1529 Read More »

Share
Previous U.S. Energy Independence Is A Pipe Dream!
Next Stock Markets Look Ripe For a MAJOR Correction – Here’s Why

4 of 5 Cannabis Categories Declined +20% In April; One Advanced

Bull & Bear Markets: What You Need To Know

Relax! There Is Still Significant Upside Ahead For the Stock Market