Lorimer Wilson September 13, 2014 Comments Off on High Inflation IS Coming – It’s Just A Question Of When – Here’s Why 2,379 Views

There have been many econoblog posts of the form, “ha, ha, the people predicting inflation have been wrong so far, when will they give up?”. Let me try to explain why we know high inflation is coming eventually.

The above introductory comments are edited excerpts from an article* by Vincent Cate (howfiatdies.blogspot.ca/) as posted on SeekingAlpha.com under the title  How We Know High Inflation Is Coming.

Cate goes on to say in further edited excerpts:

The equation of exchange shows the relationship between the money supply, velocity of money, price level, and real GNP. This equation is a tautology that no competent economist would argue against. 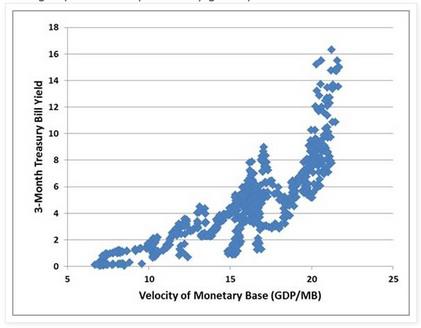 At first when the Fed makes new money and buys bonds, they increase the price of bonds, which means they lower the interest rate. Hussman’s data shows this lowers the velocity of money. The lower velocity can compensate for the increased quantity of money so that often new money does not cause inflation right away. 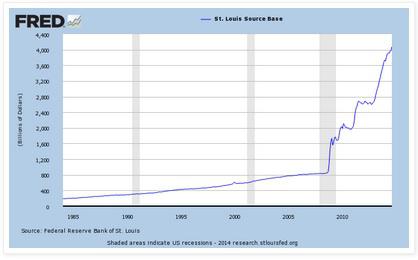 Since we have so far avoided inflation, the velocity of base money must have gone down by about a factor of 4 during this same period. The way this happened is that most of the new base money the Fed has made has just sat still in the Fed as excess reserves. This huge amount of non-moving money lowers the overall average velocity of money. If you think about it, it makes sense that making new money that does not leave the Fed should not cause inflation. Paying higher interest on excess reserves than short term bonds were paying was Bernanke’s great new trick to hide a few trillion dollars out in the open. 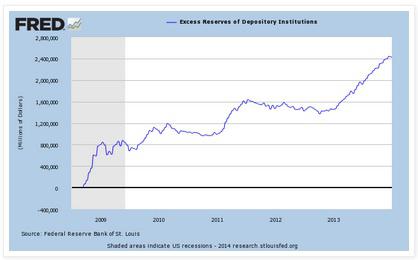 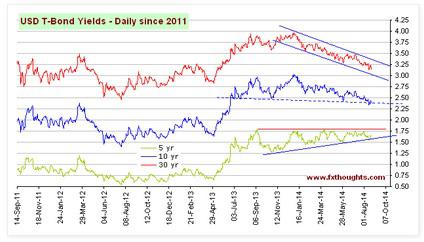 For the velocity of money to return to normal, it is reasonable to expect the excess reserves at the Fed will enter the real economy. There are those who think these excess reserves are somehow trapped but a bank with excess reserves can send an armored truck to the Fed and withdraw paper Federal Reserve Notes with no restrictions on them. This could happen at any time and possibly very suddenly. A couple trillion dollars suddenly flowing into the real economy would clearly result in high inflation.

Even Krugman has said that increasing the money supply is only safe when interest rates are near the zero lower bound. With interest rates going up, even by Krugman’s logic, we should expect inflation.

Here is another way to look at it. From 1913 to 2007 the Fed made about $800 billion in new money total. Since then it makes around that much each year. Nearly 94 years worth of money every 12 months. In this environment, one should expect to see “too much money chasing too few goods”.

Another way to look at it. In order to not cause inflation the central bank would need to be able to withdraw all the new money they created. There is just no way this can happen. Interest rates would shoot up, the value of the bonds the Fed held would crash, and they could not sell them for enough to withdraw as much money as they created.

High inflation will come. It is just a question of when.

1. Inflation or Deflation: Are We Approaching the Tipping Point?

Might our Inflation-Deflation Watch be suggesting a breakout in asset price inflation is about to take place? Could it, in fact, be presaging the start of John William’s hyper inflationary depression in which prices rise exponentially even in light of massive unemployment and bankruptcies? This article analyzes the situation. END_OF_DOCUMENT_TOKEN_TO_BE_REPLACED

2. These 21 Countries Have Experienced Hyperinflation In the Last 25 Years

3. Fed & Yellen So Far Behind Inflation Curve Chance of Hyperinflation Is Now 35%! Here’s Why

At the end of last year virtually every every single economist expected interest rates to rise this year as the Fed tapered their purchases and the economy improved but, in fact, interest rates on the 10 year U.S. Treasury have been going down year to date (from 3% to 2.5% after rising from about 1.6% to 3% last year). The masses, going along with this crowd, got fooled but we have been calling for a decline in interest rates for some time now due to world-wide deflation and it couldn’t be clearer to us that this is the most likely scenario for the United States. Let us explain. END_OF_DOCUMENT_TOKEN_TO_BE_REPLACED

5. Tips from TIPS on Prospects for Growth, Outlook for Inflation & Future for Gold

TIPS are telling us that the market is quite pessimistic about the prospects for real growth, but not concerned at all about the outlook for inflation. END_OF_DOCUMENT_TOKEN_TO_BE_REPLACED

Don’t listen to what the official numbers say. Inflation is a big problem already for the U.S. economy – and in an inflationary environment, gold bullion goes up and stock prices go down, because materials cost more and consumers spend less. I’d adjust my portfolio accordingly for the rapid inflation that awaits us. END_OF_DOCUMENT_TOKEN_TO_BE_REPLACED

7.  Inflation: What You Need to Know

The March year-over-year inflation rate was 1.51%, which is well below the 3.88% average since the end of the Second World War and 37% below its 10-year moving average. END_OF_DOCUMENT_TOKEN_TO_BE_REPLACED

8. Ignore the Hype: Inflation Is NOT That High – Anywhere!

There is very little evidence of high inflation at present, despite what the hyperinflationists say, and a little bit of common sense totally debunks the idea that there is. END_OF_DOCUMENT_TOKEN_TO_BE_REPLACED

The global financial system is potentially heading for massive amounts of trouble if interest rates continue to soar. So what does all this mean exactly? [Let me explain.] END_OF_DOCUMENT_TOKEN_TO_BE_REPLACED

Share
Previous Your Degree of Happiness Depends On Where You Live In the U.S. – Take a Look
Next Gold Price Dependent on Extent of Money Supply NOT Direction of US Dollar Index – Here’s Why (+2K Views)