Inflation or Deflation: Are We Approaching the Tipping Point? (+2K Views)

Lorimer Wilson July 7, 2014 Comments Off on Inflation or Deflation: Are We Approaching the Tipping Point? (+2K Views) 3,014 Views

Might our Inflation-Deflation Watch be suggesting a breakout in asset price inflation is about to take place?

Could it, in fact, be presaging the start of John William’s hyper inflationary depression in which prices rise exponentially even in light of massive unemployment and bankruptcies? This article analyzes the situation.

The above introductory comments are edited excerpts from an article* by Jay Taylor (jaytaylormedia.com) entitled Are We Approaching An Inflation Tipping Point?.

The following article is presented courtesy of Lorimer Wilson, editor of www.munKNEE.com (Your Key to Making Money!),
and has been edited, abridged and/or reformatted (some sub-titles and bold/italics emphases) for the sake of clarity and brevity to ensure a fast and easy read. This paragraph must be included in any article re-posting to avoid copyright infringement.

Taylor goes on to say in further edited excerpts: 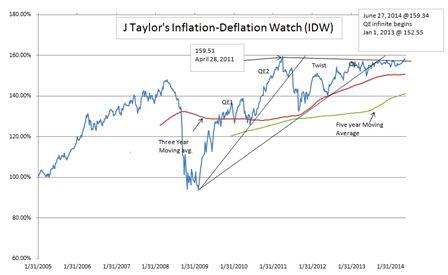 Might our IDW be suggesting a breakout in asset price inflation is about to take place? Could it in fact be presaging the start of John William’s hyperinflationary depression in which prices rise exponentially even in light of massive unemployment and bankruptcies? 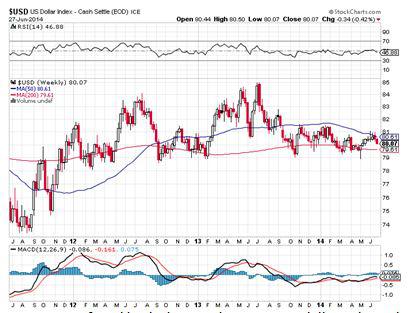 One point worth noting is that commodities…have been showing price strength of late. Copper has suddenly shown new life, especially over the last couple of weeks. It closed at $3.16 this week and is up 7.6% since its March low. Oil is up by 6.8% since its March lows and the Rogers Fund is up 9.2% since its January lows.

If we are on the precipice of a serious inflation problem, we should start to see:

Prospects for Future Hyperinflation
For the kind of hyperinflation that John Williams is steadfastly predicting, we will need to see a collapsing dollar. Looking at the moving averages above, the dollar Index closed at 80.07 this week. That’s below the 50-day moving average of 80.61 but decidedly above the 200-day average of 79.61. Obviously the really big target would be the lows in 2011, when gold made its highs. The dollar fell below 74 then. If we are to see a collapse in the dollar of that magnitude, we might start to worry but for now the prospects of that happening appear fairly slim.
Percentage of Foreign Global USD Holdings
The percentage of Global U.S. dollar liquidity that is held by foreign central banks has been in a steep decline since 2008-09. (As the Fed is printing more and more dollars, foreigners are saying, “No thanks! We don’t want more of your fraudulent currency.”) It is a trend that could catch hold with lightening speed and that would likely send global markets reeling but for that to take place, monetary velocity will have to speed up and so far there are no signs of that happening as America’s dwindling middle class who is, out of necessity, holding on to every dollar they get to buy the absolute necessities of life. Thanks a lot, Alan Greenspan! Thanks a lot, Ben Bernanke for your policies of bankrupting America and its middle class!
Conclusion
[In answer to Taylor’s question Are We Approaching An Inflation Tipping Point? the answer is “not yet.”


Editor’s Note: The author’s views and conclusions in the above article are unaltered and no personal comments have been included to maintain the integrity of the original post. Furthermore, the views, conclusions and any recommendations offered in this article are not to be construed as an endorsement of such by the editor.

1. Fed & Yellen So Far Behind Inflation Curve Chance of Hyperinflation Is Now 35%! Here’s Why

At the end of last year virtually every every single economist expected interest rates to rise this year as the Fed tapered their purchases and the economy improved but, in fact, interest rates on the 10 year U.S. Treasury have been going down year to date (from 3% to 2.5% after rising from about 1.6% to 3% last year). The masses, going along with this crowd, got fooled but we have been calling for a decline in interest rates for some time now due to world-wide deflation and it couldn’t be clearer to us that this is the most likely scenario for the United States. Let us explain. END_OF_DOCUMENT_TOKEN_TO_BE_REPLACED

Don’t listen to what the official numbers say. Inflation is a big problem already for the U.S. economy – and in an inflationary environment, gold bullion goes up and stock prices go down, because materials cost more and consumers spend less. I’d adjust my portfolio accordingly for the rapid inflation that awaits us. END_OF_DOCUMENT_TOKEN_TO_BE_REPLACED

4. Inflation: What You Need to Know

The March year-over-year inflation rate was 1.51%, which is well below the 3.88% average since the end of the Second World War and 37% below its 10-year moving average. END_OF_DOCUMENT_TOKEN_TO_BE_REPLACED

5. 21 Countries Have Experienced Hyperinflation In the Last 25 Years