Inflation: What You Need to Know (+2K Views)

The March year-over-year inflation rate was 1.51%, which is well below the 3.88% average since the end of the

Second World War and 37% below its 10-year moving average.

So says Doug Short (advisorperspectives.com) in edited excerpts from his original article* entitled A Long-Term Look At Inflation.

Short goes on to say in further edited excerpts:

My long-term inflation chart below reaches back to 1872 by adding Warren and Pearson’s price index for the years prior to 1931 when the Bureau of Labor Statistics (BLS) first began compiling CPI data earlier years…This look further back into the past dramatically illustrates the extreme oscillation between inflation and deflation during the first 70 years of our timeline. 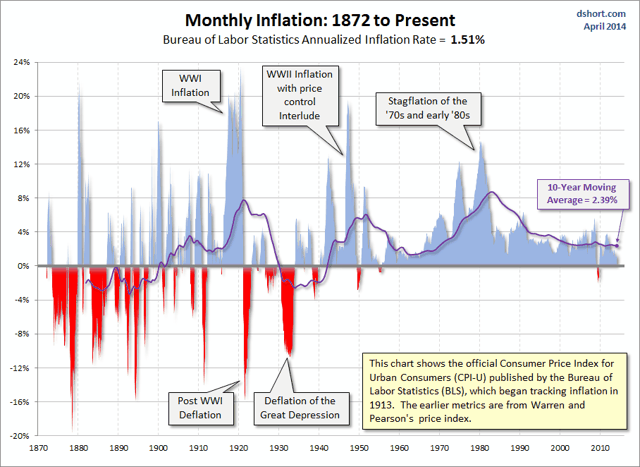 …For independent evidence that the Consumer Price Index is a reasonably accurate representation of the prices we pay, see the MIT Billion Prices Project US Daily Index. [Real-time Inflation Data is Now Available – Finally] 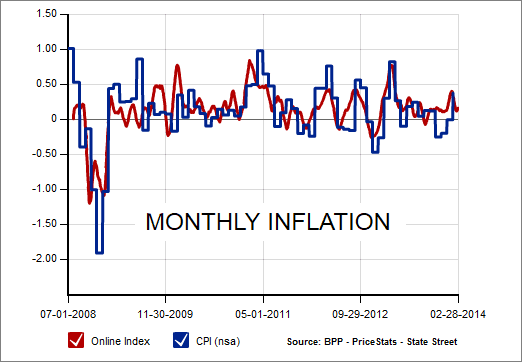 For a long-term look at the impact of inflation on the purchasing power of the dollar, check out this log-scale snapshot of fourteen-plus decades. 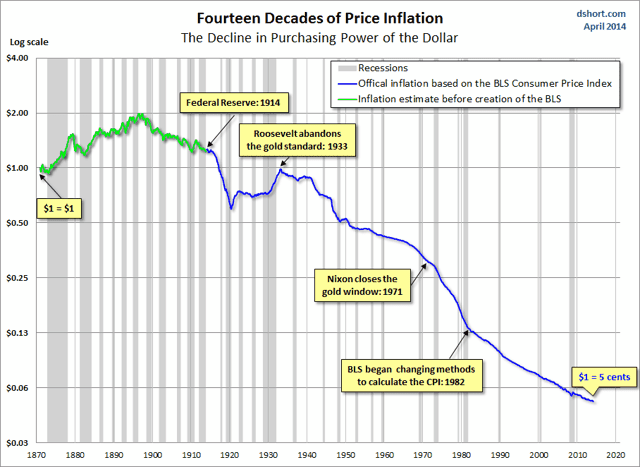 2. 21 Countries Have Experienced Hyperinflation In the Last 25 Years

3. A Hypothetical Look At What Could Possibly Be In Store for the U.S.

The economic condition of the country continues to decline toward its rendezvous with an, as yet, unknowable catastrophe. As economic and political matters become more desperate, so will what the government considers acceptable. If a debt default cannot be engineered via continuous inflation, it will occur via a direct repudiation of obligations or a quasi-surreptitious one like the hypothetical one presented in this article…a look (not a prediction) at a series of not improbable events that could develop [and which] would change our economic world overnight. Viewed from this perspective, I don’t think such a move or something approximating it is out of the question. Words: 1300

4. No Threat of Inflation This Year – Here’s Why

On the surface, policy settings around the world look very inflationary with large fiscal deficits and aggressively easy monetary policies yet it is hard to see inflation gaining any traction [with] global activity so weak and the monetary transmission process so impaired in many countries. There is more of a deflationary than inflationary tone to the economic environment and it does not look as if this will change any time soon.

7. Inflation: Who Have A More Inflated View – Men or Women?

The public’s estimates and predictions of inflation are significantly, and systematically, related to the demographic characteristics of the respondents…[and] even after we hold constant income, age, education, race, and marital status…women in our survey tended to think inflation was 1.9 percentage points higher than men. [There are more interesting findings, so read on.] Words: 987

8. Runaway Inflation That Would Devastate USD Seems Unlikely – Here’s Why

Many investors are treating inflation as a certainty because the Fed has expanded its balance sheet to unheard of levels through its quantitative easing strategy. Some have even gone so far as to say that this program will utterly destroy the U.S. currency. To demystify this conclusion, I’m going to explain quantitative easing and why the Fed is using this monetary strategy. Afterward, I’ll explain why gold is still positioned to rise even if inflation continues to be low. Words: 786

9. Once Inflation Starts There Will Be NO Stopping It!

10. James Turk Interviews Robert Prechter: Which Will It Be – Hyperinflation or Massive Deflation?

11. Major Inflation is Inescapable and the Forerunner of an Unavoidable Depression – Here’s Why

12. Major Price Inflation Is Coming – It’s Just a Matter of Time! Here’s Why

13. High Inflation is Coming but Hyperinflation is Highly Unlikely – Why is That?

It is difficult to say exactly when hyperinflation will hit a currency. However, I am convinced that the danger level is so high for most fiat money that it is worthwhile for everyone to increase their understanding of hyperinflation. This is the first part of a Hyperinflation FAQ for frequently asked questions or objections about hyperinflation. Words: 1600 Read More »

15. and the Winner of the DE-flation/IN-flation Battle is About to Be….?

Many investors are positioning their portfolios based upon their opinions as to whether or not we will encounter IN-flation or DE-flation. Well, what the MS Commodity Index (CRX) does over the next few weeks might tell us a good deal about how to best position one’s portfolio. Take a look at the latest CRX graph below for an indication. Read More »

16. Deflation: What You Need to Know (and Fear) & How to Prepare for Such an Eventuality

All in all, deflation should be one of the most serious words in a commodity investor’s vocabulary and is something to always keep an eye on. While its presence may seem removed from our economy, the possibility always remains and preparation will be key to survive a deflationary environment. Read More »

17. Which Will Cause the Coming Depression? Inflation or Deflation?

The coming economic collapse (Depression) is inevitable but the route taken to this ending is uncertain. The road has parallel routes, either a deflationary collapse or a hyperinflationary collapse. Which route is taken depends upon government so, which will it be? Words: 1350 Read More »

18. Will the Current Whiff of Deflation Bring 2008 All Over Again?

You don’t need [actual] deflation—a reduction in the outstanding supply of money—to have markets react to a decrease in the rate of money supply growth…, anticipate the eventual deflation [and begin to price it into the market. Remember 2008?] Oil prices fell from $147 in July of 2008 to $33 per barrel by early 2009. The S&P 500 went into free-fall starting in September of 2008 and bottomed out in March of 2009—falling almost 50% in six months. This is what has already happened to the gold mining sector but, remember, central banks may be on a counterfeiting holiday right now but they have a history of taking very short vacations. Read More »

19. It is VERY Important to Know Where the Inflation-Delation Pendulum Is to Invest Correctly – Do You?

Global investors are now being violently whipsawed by the decisions of central banks, as they switch between inflationary and deflationary policies. The choice governments now face is to allow a deflationary depression to finally purge the worldwide economy of its imbalances, or try to levitate real estate, equity and bond prices by printing massive quantities of their currencies. Read More »

20. Interest Rates NOT Rising Any Time Soon – Even With Fed Tapering. Here’s Why

Everyone and their mom is expecting long-term interest rates to rise now that the Fed is tapering its bond buying programs. I have a couple of problems with this line of thinking because, although it seems like reducing demand for a security (i.e. tapering QE) would result in a drop in price, when you really think about how quantitative easing works this makes no sense and, secondly, the market is telling us this makes no sense. Let me explain. Read More »

TIPS (Treasury Inflation Protected Securities) are telling us that inflation is expected to be low for as far as the eye can see, and the economy is expected to be weak for some time to come. This article provides an understanding of what TIPS are, how they work and what they are currently saying. Read More »

22. Deflationary Pressures In Economy Are Primary Concern of the Fed

Despite the Fed’s recent communications that they are planning to “taper” the current monetary program by the end of this year – the index is suggesting that their interventions, in one form or another, are unlikely to end anytime soon. The threat of “deflation” remains the Fed’s primary concern. Read More »

Are we headed for rampant inflation or crippling deflation? I believe that we will see both. The next major financial panic will cause a substantial deflationary wave first, and after that we will see unprecedented inflation as the central bankers and our politicians respond to the financial crisis. [Let me explain why I think that will unfold.] Words: 1025 Charts: 3 Read More »

Share
Previous The Best Stock Market Indicator – Ever (+3K Views)
Next The Average Home “Owner” Is Totally Out of Touch With Reality! Here’s Why (+2K Views)