economic activity, the pace at which money circulates through our system slows down. That is why what is happening in the U.S. right now is so troubling. Let me explain.

The above are edited excerpts from an article* by Michael Snyder (theeconomiccollapseblog.com) entitled The Velocity Of Money In The U.S. Falls To An All-Time Record Low.

When an economy is healthy, there is lots of buying and selling and money tends to move around quite rapidly.  Unfortunately, the U.S. economy is the exact opposite of that right now.  In fact, as I will document below, the velocity of M2 has fallen to an all-time record low.

On a very basic level, the amount of economic activity that we are witnessing is not anywhere near where it should be and the flow of money through our economy is very stagnant…

…M1 is a fairly narrow definition of the money supply…[and is defined by] Investopedia as: 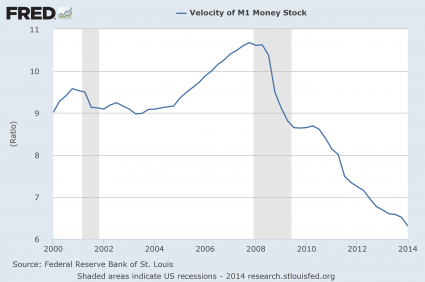 M2 includes more things in the money supply …[and is defined by] Investopedia as: 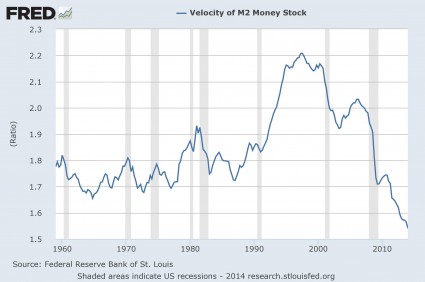 This is a highly deflationary chart. It clearly indicates that economic activity in the U.S. has been steadily slowing down and, if we are honest, we have to admit that we are seeing signs of this all around us:

Never before has such a high percentage of men in their prime years been so idle. Of course, if we were actually using honest numbers, the unemployment rate would be in the double digits, our economy would be considered to have been in a recession since about 2005, and everyone would be crying out for an end to “the depression”.

…The folks at the Fed know that the U.S. economy would probably drift into a deflationary depression if they just sat back and did nothing so they flooded the system with money in a desperate attempt to revive economic activity. Instead, though, most of the new money just ended up in the pockets of the very wealthy and further increased the divide between those at the top and those at the bottom in this country.

Fed officials are now slowly scaling back quantitative easing because they apparently believe that the economy is getting “back to normal”….Many are not quite so optimistic. The chief market analyst at the Lindsey Group, Peter Boockvar, for example, believes that the S&P 500 could plummet 15 to 20 percent when quantitative easing finally ends. Others believe that it will be much worse than that.

Since 2008, the size of the Fed balance sheet has grown from less than a trillion dollars to more than four trillion dollars.  This unprecedented intervention was able to successfully delay the coming deflationary depression, but it has also made our long-term problems far worse so, when the inevitable crash does arrive, it will be much, much worse than it could have been.

I believe that the inflation and price charts paint a clear picture, and that until inflation in the world picks up significantly, there will be no meaningful rallies in precious metals…[While] I am bullish on gold and silver long term, the short-term pressure is still evident and might take them lower in the next couple of months. END_OF_DOCUMENT_TOKEN_TO_BE_REPLACED

2. Tips from TIPS on Prospects for Growth, Outlook for Inflation & Future for Gold

TIPS are telling us that the market is quite pessimistic about the prospects for real growth, but not concerned at all about the outlook for inflation. END_OF_DOCUMENT_TOKEN_TO_BE_REPLACED

At the end of last year virtually every every single economist expected interest rates to rise this year as the Fed tapered their purchases and the economy improved but, in fact, interest rates on the 10 year U.S. Treasury have been going down year to date (from 3% to 2.5% after rising from about 1.6% to 3% last year). The masses, going along with this crowd, got fooled but we have been calling for a decline in interest rates for some time now due to world-wide deflation and it couldn’t be clearer to us that this is the most likely scenario for the United States. Let us explain. END_OF_DOCUMENT_TOKEN_TO_BE_REPLACED

When velocity is low the nation essentially winds up in a “liquidity trap” which is a situation where monetary policy is unable to stimulate the economy either through lowering interest rates or increasing the money supply. This was the condition that Japan found itself enveloped in from 1989 to present. We expect the same problem in this country and hope (really hope) to be wrong. Words: 672 Read More »

Are we headed for rampant inflation or crippling deflation? I believe that we will see both. The next major financial panic will cause a substantial deflationary wave first, and after that we will see unprecedented inflation as the central bankers and our politicians respond to the financial crisis. [Let me explain why I think that will unfold.] Words: 1025 Charts: 3 END_OF_DOCUMENT_TOKEN_TO_BE_REPLACED

It is difficult to say exactly when hyperinflation will hit a currency. However, I am convinced that the danger level is so high for most fiat money that it is worthwhile for everyone to increase their understanding of hyperinflation. This is the first part of a Hyperinflation FAQ for frequently asked questions or objections about hyperinflation. Words: 1600 END_OF_DOCUMENT_TOKEN_TO_BE_REPLACED

7. Now Underway: A Spiral of Debt Deflation Into a Bottomless Economic Abyss!

von Mises once said, “There is no means of avoiding the final collapse of a boom brought about by credit expansion. The alternative is only whether the crisis should come sooner as the result of a voluntary abandonment of further credit expansion, or later, as a final and total catastrophe of the currency involved” and just that is happening before our very eyes. Words: 2242 END_OF_DOCUMENT_TOKEN_TO_BE_REPLACED

8. Risk for the Economy is Deflation, NOT Inflation

Presently, the federal government is increasing spending that in the end may actually retard economic activity, and is also proposing tax increases that will further restrain private sector growth. In other words, fiscal policy is executing a program that is 180 degrees opposite from what it should be to stimulate the economy. How is it possible to get an inflationary cocktail out of deflationary ingredients? Words: 1461 END_OF_DOCUMENT_TOKEN_TO_BE_REPLACED

9. Deflationary Pressures In Economy Are Primary Concern of the Fed

Despite the Fed’s recent communications that they are planning to “taper” the current monetary program by the end of this year – the index is suggesting that their interventions, in one form or another, are unlikely to end anytime soon. The threat of “deflation” remains the Fed’s primary concern. END_OF_DOCUMENT_TOKEN_TO_BE_REPLACED

10. Deflation: What You Need to Know (and Fear) & How to Prepare for Such an Eventuality

All in all, deflation should be one of the most serious words in a commodity investor’s vocabulary and is something to always keep an eye on. While its presence may seem removed from our economy, the possibility always remains and preparation will be key to survive a deflationary environment. END_OF_DOCUMENT_TOKEN_TO_BE_REPLACED