While the monetary policies in the United States, Japan and Europe are accommodative to a large extent, these

policies are not having the desired effect on inflation. I expect the long-term impact on inflation will be quite positive but the short-term deflation worries are more than enough to weigh on the prices of gold and silver. Deflationary pressure might prevail in the short-term and will probably give us a chance to buy precious metals at lower levels.

The above are edited excerpts from an article by ONeil Trader as posted on SeekingAlpha.com under the title Gold And Silver: More Short-Term Pain?

As the charts below show, inflation in the most of the developed world has been subdued in the last two years.

Gold and silver are on their way to test their 12-month lows in the next couple of weeks.

The rallies following the lows have taken gold and silver prices to a lower level than before, which is also bearish for the precious metals, as it shows the buyers are not able to take the price higher. 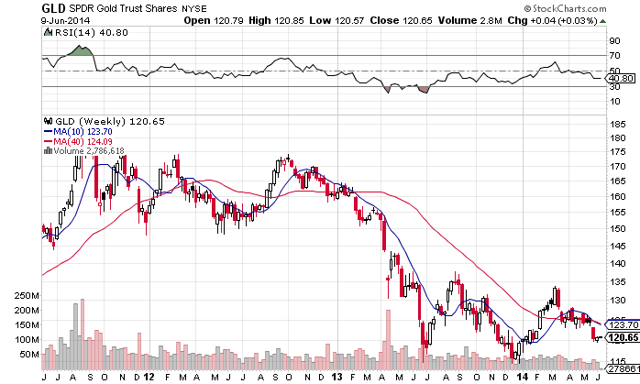 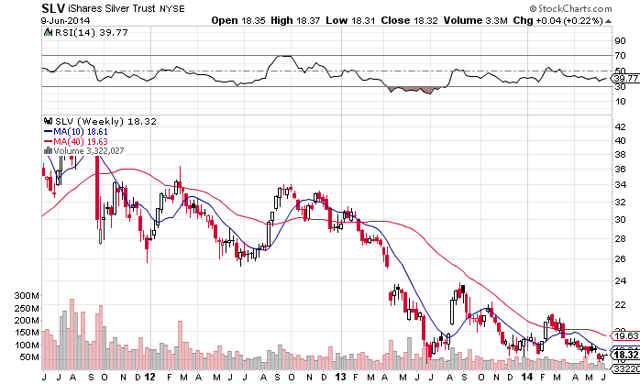 I believe that the inflation and price charts paint a clear picture, and that until inflation in the world picks up significantly, there will be no meaningful rallies in precious metals…[While] I am bullish on gold and silver long term, the short-term pressure is still evident and might take them lower in the next couple of months.

At the end of last year virtually every every single economist expected interest rates to rise this year as the Fed tapered their purchases and the economy improved but, in fact, interest rates on the 10 year U.S. Treasury have been going down year to date (from 3% to 2.5% after rising from about 1.6% to 3% last year). The masses, going along with this crowd, got fooled but we have been calling for a decline in interest rates for some time now due to world-wide deflation and it couldn’t be clearer to us that this is the most likely scenario for the United States. Let us explain. END_OF_DOCUMENT_TOKEN_TO_BE_REPLACED

2. Inflation: What You Need to Know

The March year-over-year inflation rate was 1.51%, which is well below the 3.88% average since the end of the Second World War and 37% below its 10-year moving average. END_OF_DOCUMENT_TOKEN_TO_BE_REPLACED

3. These 5 Events Will Lead to Higher Gold & Silver Prices

It is my contention that the move in precious metals…[from] late 2008 through 2011 was largely a result of the expansion in central bank balance sheets and the perceived threat of runaway inflation. Since 2011, [however,] we’ve seen economic growth improve and inflation rates across the globe subside. As a result, investment banks and market strategists are arguing against owning gold, and making the case that, with a lack of inflation and an improved economy, the need for owning gold as an insurance hedge against inflation and currency debasement is no longer present. I strongly disagree. END_OF_DOCUMENT_TOKEN_TO_BE_REPLACED

4. Is There a Direct Link Between Rising Inflation and a Rising Demand For Gold?

History clearly shows there is a direct link between inflation and gold demand. When inflation jumps, or even when inflation expectations rise, investors turn to gold in greater numbers. When gold demand rises, so does its price and you can guess what happens to gold stocks. Below is a look at the extent of consumer purchases after inflation (and in some cases hyperinflation) took off in a number of countries. END_OF_DOCUMENT_TOKEN_TO_BE_REPLACED

With gold’s current setup, we’ve finally reached a significant cycle pivot…and I believe that we are likely to be treated to a very surprising turn of events. Directly ahead, I believe, is a major turn and rally for gold. END_OF_DOCUMENT_TOKEN_TO_BE_REPLACED

6. Present Gold Price Is No Surprise & It Likely Will Decline Even Further – Here’s Why

Much has been written over the years about gold going up dramatically in price to $5,000, $10,000 and even higher yet here we sit at $1,250 or so. Surprised? You shouldn’t be. Below are articles outlining why the decline is underway and what to expect as a bottom price. END_OF_DOCUMENT_TOKEN_TO_BE_REPLACED

7. The Future Price of Gold and the 2% Factor

It is my contention that the price of gold rallies whenever the U.S. dollar’s real short-term interest rate is below 2%, falls whenever the real short rate is above 2%, and holds steady at the equilibrium rate of 2%. Let me explain. END_OF_DOCUMENT_TOKEN_TO_BE_REPLACED

Share
Previous Should You Replace Your Financial Advisor With A “Robo” Advisor? Here Are the Pros & Cons (+2K Views)
Next The Pain Is Probably Not Over For Silver Bulls! Here’s Why

The REAL Reasons Behind the Current U.S. Inflation Problem