Are we headed for rampant inflation or crippling deflation? I believe that we will see

both.  The next major financial panic will cause a substantial deflationary wave first, and after that we will see unprecedented inflation as the central bankers and our politicians respond to the financial crisis. [Let me explain why I think that will unfold.] Words: 1025  Charts: 3

So writes Michael (http://theeconomiccollapseblog.com) in edited excerpts from his original article* entitled Will It Be Inflation Or Deflation? The Answer May Surprise You.

The following article is presented by  Lorimer Wilson, editor of  www.munKNEE.com  and the FREE Market Intelligence Report newsletter (sample here) and may have been edited ([ ]), abridged (…) and/or reformatted (some sub-titles and bold/italics emphases) for the sake of clarity and brevity to ensure a fast and easy read. This paragraph must be included in any article re-posting to avoid copyright infringement.

Michael goes on to say in further edited excerpts:

This is a subject that is hotly debated by economists all over the country.

So what is the truth?  Well, for the reasons listed below, I believe that we will see both.  The next major financial panic will cause a substantial deflationary wave first, and after that we will see unprecedented inflation as the central bankers and our politicians respond to the financial crisis.  This will happen so quickly that many will get “financial whiplash” as they try to figure out what to do with their money.  We are moving toward a time of extreme financial instability, and different strategies will be called for at different times.

Why We Will See Deflation First

The following are some of the major deflationary forces that are affecting our economy right now:

1. The Velocity Of Money

The rate at which money circulates in our economy is the lowest that it has been in more than 50 years.  It has been steadily falling since the late 1990s, and this is a clear sign that economic activity is slowing down.  The shaded areas in the chart [below] represent recessions, and as you can see, the velocity of money always slows down during a recession…Even though the government is telling us that we are not in a recession right now, the velocity of money continues to drop like a rock.  This is one of the factors that is putting a tremendous amount of deflationary pressure on our economy. 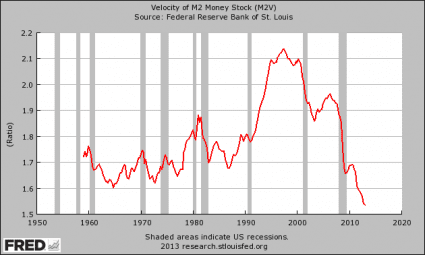 [Every]…single month, far more money leaves this country than comes into it.  In fact, the amount going out exceeds the amount coming in by about half a trillion dollars each year.  This is extremely deflationary.  Our system is constantly bleeding cash, and this is one of the reasons why the federal government has felt a need to run such huge budget deficits and why the Federal Reserve has felt a need to print so much money.  They are trying to pump money back into a system that is constantly bleeding massive amounts of cash…

The trade deficit is one of our biggest economic problems, and yet most Americans do not even understand what it is.  As you can see below, our trade deficit really started getting bad in the late 1990s. 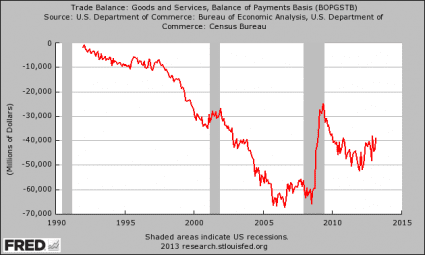 3. Wages And Salaries As A Percentage Of GDP

One of the primary drivers of inflation is consumer spending but consumers cannot spend money if they do not have it and, right now, wages and salaries as a percentage of GDP are near a record low [as can be seen in the chart below].  This is a very deflationary state of affairs.  The percentage of low paying jobs in the U.S. economy continues to increase, and we have witnessed an explosion in the ranks of the “working poor” in recent years.  For consumer prices to rise significantly, more money is going to have to get into the hands of average American consumers first… 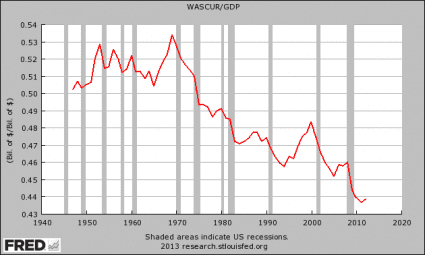 Right now, we are living in the greatest debt bubble in the history of the world.  When a debt bubble bursts, fear and panic typically cause the flow of money and the flow of credit to really tighten up.  We saw that happen at the beginning of the Great Depression of the 1930s, we saw that happen back in 2008, and we will see it happen again.  Deleveraging is deflationary by nature, and it can cause economic activity to grind to a standstill very rapidly.

The Next Wave of the Economic Collapse – Deflation

During the next major wave of the economic collapse, there will be times when it will seem like hardly anyone has any money.

Some of the financial elite seem to be positioning themselves for what is coming.  For example, even though he has been making public statements about how great stocks are right now, the truth is that Warren Buffett is currently sitting on $49 billion in cash.  That is the most that he has ever had sitting in cash. Does he know something?

The Wave After That – Inflation

Of course there will be a tremendous amount of pressure on the U.S. government and the Federal Reserve to do something once a financial crash happens.  The response by the federal government and the Federal Reserve will likely be extremely inflationary as they try to resuscitate the system.  It will probably be far more dramatic than anything we have seen so far. Cash will not be king for long.  In fact, eventually cash will be trash.

The actions of the U.S. government and the Federal Reserve in response to the coming financial crisis will greatly upset much of the rest of the world and cause the death of the U.S. dollar – and that is why gold, silver and other hard assets are going to be so good to have in the long-term.  In the short-term they will experience wild swings in price, but if you can handle the ride you will be smiling in the end.

In the coming years, we are going to experience both inflation and deflation, and neither one will be pleasant at all. Get prepared while you still can, because time is running out.

1. Hyperinflation: 21 Countries Have Experienced It In Last 25 Years – Is the U.S. Next!

2.  These 5 Events Will Lead to Higher Gold & Silver Prices

It is my contention that the move in precious metals…[from] late 2008 through 2011 was largely a result of the expansion in central bank balance sheets and the perceived threat of runaway inflation. Since 2011, [however,] we’ve seen economic growth improve and inflation rates across the globe subside. As a result, investment banks and market strategists are arguing against owning gold, and making the case that, with a lack of inflation and an improved economy, the need for owning gold as an insurance hedge against inflation and currency debasement is no longer present. I strongly disagree. Read More »
3. James Turk Interviews Robert Prechter: Which Will It Be – Hyperinflation or Massive Deflation?
James Turk believes hyperinflation is ahead. Bob Prechter believes massive deflation is coming. An interesting discussion between the two takes place in this audio. Ultimately, both lead to Depression. Only the route taken differs, but that is important.4. A Hypothetical Look At What Could Possibly Be In Store for the U.S.The economic condition of the country continues to decline toward its rendezvous with an, as yet, unknowable catastrophe. As economic and political matters become more desperate, so will what the government considers acceptable. If a debt default cannot be engineered via continuous inflation, it will occur via a direct repudiation of obligations or a quasi-surreptitious one like the hypothetical one presented in this article…a look (not a prediction) at a series of not improbable events that could develop [and which] would change our economic world overnight. Viewed from this perspective, I don’t think such a move or something approximating it is out of the question. Words: 1300 Read More »
Share
Previous Don’t Get Greedy! The Greedometer Gauge Has a 100% Track Record – Here’s Its Most Recent S&P 500 Forecast (+3K Views)
Next Canadians: Watch Out for Fake $100 Bills! Here’s How (+2K Views)