So says Marvin Bolt (www.alphaplus-advisors.com/) in an article* which Lorimer Wilson, editor of

www.munKNEE.com , has further edited ([  ]), abridged (…) and reformatted below  for the sake of clarity and brevity to ensure a fast and easy read. Please note that this paragraph must be included in any article re-posting to avoid copyright infringement. Bolt goes on to say:

[On the basis]…that financial markets are useful forecasting tools our analysis identified a variety of unique indicators with a statistically significant history of signaling future inflation based on a 1-3 year outlook. Considering the performance of:

we conclude that inflation should surpass 4% in the next 12 months and 6% within three years.

INTRODUCTION
…Governments are a necessary component of the global financial ecosystem, standing ready to intervene on an infrequent but recurring basis,…[and] in the recent crisis central banks around the world took unprecedented actions to stabilize the global financial system [as the graph below shows]. 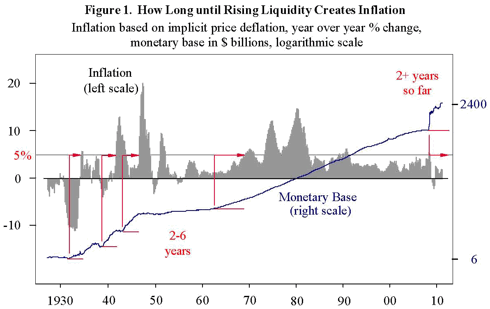 As shown in Figure 1, the financial crisis of 2008 caused the Federal Reserve to inject enormous amounts of liquidity into the financial system leading to a surge in the monetary base. Excess reserves held by commercial banks, plus currency in circulation, are the most liquid forms of money and make up the monetary base. Bank lending combined with consumer & business spending are the mechanisms that circulate this base money – sometimes referred to as “high powered” money – throughout the economy. In a normal economic environment, growth in the monetary base eventually stimulates the economy. If high-powered money is the juice, then the banks are the straw that stirs the drink. The Fed has the ability to directly control excess reserves in the banking system, which presently accounts for approximately 60% of the monetary base, and therefore has the ability to stimulate growth in base money…

In the examples shown in Figure 1, a rapid rise in base money led to inflation over 5% within 2-6 years. The current round of stimulus started in the middle of 2008, almost 3 years ago, so if there is to be an inflationary impact from the Fed’s activities, it should arrive soon. What does the future hold? Let’s search for some clues.
3 Market-Based Inflation Indicators

The approach of this study was to survey a wide range of market statistics in search of correlations between market-based indicators and future inflation. The idea is that markets themselves are often the best leading indicators. For example, do rising gold prices really forecast future inflation, as many investors believe? If so, by how far in advance? We considered many statistics including each sector of the S&P 500 Index, such as financial, energy or technology stocks. We considered a variety of fixed income products, such as corporate and high-yield bonds. We also tested various commodities, including gold, for correlations with future inflation. Our search resulted in an inflation forecast for three different timeframes using five distinct indicators:

1 a) Small-cap Outperformance vs. Future Inflation
The shares of small companies tend to fare better than large company stocks during periods of above-average inflation [because,]when all prices are rising, it is easier for everyone to pass along price increases.

An explanation [of the above] might be found in the profile of a typical small company versus its larger counterpart. On average, a small company could be expected to have less ability to differentiate its products or services. It would typically be domestic, with modest profit margins, and little negotiating leverage in its business model. For example, a small company might be a supplier to a large multinational corporation. A period of rising prices could help ease the pressure on small-company profit margins by helping to nullify its poor negotiating position with suppliers and customers. [On the other hand, while] a large company will often have a strong competitive position in its industry which is how it grew to be large in the first place, rising input costs from raw materials or labor can hurt profit margins. In general, a period of rising prices would help neutralize the disadvantages of being small, while reducing the benefits that come from economies-of-scale or proprietary products found at large companies.

[As seen in Table 1 below,] data since 1955 show that outperformance of small-cap stocks is a leading indicator of inflation and shows the strongest correlation exists when m=13 quarters. 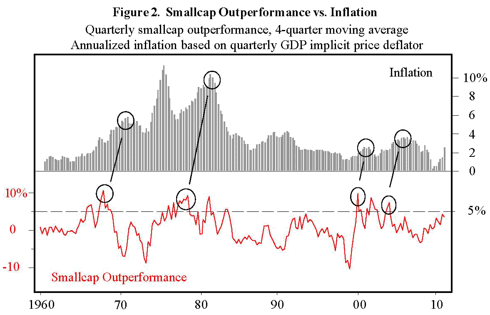 In Figure 2 [ab0ve] we see that small-cap outperformance above 5% has indeed led to rising inflation. Such a comparison helps identify and contrast the relative peaks and pivotal turning points in both data sets, however it does not clearly show the relationship for other data not at the extreme readings. For this purpose, consider the series of charts shown in Figure 3. 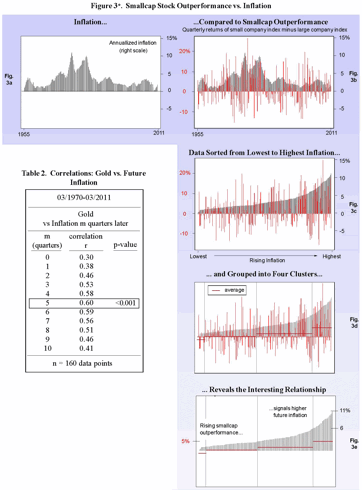 By overlaying each data set, re-sorting the data from lowest to highest inflation, and focusing on the four clusters of small cap outperformance as indicated in Figure 3d, we have a better understanding of the relationship. Specifically: a positive correlation exists across the entire range of inflation, but is strongest for the extreme inflation readings between 6% and 11%.

As shown in Figure 3e, the critical level for small cap outperformance that forecasts the highest future inflation is approximately 5%. Historically, readings above 5% have most often led to inflation between 6- 11%. However, Figure 2 shows that the prevailing level at the time should also be considered in making a forecast. The generally high levels of inflation during the ‘70s and ‘80s naturally led to the highest peak readings. At the same time, the low inflation environment since 2000 led to lower peak readings for inflation. Looking at the data from all angles helps refine the forecast. Figure 2 shows that the current measure of small cap outperformance has risen to just under the critical 5% dividing line. We conclude from this indicator that:
If small cap outperformance surpasses 5%, then inflation 3 years later will most likely be closer to 6%, and not the 11% extreme.
1 b) Large-cap Performance vs. Rising Inflation
In contrast to the unique and little-known relationship between rising inflation and small-cap stocks, consider another relationship: inflation vs. large company stock performance [as illustrated in Figure 4 below]. 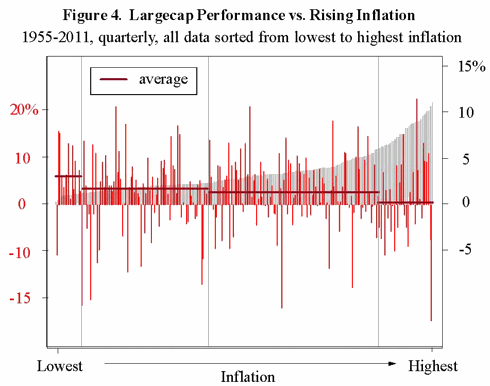 Figure 4 illustrates the well-known history that inflation is bad for the stock market. Based on data since 1955, this analysis demonstrates that rising inflation typically leads to a steady deterioration of large-cap equity performance, albeit with weak statistical significance (p=0.23). Furthermore, when inflation surpasses 5%, the average quarterly returns of large company stocks is near zero, as shown in Figure 4. The addition of this data set to our overall analysis suggests a curious cycle:

When small cap outperformance grows large enough to forecast inflation above 5% after 3 years, it also is a sign that the returns from large company stocks will deteriorate to nil within 3 years.

Table 2 [above] shows that the strongest correlation between the year-over-year performance of gold and future inflation exists after 5 quarters… [and that] there is less than a 1% chance that it is due to coincidence. An overlay of the raw data, sorted from low to high inflation, is shown in Figure 5. Notice the relationship is substantially stronger for rapidly rising gold prices and the corresponding highest levels of inflation. 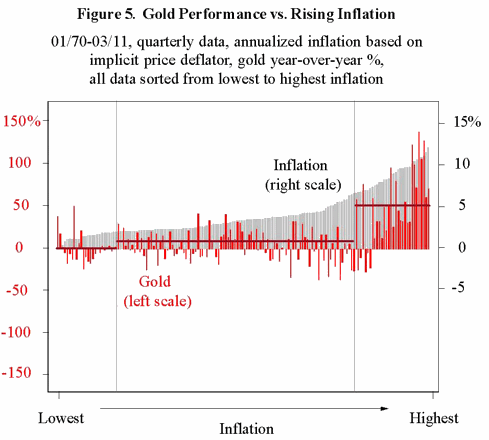 A comparison of the two data series, as shown in Figure 6 [below], provides more insight. Here, we see the critical value for gold performance is approximately 30%.

If gold price appreciation exceeds 30% versus year-ago levels, then a forecast for above-average inflation is appropriate. Interestingly, the current reading is also just below the critical level — similar to the current signal from the small cap outperformance indicator. Our conclusion is that any further acceleration in the gold rally will signal inflation above 4% after 5 quarters. 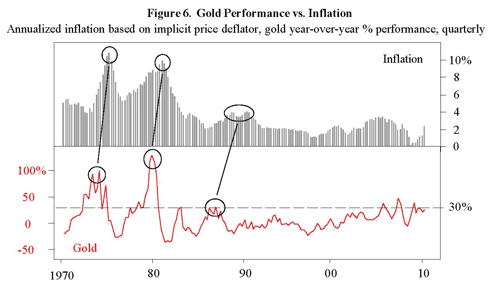 Our third approach bases the outlook for inflation on the performance of three different market statistics:

In order to develop a more robust composite indicator, a multifactor model was created by multiplying the market-based indicators with a fixed weighting and adding all three together. Each indicators was selected independently for its ability to forecast future inflation. Table 3 [below] shows the correlation histories. A forecast period (m) of 8 months is where the largest average correlation exists for all three indicators. 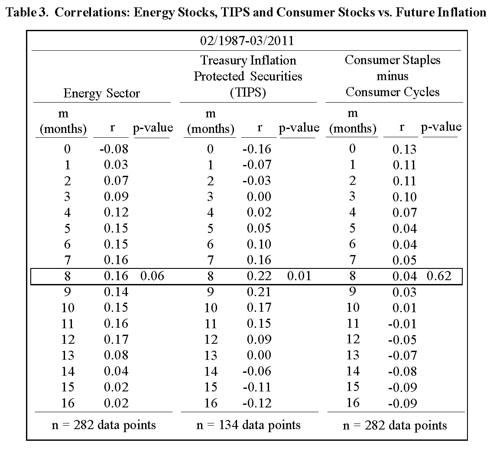 The weightings were optimized to provide the best fit to the past data, resulting in the following model: Inflation indicator = 3 x TIPS + 2 x XLE + 1 x (XLP – XLY)

Figure 7 [below] shows the history of each statistic compared with inflation since 2000. A few observations: Energy stocks and TIPS each show the ability to anticipate inflation, while the input based on consumer stocks appears to be more of a coincident indicator. In addition, the magnitude of the changes in the consumer stocks indicator appears to balance the other two in a way such that the composite model (Figure 7d) is useful from two perspectives:

As shown in Figure 7d [below], the composite model is presently near the high end of its range since 2000, which translates into:

an inflation forecast of approximately 4% within 8 months.

1. TIPS: As seen in Figure 7c, TIPS have historically shown a strong correlation with future inflation (p=0.01 with 8 months lead time). However, the recent performance of TIPS has been modest, which suggest a possible investment opportunity. If, in the future, other indicators discussed herein (smallcap outperformance, gold, and the multifactor model) give strong signals of future inflation, while TIPS still lags in performance, then treasury-indexed bonds could represent an attractive investment.

2. Consumer stocks: Strong signs of future inflation will suggest that investors should be prepared to buy consumer staples and, at the same time, sell short consumer cyclicals. The timing of the trade should be just prior to the anticipated arrival of inflation based on the various indicators profiled in this study. 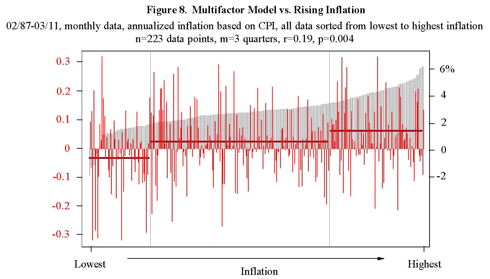 Figure 8 [above] shows the readings for the multifactor model vs inflation 8 months later for all months since 1987. We see that the correlation between the model’s signals and future inflation is consistent across the entire spectrum. When the model’s readings are at or below zero, inflation has been low, while the higher readings correlate with stronger inflation. Furthermore, the relationship is highly significant with a p-value of 0.004.

Table 4 [below] provides a recap of each specific indicator used in the entire analysis. Our attempt has been to describe the approach with as much clarity and description as possible, so the reader can recreate the analysis if desired. A more practical suggestion is to simply monitor each indicator on a regular basis, while focusing on the background descriptions provided herein. For example: 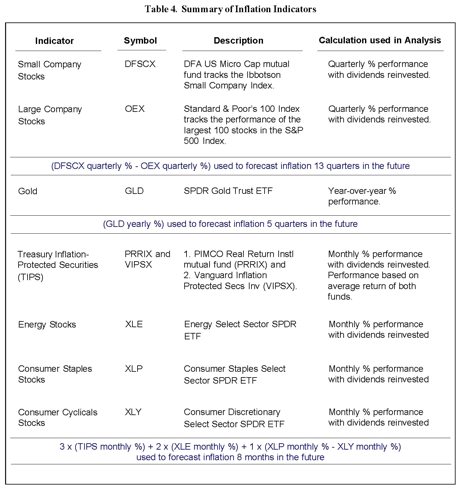 Considering all inputs as of the end of March, 2011, our overall outlook is for inflation to rise to 4% within one year, and 6% within three years.

We note, however, that the indicators will fluctuate on a daily basis as they are derived from trading activity in financial markets. As a result, this forecast only reflects a snapshot in time. The reader is encouraged to monitor the indicators in real-time for an up-to-date outlook.

Links to other related articles:

Share
Previous Gold is Not an Investment – Gold is Money – and Here’s Why (+2K Views)
Next What Decline? U.S Economy Holding Up Exceptionally Well! (+2K Views)