The Truth About ‘Investing’ in Gold

So says Nick Barisheff (www.bmgbullion.com) in an article* which Lorimer Wilson, editor of

www.munKNEE.com , has further edited ([  ]), abridged (…) and reformatted below  for the sake of clarity and brevity to ensure a fast and easy read. Please note that this paragraph must be included in any article re-posting to avoid copyright infringement. Barisheff goes on to say:

While many people believe gold is an archaic relic that has no role in today’s sophisticated, computerized, paper-based monetary system, three facts contradict this popular misconception:

The Difference Between Owning an Investment and Owning Gold

The definition of “investment” is the commitment of money or capital to purchase financial instruments or other assets in order to gain profitable returns in the form of interest, income or appreciation of the value of the investment. Through this transfer of capital, in the expectation of a profit, an investor gives up capital and puts it at risk. The investor receives a return in dividends or interest as compensation because capital is at risk; investors may get back less than they invested, or they may get back nothing at all.

Physical gold bullion or physical paper currencies locked in a vault, on the other hand, are not invested; they are simply being stored. Since neither is invested, they don’t earn interest or dividends – but they don’t have any counterparty risk. The major difference between gold and currencies kept in a vault, however, is that gold’s purchasing power increases while paper currencies lose purchasing power year after year.

Both gold and currencies can be taken out of the vault with ease, and the proceeds invested by giving them to someone else in return for dividends or interest. An interesting perspective can be gained by calculating whether the proposed investment is likely to return more gold ounces than were originally invested. For example, the 44 ounces of gold required to purchase the Dow in 2000 has now dwindled to fewer than nine ounces. [You] might as well have left the gold in the vault! Since gold maintains and even increases in purchasing power, there is no need to put it at risk in order to earn a minimal amount of interest or dividends.

Gold’s Purchasing Power Over the Years

Figure 1 illustrates how gold has not only preserved but also increased its purchasing power from 1971, when the gold standard was abandoned, to 2011.

Figure 2 illustrates how all of the major currencies have declined over the last decade when measured by gold ounces. 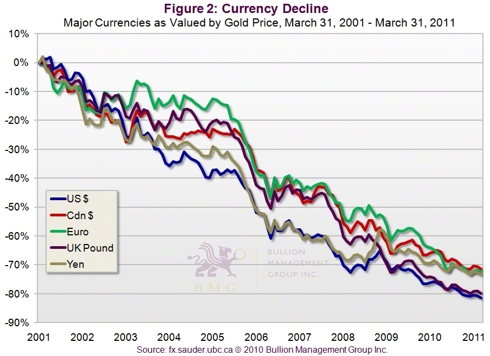 It is crucial to recognize that physical gold bullion, held directly or on an allocated and insured basis in a vault, is not an investment because it is not someone else’s promise of performance or someone else’s liability, and as a result has no counterparty risk. All other forms of gold ownership are, in fact, investments. Paper gold certificates, unallocated bullion accounts, ETFs, shares in gold mining companies and futures contracts all have counterparty risk, and are either someone else’s promise of performance or liability. They may have their place in a portfolio, but they are all investments.

Share
Previous These Signs Suggest Global Economy at a 'Tipping Point'!
Next These Indicators Say Inflation to Go to 4% Soon – and 6% by 2014 (+3K Views)