The Bullish Case for the U.S. Economy

[A look below at the trend in the U.S.’s share] of world GDP (data here) from 1969 to 2010… [shows an] amazingly stable share of world output which has remained [constant at 26.3%] for more than forty years…[and] is a testament to how America’s dynamism, resiliency, and culture of innovation and entrepreneurship have enabled us to be productive in a tough world. [Let me expand on this further.] Words: 730

So says Mark J. Perry (http://mjperry.blogspot.com/) in an article*which Lorimer Wilson, editor of

www.munKNEE.com , has further edited ([  ]), abridged (…) and reformatted below  for the sake of clarity and brevity to ensure a fast and easy read. Please note that this paragraph must be included in any article re-posting to avoid copyright infringement. Perry goes on to say: 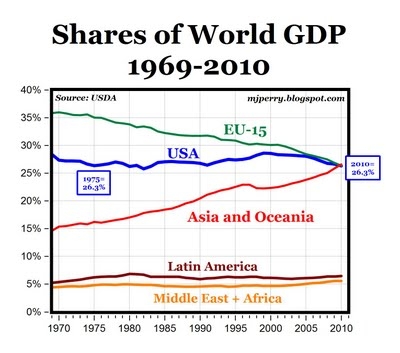 As Robert Doll, Wall Street’s perma-optimist and chief equity strategist for BlackRock pointed out in a recent WSJ interview:

You could say we’re the best house in a bad neighborhood. We have fewer problems and more solutions than Europe or Japan. Over the next 20 years, the U.S. work force is going to grow by 11%, Europe’s workforce is going to fall by 5% and Japan’s is going to fall by 17%. This alone tells me the U.S. has a huge advantage over Europe and a bigger one over Japan for growth and the reason for this is pretty simple: we have higher immigration than both Europe and Japan, and… we have a higher fertility rate…[which] are the long-term determinants of population growth and, therefore, work force growth.

Can we really win merely by staying ahead of Europe and Japan? So far, the answer seems to be yes. How is this possible given the rapid rise of China and India? Mr. Doll says the increase in emerging markets’ share of the world economy has come at the expense of mostly Japan and a bit [of] Europe. The U.S. has held its own, which I think is a statement of our ability to be productive in a tough world. Even with all our problems I think the entrepreneurial spirit is alive and well in the U.S.

Doll argues that we are still the source of technological innovation and home to the greatest universities and the most creative businesses. He sees promising advances in health care and alternative energy technologies. By alternative he doesn’t necessarily mean “green” energy, but simply new power sources given that he expects oil prices to keep rising.

The fact that America’s share of world GDP has remained constant over time is a testament to how America’s dynamism, resiliency, and culture of innovation and entrepreneurship have enabled us to be “productive in a tough world.” In contrast, the EU-15’s declining share of the world economy demonstrates the failure of anti-growth, European-style socialism with high taxes and excessive regulations that creates a culture of dependency and entitlement.