Here’s What Historically Happens to Stocks When Bull Markets End

…Is the bull market about to come to an end? If last year ends up being the

top of this bull market, what does history say could happen to stocks this year?

The original article by Jeff Clark has been edited here for length (…) and clarity ([ ]) by munKNEE.com to provide a fast & easy read. 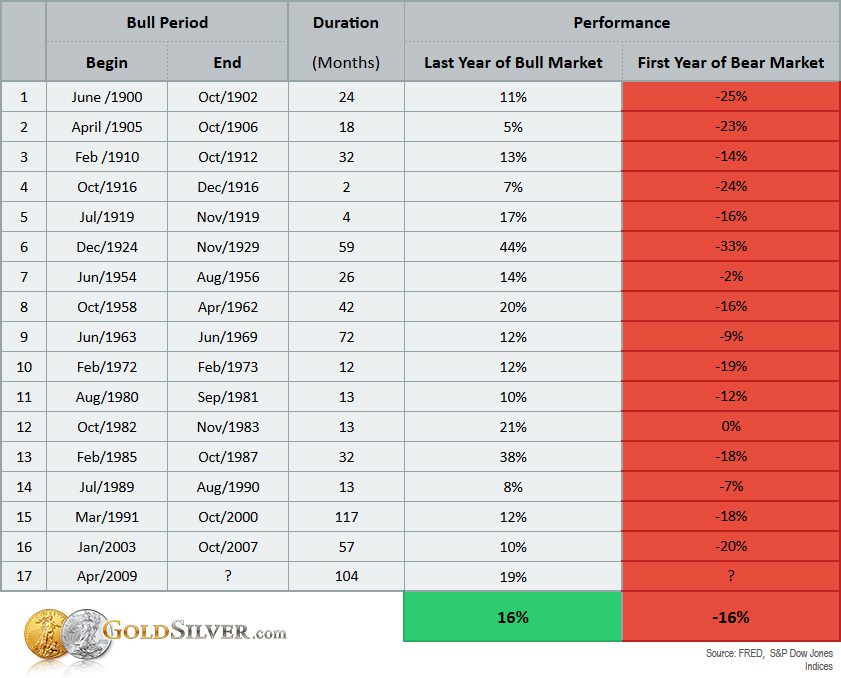 While the declines for the first year of the bear market varied greatly, you can see that on average, the S&P lost 16% the year immediately following the last year of the bull market. Also notice that in only four cases was the decline measured in single digits—all others were double digit losses.

Since this is the second longest bull market in history the decline could well be higher than the historical average and what is gold likely to do in that environment? We’ve shown before that gold has acted as a buffer—and gained ground—in most of the biggest stock market crashes.

The bottom line for us is that we think a major shift is coming, not just in overpriced stock and bond and real estate markets, but in the currencies that have been abused by many central bankers the world over. Once the process gets underway, the mainstream will turn back to mankind’s oldest form of money in mass, and our patience and forethought will pay off.

1. Will Similarities Between Trump & Kennedy Rallies Continue & Conclude In A Market “Slide” In Early 2018?

Comparing the Trump and Kennedy rallies—as in the first chart below—I expect Trump’s market to build an even bigger slide.

2. Recent Stock Market Returns Are Not Excessive Relative To History? Here’s Why

US stock market valuations appear stretched, but history reminds us that this form of excess can endure and, with the U.S. economy posting ongoing signs of growth, the market’s upbeat profile of late has macro support. Nonetheless, it’s prudent to consider how performance stacks up in terms of history.

3. These Indicators Suggest We Could Be On the Precipice Of A Major Move to the Downside

As the next crisis erupts, the mainstream media is going to respond with shock and horror but the only real surprise is that this ridiculous bubble lasted for as long as it did. The truth is that a market decline is way overdue.

4. Stock Market: “A Day Of Reckoning Is Coming” Say These Insiders

5. U.S. Stock Market Has Entered the Final Stage of a Super-Charged Tulip Mania

6. Harry Dent: Mark My Words: “The Bubble May Well Be Peaking!”

If wealth preservation investors get out of their stocks and buy silver, they are likely to avoid the most massive wealth destruction in the next few years. Let me explain.

9. A Stock Market Correction – Not A Crash – Is Most Likely – Here’s Why

If the markets crash in 2018 then, like previous crashes, they will prove to be a buying opportunity but, until the masses embrace this bull market, however, the most likely outcome is a correction and not crash.

John Hussman believes the markets are so overvalued now that we can expect a 60% decline from here…[and in his original article he] presents a total of seven charts to make a compelling case.