Get Ready To Experience A 2008-Like Crash – Here’s Why

threatened Congress with [a] stock crash if Congress doesn’t pass a tax reform Bill. His reason is that the stock market surge since the election was based on the hopes of a big tax cut.

This article is an edited ([ ]) and revised (…) version of the original written by Dave Kranzler to ensure a faster & easier read. It may be re-posted as long as it includes a hyperlink back to this revised version to avoid copyright infringement.

This reminds me of 2008, when then-Treasury Secretary, ex-Goldman Sachs CEO, Henry Paulson, and Fed Chairman, Ben Bernanke, paraded in front of Congress and threatened a complete systemic collapse if Congress didn’t authorize an $800 billion bailout of the biggest banks.

The U.S. financial system is experiencing an asset “bubble” that is unprecedented in history. This is a bubble that has been fueled by an unprecedented amount of Central Bank money printing and credit creation.

As you are well aware, the Fed printed more than $4 trillion dollars of currency that was used to buy Treasury bonds and mortgage securities but it has also enabled an unprecedented amount of credit creation. This credit availability has further fueled the rampant inflation in asset prices – specifically stocks, bonds and housing, the price of which now exceeds the levels seen in 2008 right before the great financial crisis.

However, you might not be aware that Central Banks outside of the U.S. continue printing money that is being used to buy stocks and risky bonds. 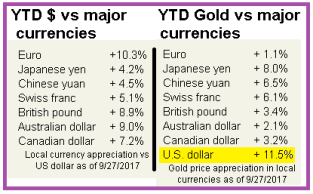 As you can see from the right side of the table, gold is also up YTD vs every major currency. Note that gold has appreciated the most vs. the U.S. dollar. 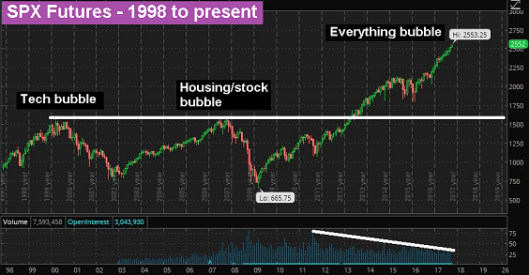 It Is Different This Time

Stock investors and house-flippers in the U.S. now make investment decisions based on the premise that, no matter what fundamental development or new event occurs, the market will always go up. “It’s different this time” has crept back into the rationale. The markets are particularly dangerous now. The concept of “risk” has been completely removed from investment equation.

…Economic laws tells us that increasing the supply of “good” without a corresponding increase in demand for that good results in a falling price. This is why interest rates are near zero. The Fed and the Government have increased the supply of currency via printing and issuing credit. Investors , in turn, are taking that near-zero cost of currency and credit and throwing it recklessly in all assets, but specifically stocks and homes.

Currently, anyone who puts their money into the stock, bond and housing markets in search of making money is doing nothing other than gambling recklessly on the certainty of the outcome of two highly inter-related events:

…One would have to be brain-dead to not acknowledge that global Central Bank money-printing has caused the current “everything” asset bubble but it’s a “fear of missing out” that has driven investors to pile blindly into stocks with zero regard for fundamental value. Even pensions funds, according to someone I know who works at a pension fund, have pushed equity allocations to the limit.

For the most part, Central Banks are now posturing as if they are going to stop printing money and, in some cases, “shrink” the size of their balance sheet (i.e. reverse “quantitative easing”).

Share
Previous 2 Gold Stocks Trading Below Book Value That Appear to Be Screaming Buys
Next Harry Dent: Mark My Words: “The Bubble May Well Be Peaking!” (+2K Views)