Stock Market: “A Day Of Reckoning Is Coming” Say These Insiders

price/earnings ratio, the so-called CAPE, to assess whether stocks are likely to be over- or under-valued…and it is now down to 3.4%. The only times it has been lower were in 1929 and between 1997 and 2001…and we know now what happened then. Is it going to be any different this time?

The original article, written by Michael Snyder, is presented here by munKNEE.com – “ The internet’s most unique site for financial articles! (Here’s why)” – in an edited ([ ]) and revised (…) format to provide a fast & easy read. Visit our Facebook page for all the latest – and best -financial articles!

Since the market bottomed out in early 2009, the S&P 500 has been on a historic run. If this rally had been based on a booming economy that would be one thing, but the truth is that the U.S. economy has not seen 3% yearly growth since the middle of the Bush administration… 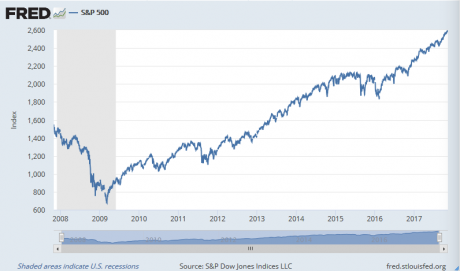 A Day Of Reckoning Is Coming

This bubble has lasted for much longer than it ever should have, and everyone understands that a day of reckoning is coming. When it finally happens, millions upon millions of ordinary Americans will be completely shocked, but most insiders know that the other shoe is going to drop at some point. For example,

It isn’t going to take much to set off an unstoppable chain of events. Our financial markets are even more vulnerable than they were in 2008, and the right trigger could unleash a crisis unlike anything we have ever seen in modern American history.

Unfortunately, most Americans keep getting fooled by the artificial boom and bust cycles that the central banks create.  Right now most people seem to have been lulled into a false sense of security, and they truly believe that everything is going to be okay but every time before when the market has looked like this, a crash has always followed, and this time will be no exception.

Stock prices cannot stay completely disconnected from economic reality forever, and once the bubble bursts the pain is going to be unlike anything that we have ever seen before.

Share
Previous 4 Copper Stocks Trading at a Discount to Future Cash Flows
Next Are These 4 Canadian Gold Stocks Too Cheap to Ignore?