A lock-step relationship has existed between gold and U.S. debt for most

of U.S. history. If the U.S. debt continues to increase at the same rate as the last ten years, then it will reach $26 trillion by 2020.  This is a good indicator for a gold price of at least $2,500 per ounce in the near future.

[The original article, as written by Nick Barisheff (bmgbullion.com), is presented here by the editorial team of

The monetary policy of low interest rates…on the part of the world’s central banks have caused bubbles in stocks, bonds, real estate, art, and exotic cars. These are not likely to continue higher in 2016, and the risk of a major correction looms…

While it is clear that the global economy is contracting and there are numerous vulnerabilities, several valuation methodologies summarize current market fundamentals and provide an excellent indicator of future trends. They are the Buffet Indicator, the Shiller PE Ratio, and the Tobin Q Ratio. 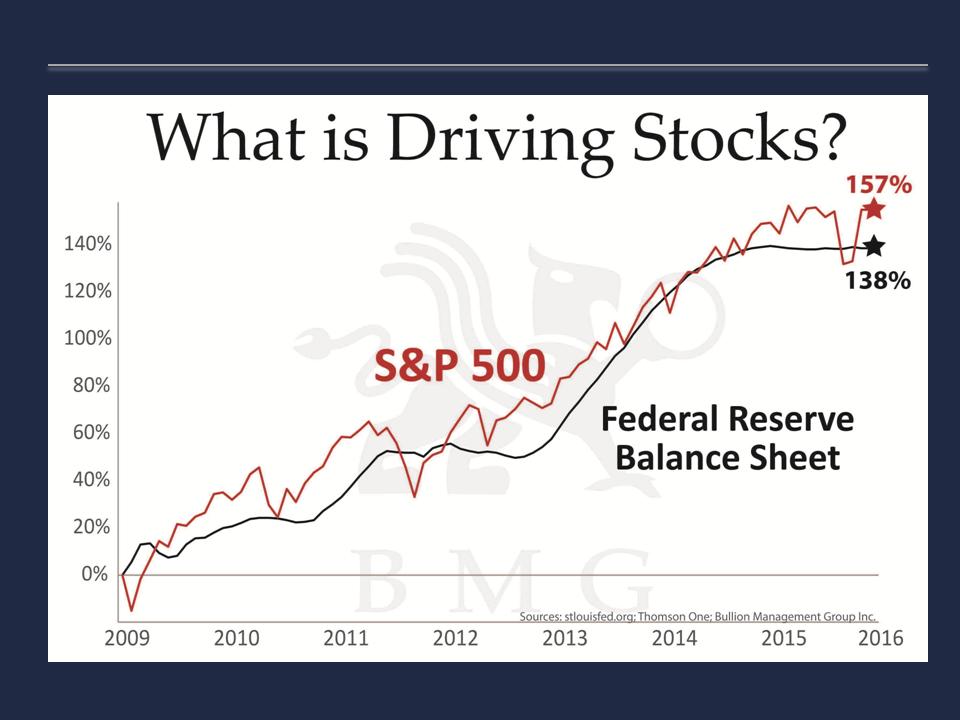 The Buffett Indicator uses the total market capitalization of U.S. equities divided by GDP. The only other times the Buffett ratio exceeded 100% (it’s currently 123.4%) was just prior to the tech crash in 2000, and the credit bubble in 2008. 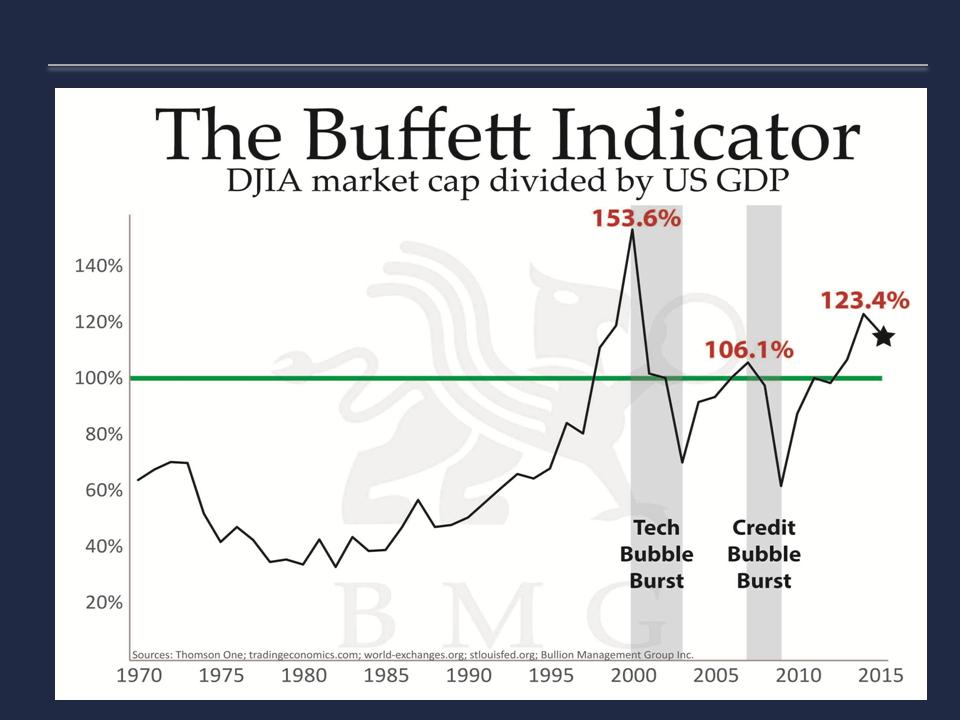 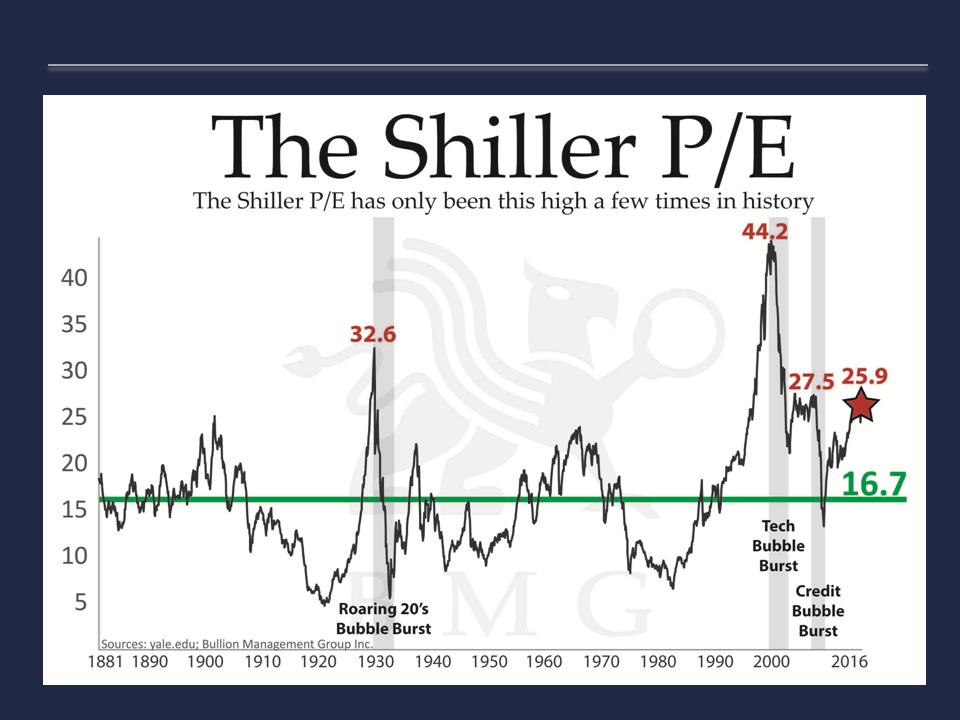 The Tobin Q ratio, which measures market value versus replacement cost, is considered one of the better long-term indicators of a pending market decline. The current Tobin Q ratio exceeds the 70-year average of 0.7 by 58%. The ratio rose above the average in 2000 and 2008. 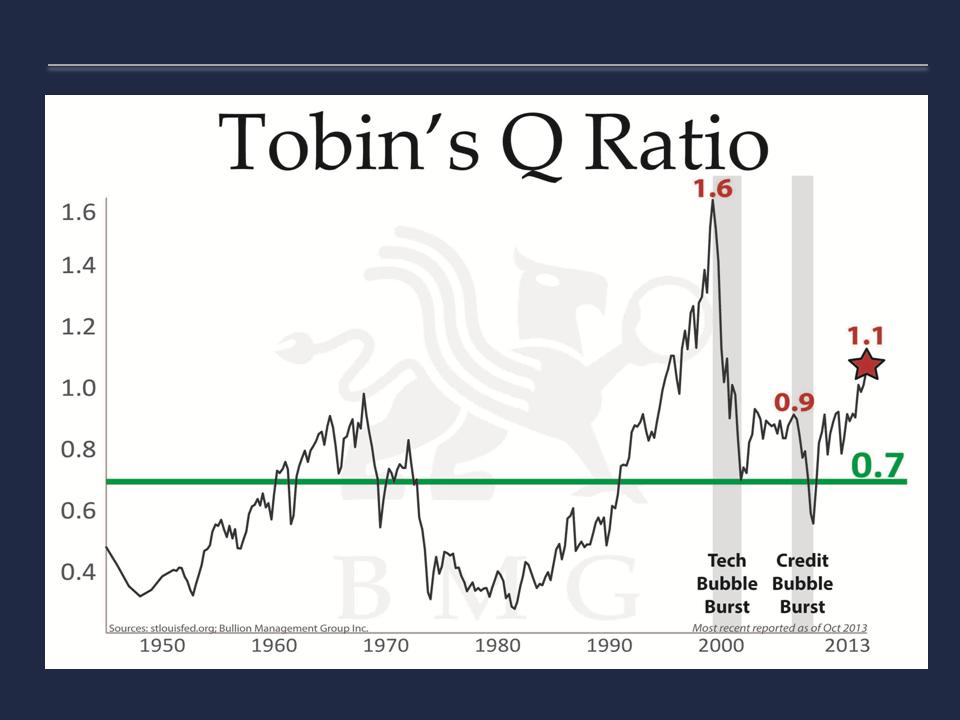 This time, however, the correction could be much worse than in either 2000 or 2008. Not only do we have a significant overvaluation, but historically high margin debt which will accelerate the decline due to margin calls. These conditions provide investors with the opportunity to sell high and take a profit. 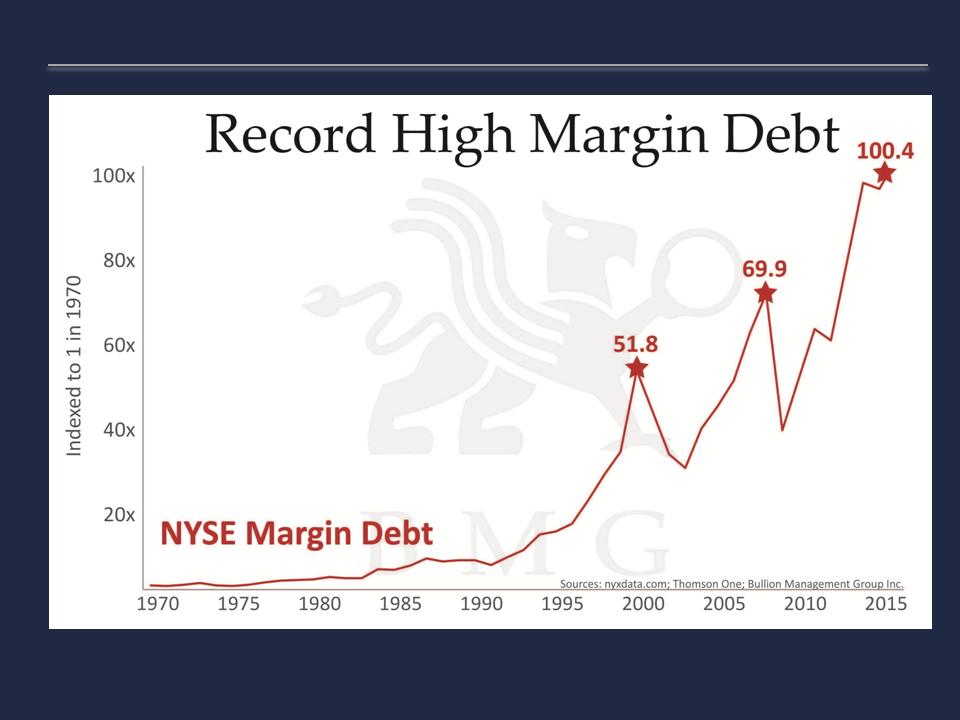 The future outlook for gold pricing is not complete without understanding the implications that China will have. China has been increasing its gold reserves, and has made a number of strategic moves that threaten the U.S. dollar’s reserve currency status.

In 2015, the result of these changes was already showing, as 71% of U.S. Treasuries were purchased by the Federal Reserve with newly issued currency as demand for U.S. dollars decreased.

Finally, to reinforce the “Buy Low” opportunity, a comparison to the cyclical gold correction from 1974 to 1976 and the subsequent price rise serves as a good example. At that time, after a 445% rise from 1971 gold declined 45%, gold sentiment was at record lows, and the media was full of negative gold commentary, as it is today. 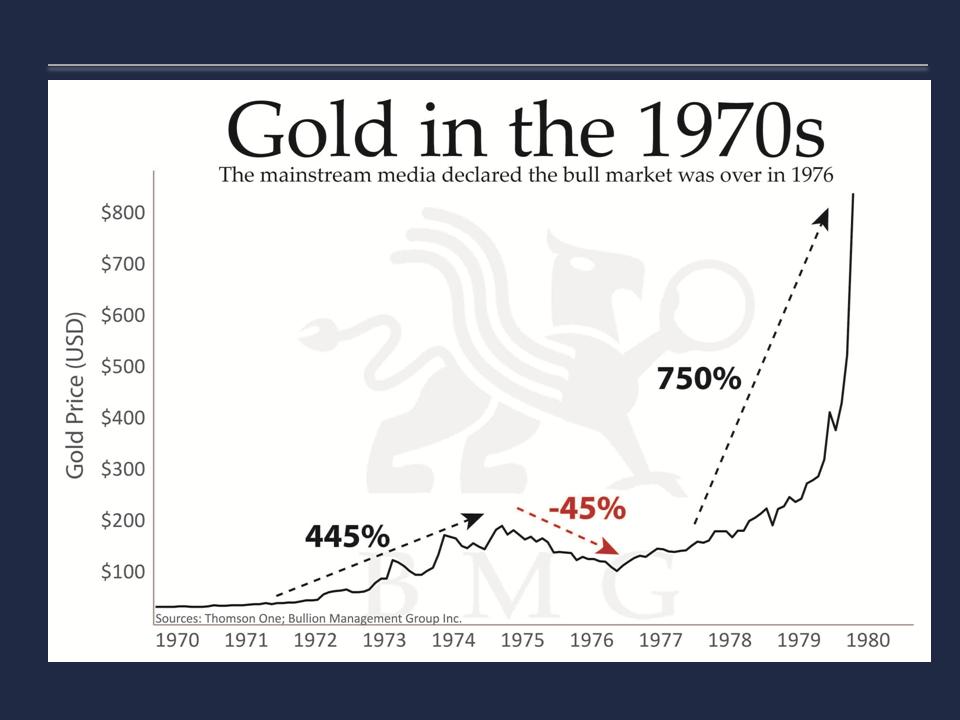 After two years of declines, many investors sold their gold holdings and vowed never to invest in gold again. However, in the fall of 1976, gold began an ascent that saw it rise 750%, peaking at $850 a troy ounce three years and four months later. After a 3-year correction, the same opportunity to buy low exists today, just as it did in 1976. Of course, conditions were different then: the stock market was not in a bubble, and total U.S. debt was $800 billion – less than last year’s annual deficit.

(Incidentally,] I am often asked how high will the price of gold go, and do I still think it will hit $10,000 per troy ounce, as described in my book. The conditions detailed in my book are still very much in place, and many of the vulnerabilities have actually increased. To order your copy of “$10,000 Gold: Why Gold’s Inevitable Rise Is the Investor’s Safe Haven” please visit:  Amazon.com, Amazon.ca, Chapters.Indigo.ca or [email protected])

A lock-step relationship has existed between gold and U.S. debt for most of U.S. history. If the U.S. debt continues to increase at the same rate as the last ten years, then it will reach $26 trillion by 2020.  This is a good indicator for a gold price of at least $2,500 per ounce in the near future. 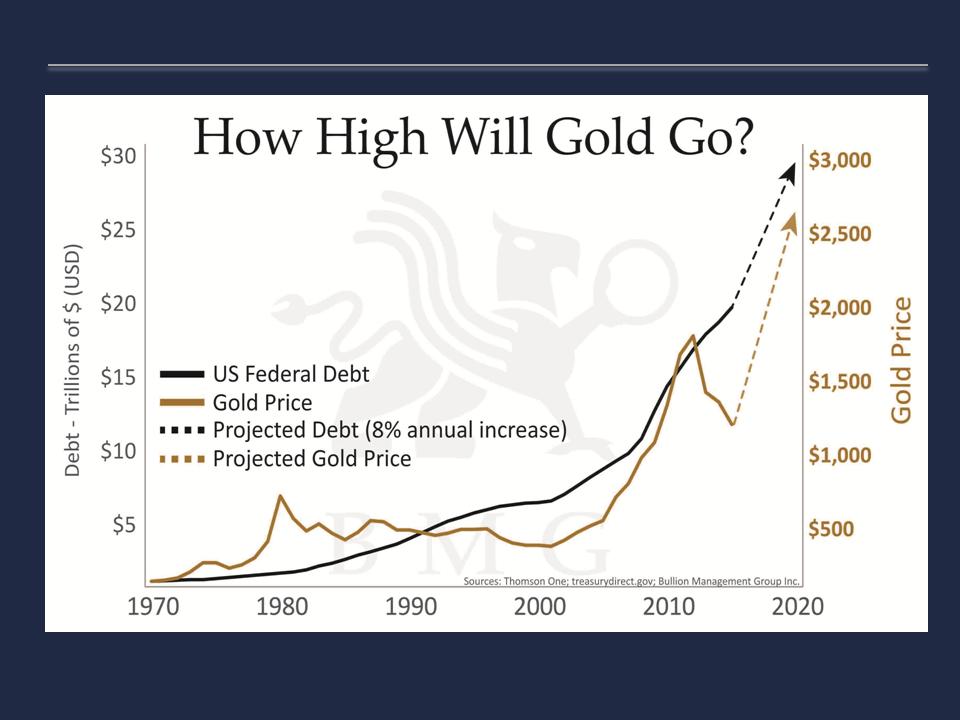 2. Nick Barisheff: Gold Could Easily Double in Price – Here’s Why

Barisheff thinks the gold price could be “easily double” right now because he believes that, “What’s kept the price down is the artificial leased gold going onto the markets.”

The consequences of the total economic mismanagement by world governments and central banks for the last hundred years will eventually result in my forecast of $10,000 gold and $500 silver being fulfilled.

Batten down the hatches, because a “perfect storm” is coming to global stock markets in 2016 according to the technical analysis team at UBS.

The top 14 investment banks ALL project that the S&P 500 will go up in 2016 with an average increase of 6.5%…This is understandable. A falling stock market is bad for business and these banks depend and thrive on the bullish excitement and expectations of their clients. However, we at Carden Capital, have adaptive strategies that can handle up and down markets, so we can tell it like it is, and in this case, we are highly confident that the projections of those 14 investment banks are going to be dead wrong. In fact, we are confident that the market will be down in 2016, and will enter into a corrective phase. With that introduction, we present to you the top 10 reasons the stock market will tank in 2016.

7. A Reminder Of What Usually Happens to Stocks When the Fed Raises Rates: Ouch!

I know, I know, no one likes the bearer of bad news — especially when it comes to stock prices – but someone needs to remind you what usually happens to stocks when the Fed raises rates so it might as well be me. They drop. Let me explain.

9. If You Own Stocks Then This Article Is a MUST Read

11. This Ratio Is An Ugly Warning Sign For the Stock Market

12. Will It Be China That Pricks the Stock Market Bubble?

Let’s imagine the stock market as a whole bunch of balloons. One or two can pop loudly and everyone will jump and then laugh it off but, eventually, enough balloons will pop that the weight of the debris overwhelms the remaining balloons’ ability to keep the string aloft. Then your whole bunch falls down. In like manner, some kind of catalyst sets off every market collapse.The last balloon to pop isn’t any bigger or smaller than the others; it just happens to be last. What are some candidates for that last balloon?

Share
Previous Drop In Gold Price No Surprise – Here’s the Inside Scoop (+4K Views)
Next Social Security: 8 Facts You Need To Know