A Reminder Of What Usually Happens to Stocks When the Fed Raises Rates: Ouch! (+3K Views)

I know, I know, no one likes the bearer of bad news — especially when it

comes to stock prices – but someone needs to remind you what usually happens to stocks when the Fed raises rates so it might as well be me. They drop.

If it’s any consolation, I own stocks, but I’m not selling them. Why? Well, it’s a long story, which I tell in detail here, but the short version is that I’m a long-term investor, and I’m a taxable investor. I think stocks will eventually recover…[but] I’m mentally prepared for a 50%+ pullback, and I already have a conservative allocation among stocks, bonds, and cash.

For the past five years, the Fed has been frantically pumping money into the financial markets, keeping interest rates low and encouraging traders to borrow and speculate. This free money, and the resulting speculation, has helped drive stocks to their current levels but now the Fed is starting to “take away the punch bowl,” as Wall Street is fond of saying. Specifically, the Fed is beginning to tighten.

To be sure, for now, monetary policy is still loose and, if you limit your definition of “tightening” to “raising interest rates,” the Fed has only just now begun to tighten. In the past:

Here’s a look at the past 50 years. The blue line is the Fed Funds rate (a proxy for the level of Fed money-pumping). The red line is the S&P 500. We’ll zoom in on specific periods in a moment. Just note that Fed policy goes through “tightening” and “easing” phases, just as stocks go through bull and bear markets and sometimes these phases are correlated. Now let’s zoom in. In many of these periods, you’ll see that sustained Fed tightening has often been followed by a decline in stock prices. Again, not immediately, and not always, but often. You’ll also see that most major declines in stock prices over this period have been preceded by Fed tightening. One of the oldest sayings on Wall Street is, “Don’t fight the Fed.” This saying has meaning in both directions, when the Fed is easing and when it is tightening. A glance at these charts shows why.

On the positive side, the Fed’s tightening phases have often lasted a year or two before stock prices peaked and began to drop so, even if you’re convinced that sustained Fed tightening is now likely to lead to a sharp stock-price pullback at some point, the bull market might still have a ways to run. 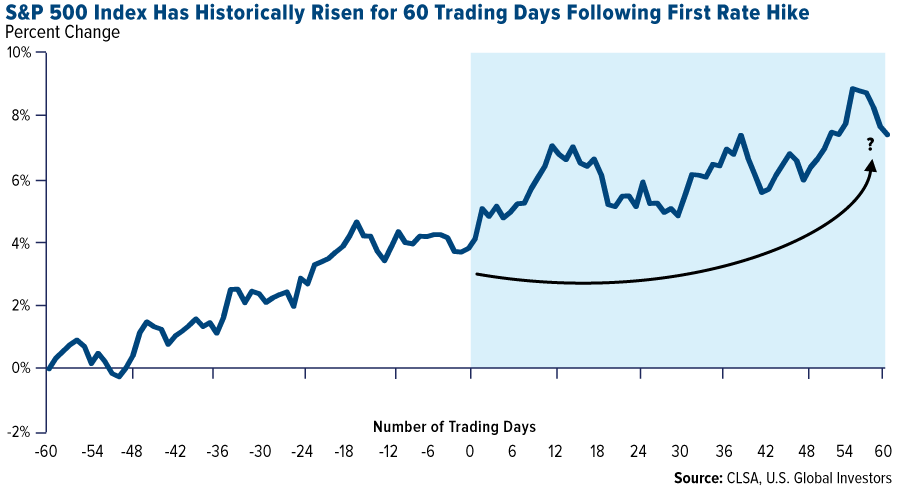 
[The original article was written by Henry Blodget (businessinsider.com) and is presented above by the editorial team of munKNEE.com (Your Key to Making Money!) and the FREE Market Intelligence Report newsletter (see sample here – sign up in top right corner) in a slightly edited ([ ]) and abridged (…) format to provide a fast and easy read.]

3. If You Own Stocks Then This Article Is a MUST Read

4. US Dollar Rally Will Signal A Stock Market Crash – Here’s Why

The global carry trade (meaning money borrowed in US Dollars and invested in other assets) stands at over $9 TRILLION (larger than the economy of France and Brazil combined) but, given the U.S. dollar rally combined with the Fed’s hint at raising rates in December, it is at risk of blowing up. Here’s why.

5. This Ratio Is An Ugly Warning Sign For the Stock Market