The global carry trade (meaning money borrowed in US Dollars and

invested in other assets) stands at over $9 TRILLION (larger than the economy of France and Brazil combined) but, given the U.S. dollar rally combined with the Fed’s hint at raising rates in December, it is at risk of blowing up. Here’s why.

When the Fed cut interest rates in 2008, it flooded the system with U.S. dollars. Simply put, the U.S. Government was practically giving money away and the world took notice, borrowing dollars at a record pace.

This worked while the US Dollar was holding steady but in the summer of last year (2014), the US Dollar began to breakout of a multi-year wedge pattern as shown in the graph below [the $USD closed last Friday (Nov. 13th) at 99.10: 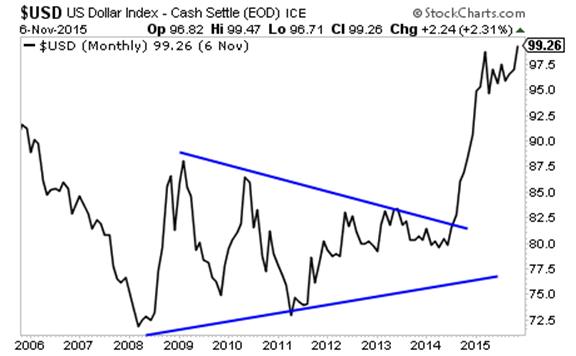 When the US Dollar began to rally aggressively, the global US Dollar carry trade began to blow up – and it is not coincidental that oil commodities, and emerging market stocks took a dive almost immediately after this process began…This process is not over, not by a long shot. As anyone who invested during the Peso crisis or Asian crisis can tell you, when carry trades blow up, the volatility can be EXTREME.

Indeed, the US Dollar as broken out of a MASSIVE falling wedge pattern that predicts a multi-year bull market. 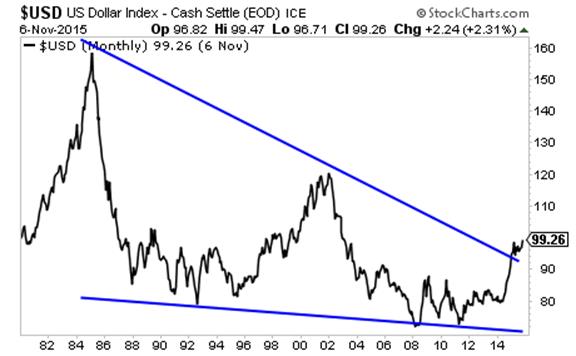 The market drop in August triggered by China devaluing the Yuan (another victim of the US Dollar bull market) was just the start.

Once the US Dollar rally really begins picking up steam, we could very well see a crash.

[The original article* as written by Graham Summers (phoenixcapitalmarketing.com) is presented above by the editorial team of munKNEE.com (Your Key to Making Money!) and the FREE Market Intelligence Report newsletter (see sample here) in a slightly edited ([ ]) and abridged (…) format to provide a fast and easy read.]