2016 with an average increase of 6.5%…This is understandable. A falling stock market is bad for business and these banks depend and thrive on the bullish excitement and expectations of their clients. However, we at Carden Capital, have adaptive strategies that can handle up and down markets, so we can tell it like it is, and in this case, we are highly confident that the projections of those 14 investment banks are going to be dead wrong. [In fact,] we are confident that the market will be down in 2016, and will enter into a corrective phase. With that introduction, we present to you the top 10 reasons the stock market will tank in 2016.

1. The stock market has gone up for the last 7 years in a row. Incorporating dividends into performance statistics, the market was up 1.4% this year, which means 2009 – 2015 were all up years. We analyzed historical market data going back to 1871 and found there was only one instance where the market went up for more years in a row, and that was 8 years in 1982 – 1989. In fact, the current seven year run stands alone. Most bull markets die out after four or five years. It would be rare indeed, for this bull to charge forward any longer, we think this bull will turn bear in 2016.

2. Valuations are too high. If one looks at Professor Robert Shiller’s ten year cyclically adjusted price earnings ratio below, we have reached the level (25x earnings) where it generally stops increasing. This means, according to the Nobel laureate, the only thing that can keep the market trajectory higher is earnings growth. 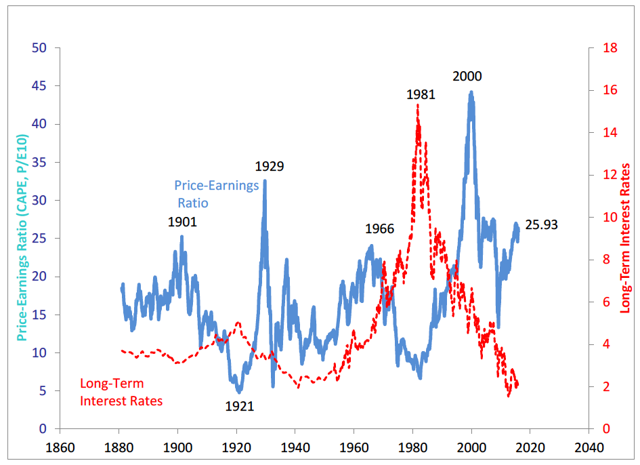 3. However, earnings are not growing. Global growth is slowing. China is slowing. In Q2 and Q3 S&P 500 earnings were down slightly year-over-year and for Q4 expectations are even worse. Some predict that 2016 will mark a return to earnings growth for the S&P 500. We do not see it. Earnings are cyclical. After a prolonged period of earnings growth corresponding with a bull market, you end up at a point where there are peak margins, as is presently the case, and low or negative growth. That is when the market turns — margins cannot stay high forever and earnings cannot keep growing.

4. M&A volume is at a record. M&A volume always peaks at the end of a bull market. Companies become overconfident because things have been going well for so long. Additionally, they have plenty of access to capital so they go on a spending spree right at the point when prices are at their highest. The last two record years were 1999 and 2007.

5. Stock buybacks are at a record level. The last time stock buybacks hit a record was in 2007. Just as with M&A, companies typically spend the most on purchasing their own equity at the wrong time when valuations are too high and economics do not justify the action. In 2015, the story has been companies taking advantage of low interest rates, issuing cheap debt in order to finance stock buybacks.

6. The S&P 500 buyback index has been underperforming the S&P 500 since Q3 2015. The buyback index measures the performance of 100 stocks with the highest ratios in the S&P 500. It usually outperforms the index for obvious reasons — more buying than selling in those issues being bought back by companies. Lately it has been under-performing. The last two times this happened were in 2000 and 2007 right at market peaks.

7. Stock market breadth is unusually shallow. The S&P 500 index is a market cap weighted index and in the last year strong performance within the ten largest companies, many of which are technology…have masked broad losses across the market. The S&P 500 equally weighted index was down 4.11% in 2015. The implication here is that if the tech rally stalls, it will drag the market down in a big way. Better said, on an equally weighted basis the market already knows the bullish trend of the last seven years is over.

8. Long term rates are not increasing. When the Fed finally pulled the trigger and raised short-term rates in December, ten-year Treasury bond rates did not move. The yield curve typically goes flat to inverted before a recession. History shows that the bond market is generally a bit smarter than the stock market. The yield curve is a great predictor. Watch this carefully over the first weeks of 2016.

9. Oil is at $37 per barrel. The Saudis just announced budget cuts and tax increases. They will not trim production until they have forced others out of the market, especially U.S. shale, which cannot compete at these low prices. Therefore, we think the story of weak oil will continue and eventually lead to quite a few bankruptcies in 2016. We think this will shake the stock market...If a rebound in the price of oil does not come soon, the price of oil related stocks will have to correct and that correction is likely to be ugly.

10. High Yield is imploding. On December 10, three high yield funds announced they were closing. The high yield market has been in a bubble for a long time due to ultra low interest rates. Again, the bond market sends signals ahead of time to the stock market. The recent weakness in high yield relates to oil and energy, which accounts for about 15% of the junk bond market. Any time there is excessive leverage in the system, contagion risks increase. We think low oil prices will hammer high yield resulting in a lower stock market. To us, this feels eerily similar to July 2007 when the first CMBS funds started to blow up. Most market professionals believed the damage would stay contained within the sub-prime market. The stock market shrugged it off, just as it shrugged off three high yields funds blowing up on December 10, 2015. Where there is smoke there is fire. We see a raging inferno brewing.

In our next post, we will introduce a market-timing tool for investors and traders to follow that will allow market participants to avoid major market declines. It should be a very timely offering and well worth following.

[The original article was written by Andrew Hecht (technomentals.com) and is presented here by the editorial team of munKNEE.com (Your Key to Making Money!) and the FREE Market Intelligence Report newsletter (see sample here) in a slightly edited ([ ]) and abridged (…) format to provide a fast and easy read.]

2. A Reminder Of What Usually Happens to Stocks When the Fed Raises Rates: Ouch!

I know, I know, no one likes the bearer of bad news — especially when it comes to stock prices – but someone needs to remind you what usually happens to stocks when the Fed raises rates so it might as well be me. They drop. Let me explain.

4. If You Own Stocks Then This Article Is a MUST Read

6. This Ratio Is An Ugly Warning Sign For the Stock Market

Huge skyscraper projects have historically coincided with the beginnings of economic downturns. In economics-speak, a record-breaking skyscraper may be a leading indicator of a downturn.

9. Will It Be China That Pricks the Stock Market Bubble?

Let’s imagine the stock market as a whole bunch of balloons. One or two can pop loudly and everyone will jump and then laugh it off but, eventually, enough balloons will pop that the weight of the debris overwhelms the remaining balloons’ ability to keep the string aloft. Then your whole bunch falls down. In like manner, some kind of catalyst sets off every market collapse.The last balloon to pop isn’t any bigger or smaller than the others; it just happens to be last. What are some candidates for that last balloon?

Share
Previous Watch Out! The Dam Will Break Soon & Everyone Will Try to Sell At the Same Time
Next USA PATRIOT Act Remains America’s Most Draconian Legislation Ever (+2K Views)