What’s With the Stock Market? Is Another Crash/Rally/Retest Scenario Unfolding?

Lorimer Wilson September 7, 2015 Comments Off on What’s With the Stock Market? Is Another Crash/Rally/Retest Scenario Unfolding? 2,084 Views

The market’s history often provides clues to its future – we’re big fans of precedent analysis – so now’s a good time to delve into prior, similar instances to see what they led to [and, therefore, what we might expect in the next 2 months].

The above comments, and those below, have been edited by Lorimer Wilson, editor of munKNEE.com (Your Key to Making Money!) and the FREE Market Intelligence Report newsletter (see sample here – register here) for the sake of clarity ([ ]) and brevity (…) to provide a fast and easy read. The contents of this post have been excerpted from an article* by cabot.net originally posted on SeekingAlpha.com under the title Market Meltdown: History Tells Us What To Expect and which can be read in its unabridged format HERE. (This paragraph must be included in any article re-posting to avoid copyright infringement.)

The past 4 market “shocks” (huge declines soon after a market top, with the decline coming within just a couple of weeks) look similar to what’s happened in recent weeks, as follows:

1. The decline in 1987 (see chart below) was much more extreme [than the current one] but we’re interested in the action after that. Measuring the recovery in the days after the crash, we see that: 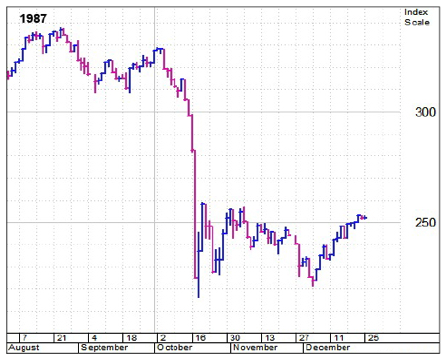 2. In 1998, when the Russian ruble crisis and the implosion of Long Term Capital Management crushed the market in July and August,we see that: 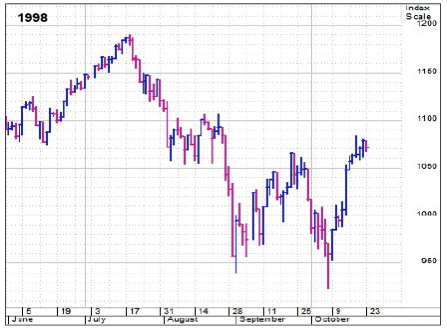 3. In the spring of 2008, which wasn’t the ultimate bottom to that year’s bear market but did lead to a few months of upside…: 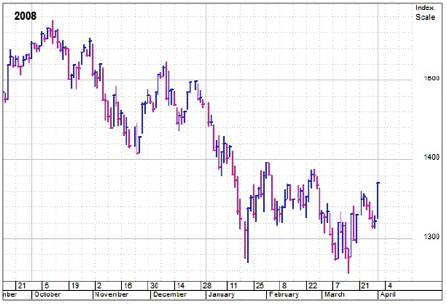 4. In the 2011 plunge, brought on by the first European debt crisis (and U.S. debt ceiling battle)…: 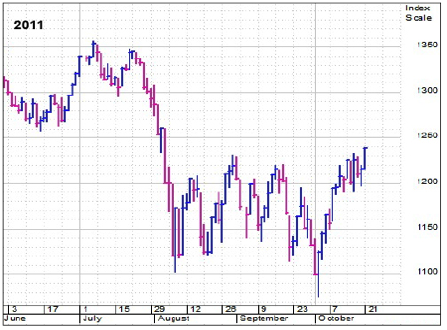 Putting them together, we see that the rebounds from these shocks tend to:

Given the extreme panic readings seen last week (1,336 new lows on Monday, a spike in the VIX above 50) however, and the speed of the decline (45% of the losses in one week), this environment bears a lot of resemblance to the 4 above mentioned “shocks.”

Therefore, if history plays out, stocks will poke higher for another week or two before heading south and retesting last week’s bottom some time in October.

On the very last day of the last two Shemitah years, the stock market crashed so badly that it set a brand new all-time record and now we are in another Shemitah year. It began last fall, and it will end next September. Could it be possible that we will see another historic market crash?

2. The Stock Market Crash Season Is Here & Here’s What the Future Holds

Over the last week, the S&P 500 has been decimated…and decades of financial data suggest that further downside is entirely likely…anywhere from 10-30% is over the next year. Here’s why.

We are now on HIGH ALERT!!!!! Grand Supercycle degree wave (IV)’s decline could start soon. We need to pay close attention and be prepared for a September 2015 event that triggers a stock market crash and economic depression.

5. Trying to Time the Market Is a Fool’s Errand – Here’s Proof

6. Hang In There! Panic Selling Is A Failing Strategy – Here’s Proof

7. Predicting What the Stock Market Will Do Is Impossible – Here’s More Proof

Share
Previous Gold Price Forecasters Always Get It Wrong – Here’s Why (+3K Views)
Next Gold Stocks Are the Cheapest EVER Seen! (+2K Views)