When it comes to market sentiment, gold is at the bottom of the barrel as almost everyone is predicting a complete collapse in the gold price and is falling all over each other to predict the new and lowest price for gold. Why is that so? What does it all mean? Read on!

The above comments, and those below, have been edited for the sake of clarity and brevity to provide a fast and easy read and have been excerpted from an article* by Hebba Investments LLC (hebbainvestments.com) which is posted on SeekingAlpha.com under the title Former Gold Bulls Becoming Bears: Does That Mean Gold Has Reached A Bottom? and which can be read in its unabridged form HERE.

Over the past few weeks we have seen so many articles, predictions, and opinions that are extremely bearish on gold that we must be at an all-time sentiment low just like we were at an all-time high in 2011. Not only are financial journalists calling the market, former gold bulls are now turning bearish. Even Martin Armstrong is calling for $800 gold when only five short years ago he was calling for $5000 gold, ironically enough, by the end of 2016.

Investors’ sentiment is established as a result of investors “voting” on what they want to own directly related to their sentiment towards the investment. Whether they justify it with fancy charts and technicals or creative stories, it is almost always biased towards the pessimism or optimism of the investor.

This is especially true in the gold and currency markets where there is no way to concretely measure cash flows – your purchase is fully based on the expectation for appreciation. Thus, for gold investors, sentiment should play a very central role in determining the future price, which is something that all gold investors should have learned from this downturn.

The reason why sentiment is so important is because it gives an insight into the positioning of other investors. This is the whole “sell on the trumpets and buy when blood is in the streets” concept coined by the Rothschild’s over 100 years ago.

The strategy works simply because by the time sentiment is public and overly pervasive, investors and traders have already positioned themselves accordingly and are simply talking up their books.

Now let us cover some examples of the bearishness that is all over the gold market, and keep in mind many of these people and banks were predicting exactly the opposite a few years ago. Below are the recent forecasts of the major banks sorted in order of bearishness as compiled by Bron Suchecki:

What is interesting is that in 2012 Deutsche Bank, the most pessimistic of the above bunch, was forecasting a 2013 and 2014 gold price of $2000 and $2200 respectively. For those interested, Bron Suchecki has an excellent graph of historic price predictions. 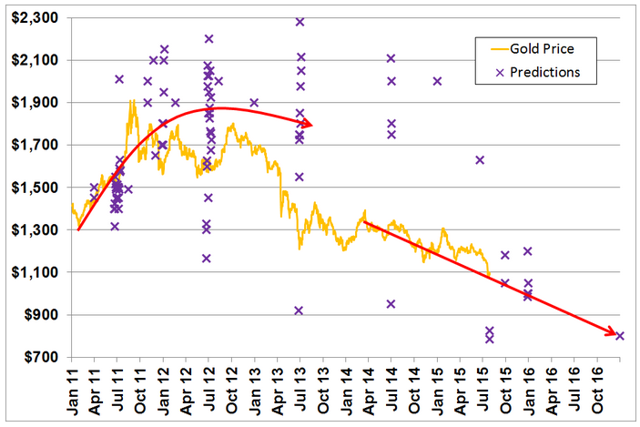 As is obvious, these price predictions seem to pretty much follow the momentum of gold – when the price is rising predictions continue to forecast more of a rise, while during the fall they do just the opposite.

When it comes to market sentiment, gold is at the bottom of the barrel as almost everyone is predicting a complete collapse in the gold price and is falling all over each other to predict the new and lowest price for gold…

What does that mean? Well, the majority of these forecasters calling for lower gold are probably already positioned for it, and the fact that gold interest is rising, suggests that most of these people are not only out of gold, but are shorting gold. It doesn’t mean the gold price cannot fall further as shorts pile on, but at a certain point there will simply be no more fuel for the selling – that’s when you get the bottom and the turnaround…

Gold investors should take some solace in the fact that the same prognosticators calling for the end of gold are the same ones that called for $2000 and $5000 gold when gold was rising – they were dead wrong then and they may be dead wrong now.

Gold has truly become a contrarian trade and we think it’s a no-brainer for long-term investors (i.e. who have horizons greater than one year) to build up positions in:

The next time you read that call for $800 or $500 gold, know that more than likely these same people were calling for $10,000 gold when the price was rising – that is the sentiment game and it is usually better to be on the contrarian end of the trade.

What Mr. Armstrong writes in his articles is done so poorly it is almost always confusing and often virtually incomprehensible but it has a way of providing cover for what he says. A case in point is the inference in an article last week that gold had bottomed, would begin to rise substantially sometime after Oct. 1st and eventually reach $5,000+ sometime during 2016. His latest article disclaims those inferences. Here’s what he now says by way of clarification:

Much has been written over the past few months as to just where gold (and silver) is headed. In light of the recent significant drop in price below is substantiation for such a decline and several projections as to where the price correction will bottom out and the timeframe for such price action.

Several signs have been flashing for the past year that gold has become too big for its britches and will eventually adjust to a lower price which could push the yellow metal off the edge of a cliff to – dare I say – not just below $1100 or $1000 per troy ounce, but to $880ozt.

If gold were to start moving appreciably higher it would damn all paper currencies…and given the current fragile state of the global economic landscape…governments around the world simply cannot, and will not, allow that to happen. They sit on big stocks of gold and, if necessary, they will use those reserves as a tool to crush rallies. I believe, therefore, that gold will soon revert to bear mode trading. My price target remains at the $880 level.

My new analyses of gold & silver indicates they will both continue to show weakness throughout the balance of 2015, plummet to $725ozt. & $12ozt. respectively, during the 1st. Qtr. of 2016 and then go absolutely parabolic in price by the end of 2016/early 2017. Below are the specific details of my forecasts (with charts) to help you reap substantial financial rewards should you wish to avail yourself of my insightful analyses.

The correction in gold is approaching, or is at, its conclusion although gold could drop to $1000 before it’s done. That being said, however, further losses are looking less likely as the dollar has broken down from its parabolic uptrend and is vulnerable to a severe decline. The long-term outlook for gold and silver is a massive parabolic ramp similar to, but much greater in magnitude than that which occurred in the 1970’s, taking gold eventually to $5000 or higher. Silver may prove to be an even better investment. Here’s my explanation with a good number of charts.

“Told you so!” I’m sure that is what the analysts who have projected such a dramatic decline are saying with the recent major correction in the prices of gold and silver. Read why they have come to their conclusions in this catch-all article.

Here are the predictions of all the pundits on record as to how high and how soon (with rationale as to why) gold is expected to go before the bubble bursts.

Optimism, hype, wishful thinking, hope – call it what you will (unabashed cheerleading?) – abounds regarding the future for the price of both gold and silver. Below are just a few such views.

In spite of the fact that gold has rallied from a price of $1,140 last November, my long-term empirical model suggests it is still undervalued and has the potential to rally to $2,000 by late 2015 or 2016 and quite possibly to between $5,000 and $10,000 in six years time. This article explains why that is the case.