Lorimer Wilson August 21, 2015 Comments Off on The Stock Market Crash Season Is Here & Here’s What the Future Holds 2,434 Views

The above comments, and those below, have been edited by Lorimer Wilson, editor of munKNEE.com (Your Key to Making Money!) and the FREE Market Intelligence Report newsletter (see sample here – register here) for the sake of clarity ([ ]) and brevity (…) to provide a fast and easy read. The contents of this post have been excerpted from an article* by Harry Dent (economyandmarkets.com)  originally entitled It’s Finally Happening: The Crash Season Is Upon Us ‏ and which can be read in its unabridged format  HERE. (This paragraph must be included in any article re-posting to avoid copyright infringement.)

It’s finally happening. The crash season is upon us. We’ve seen the early signs this week with leading stocks getting the carpet swept out right from underneath them.

The market has topped and the great crash is in motion. It must be grating on the psyche of any investor who’s dared to stay in stocks this long. 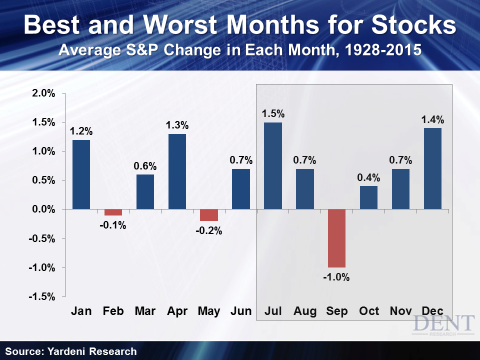 The strongest months are July at a 1.5% average gain, with December, April, and January following in that order. The worst performing months are September, May, and February.

One simple reason stocks get slaughtered in September is taxes. Money managers look at their portfolios and scrap the losers to write those losses off to offset the taxes they’d pay on other gains. This monthly breakdown, however, masks the fact that such annual downturns often start in mid-to-late August and bottom in early-to-mid October. September carries most of the weight, but those months look better than they actually are...

The crash period between mid-August to mid-October tends to be very extreme. 1987 was a classic example of this.

Take a look at the table below. It shows when major corrections have occurred during the crash season. Note the largest string of crashes in the last economic winter season between 1929 and 1932. 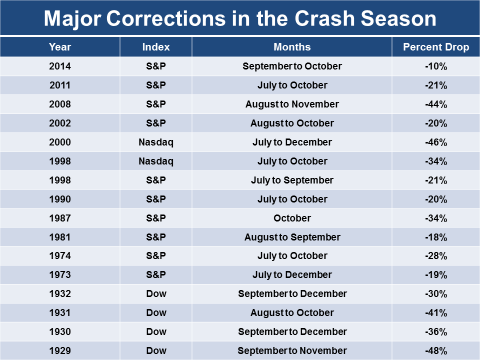 The sharper crashes typically fall between July and October. Sometimes a larger crash will extend into the end of the year. 1929’s chaotic meltdown extended into November. 1930’s didn’t stop until December. Bigger bubbles need longer to let the air out!

This crash looks imminent. Now more than ever, I believe we saw a top on May 20. Since then, we’ve seen a “rounding top” much like we saw into August of 2008 before that crash got nasty. How fitting. The only reason this bubble exists is because we fought off that last one with free money. I guess Mother Nature has a sense of humor.

1. Trying to Time the Market Is a Fool’s Errand – Here’s Proof

2. Hang In There! Panic Selling Is A Failing Strategy – Here’s Proof

3. Predicting What the Stock Market Will Do Is Impossible – Here’s More Proof

We are now on HIGH ALERT!!!!! Grand Supercycle degree wave (IV)’s decline could start soon. We need to pay close attention and be prepared for a September 2015 event that triggers a stock market crash and economic depression.

Whether it is called “systematic trend-following”, “momentum trading” or “turtle trading”, it all comes down to entering trades on the basis of markets breaking out from previously established ranges and following some basic rules thereafter. It requires no special understanding of any given market – just a healthy respect for the price action – and can make you a lot of money in the process. Here are the details.