This article suggests that the Australian and Canadian dollars, and the British

pound Sterling, can expect to decline significantly relative to the U.S. dollar in the months ahead and gold to decline even further relative to industrial commodity prices. Here’s why.


The above introductory comments are edited excerpts from an article* by Scott Grannis (scottgrannis.blogspot.ca) entitled The return of King Dollar.

Trade-weighted Basket of Major Currencies
Against a trade-weighted basket of major currencies, the U.S. dollar has risen over 15% from its all-time low of three years ago, and over one-third of that increase has come in the past three months (see chart below), brightening the outlook in general with the hope that economic and political fundamentals continue to improve in the years to come. 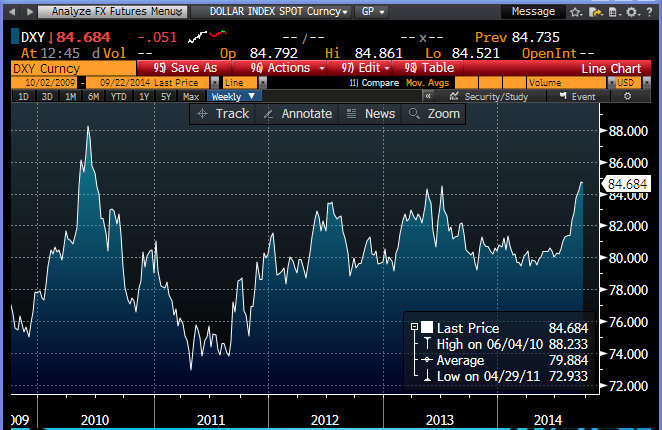 Real Trade-Weighted Basket of Major Currencies
It’s been an impressive rally of late, but as the chart below shows, from a long-term perspective the dollar is still relatively weak, whether measured against a trade-weighted, inflation-adjusted basket of major currencies or against a similar basket of more than 100 currencies. 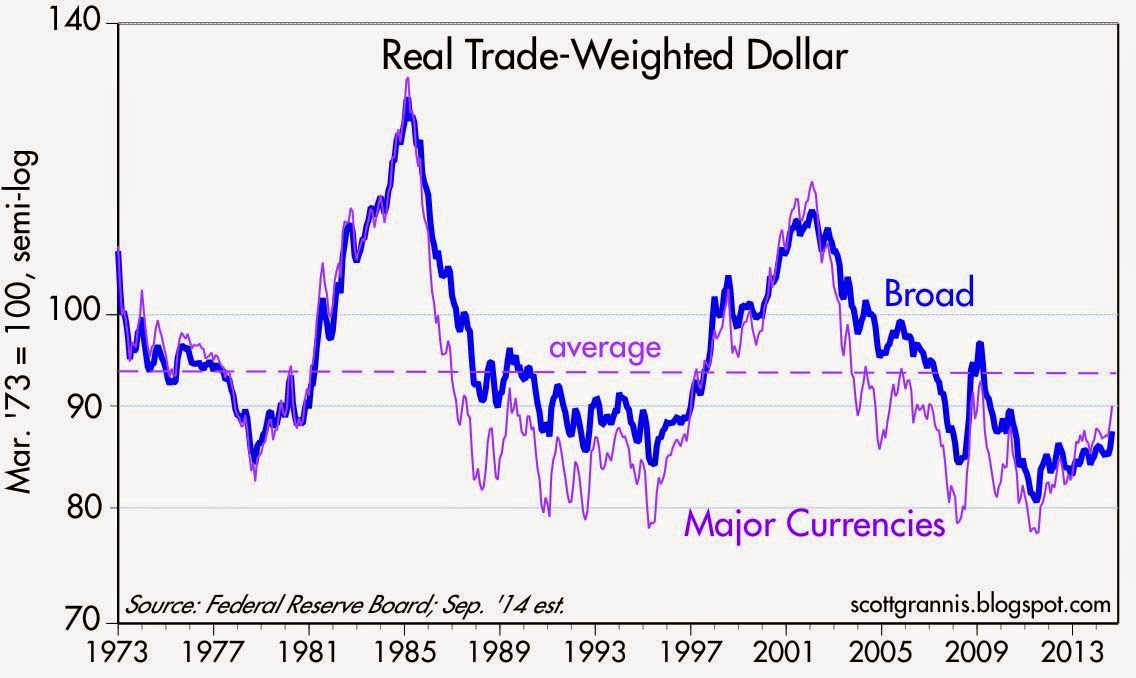 [A stronger U.S. dollar is likely to be both an economic and market positive as the chart below illustrates. The following charts focus on the U.S. dollar’s strength and weakness relative to five major currencies, by comparing their current (spot) value to my calculation of their Purchasing Power Parity value.
Purchasing Power Parity (PPP) theory holds that, over time, currencies move vis-a-vis others in a way that reflects changes in relative prices between between countries. Currencies that depreciate against others typically have higher inflation rates, and currencies that appreciate have lower inflation.
For each currency I’ve picked a base year in which I thought that prices were in rough equilibrium, then adjusted that value over time for changes in relative inflation rates. The current PPP value of each currency is therefore approximately equal to the exchange rate that would produce roughly equal prices for a given basket of goods and services in each country.
1. Euro
By my calculations, the current PPP value of the Euro vis-a-vis the dollar is about 1.16 dollars per Euro. Since the Euro is currently trading at 1.29, that implies that a U.S. tourist visiting the Eurozone today would find that goods and services there cost about 10% more than in the U.S. on average (1.29/1.16 = 1.11). 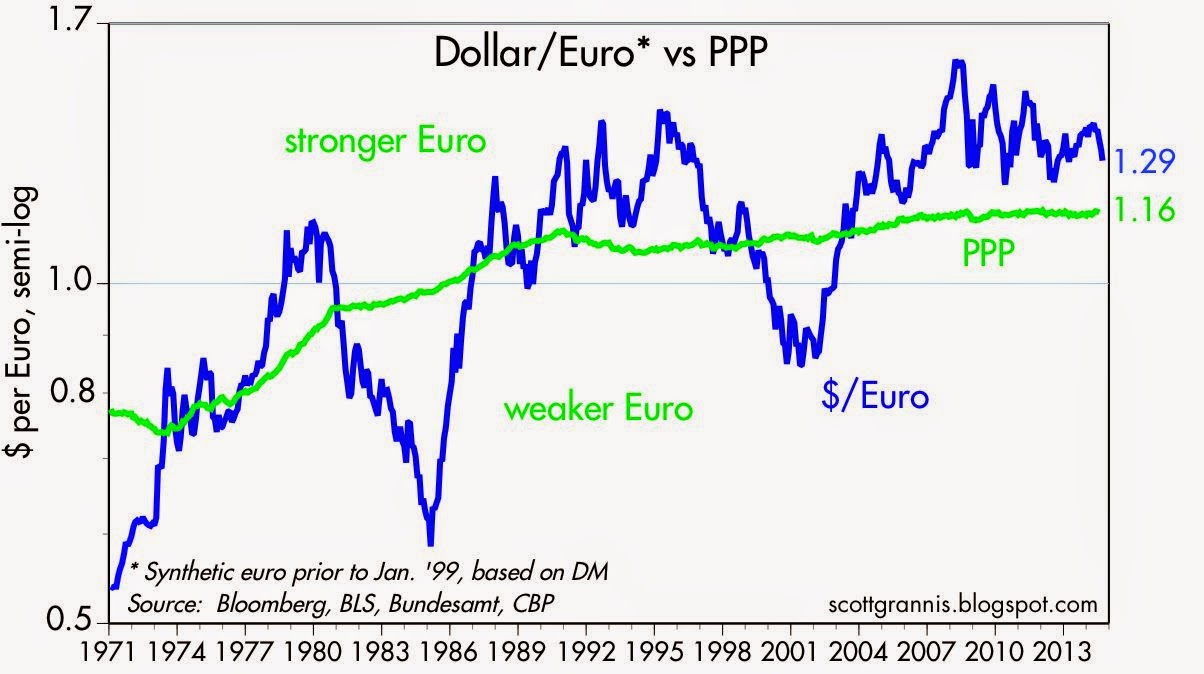 2. U.K. Pound Sterling
As for Sterling, my calculations suggest that goods and services in the U.K. today cost about 25% more than they do in the U.S. In other words, the pound is about 25% “overvalued” relative to the dollar. The fact that the green line has been sloping down for the past several years tells us that U.K. inflation has been higher than U.S. inflation, and that over time the pound is therefore likely to fall relative to the dollar, all other things being equal. 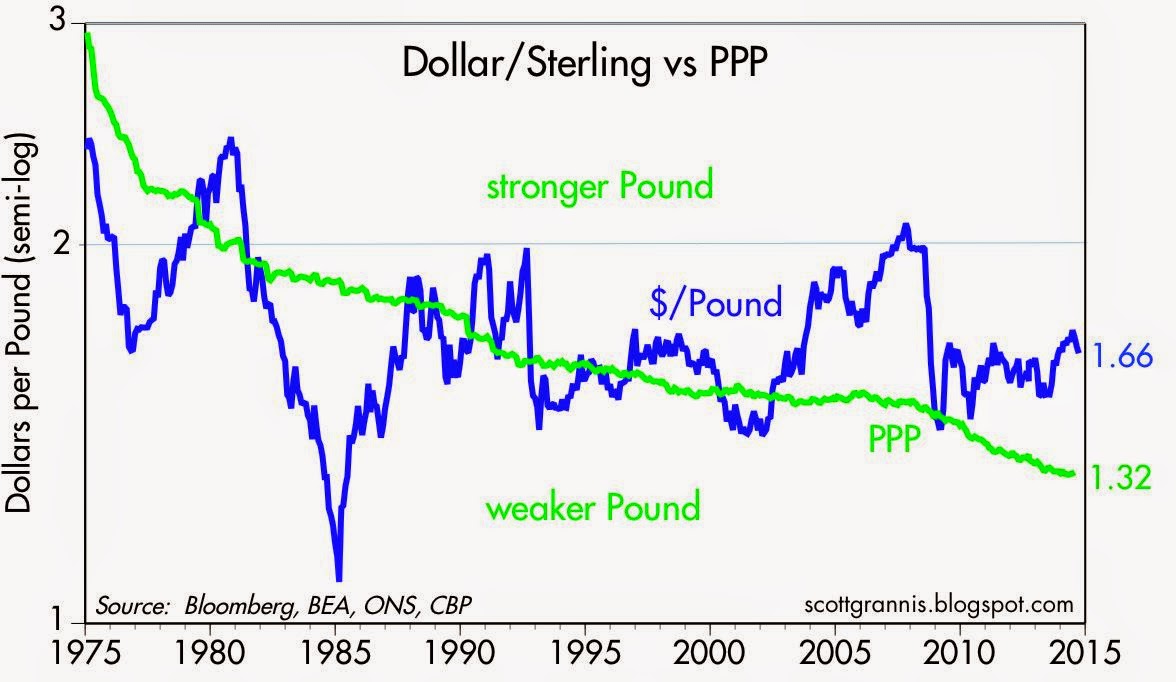 3. Japanese Yen
The yen has experienced a rather dramatic weakening over the past three years, falling from a high of 75 to almost 109, for a loss of over 30% against the dollar. Big currency losses like this are rarely good news, but in this case the big drop in the yen has coincided with huge gains in the Japanese equity market, as the second of the charts below shows. I think that’s because the yen had been so strong for so long against almost every currency on the planet that it had created deflationary pressures which were suffocating the economy.

The yen’s relentless appreciation over the previous 40 years made life very difficult for Japanese industry, for example, since they had to continually cut their costs to remain competitive with overseas manufactures. Now that the yen is closing in on its PPP value relative to the dollar, and the Abe administration is pursuing more growth-oriented fiscal policies, it’s become very good news for the Japanese economy and for the world. 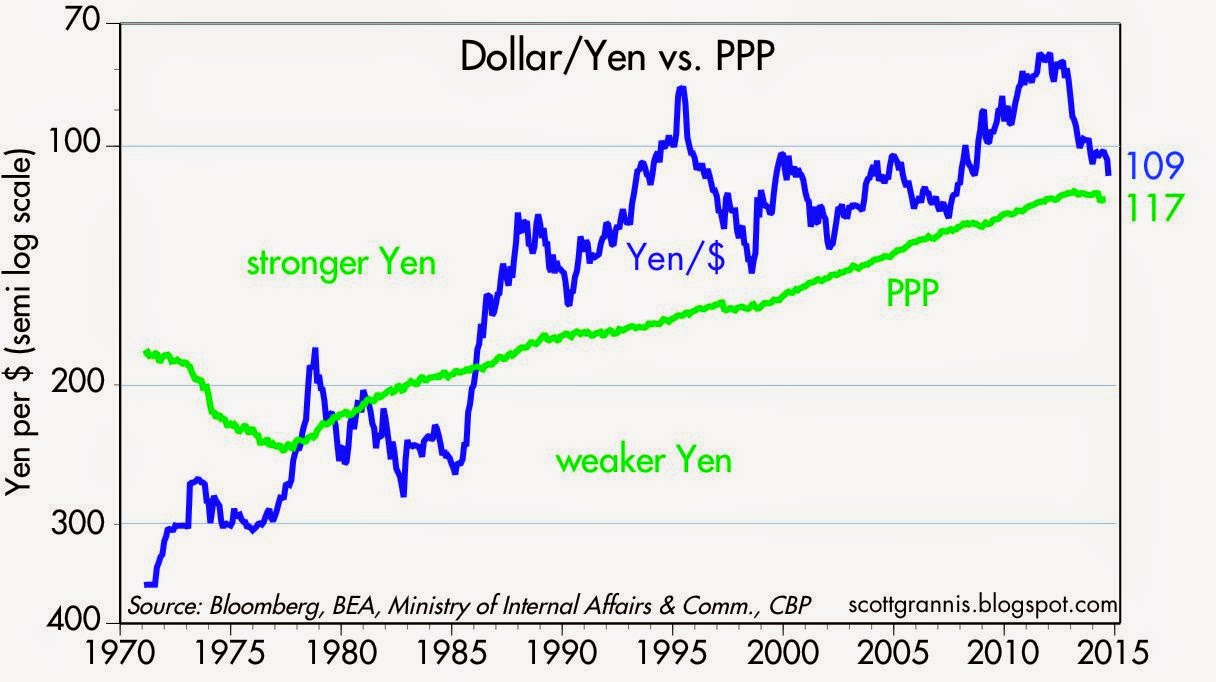 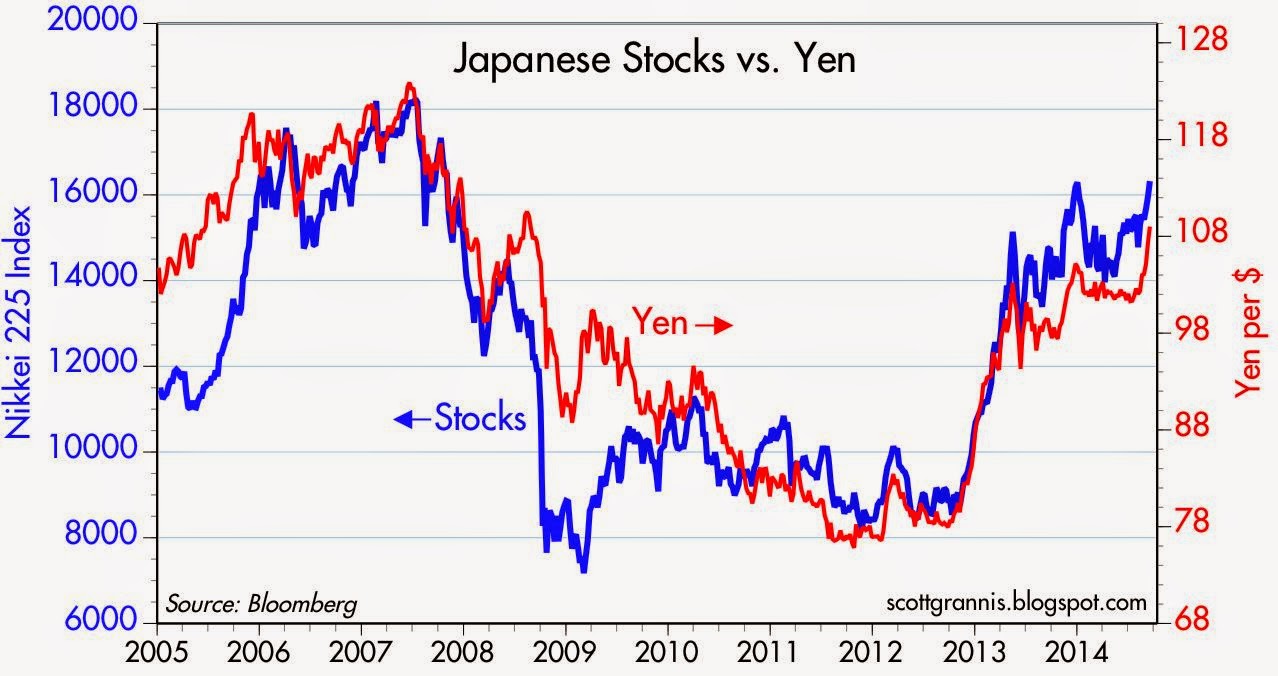 4. Australian Dollar
As the first of the two charts below shows, big changes in the Australian dollar’s value tend to go hand in hand with big (and inverse) changes in the prices of commodities. Commodities peaked in 2011 about the same time the Aussie dollar hit its all-time low; a rising dollar since then has coincided with a return of weaker commodity prices.

Since the Australian economy is heavily dependent on commodity exports, the Aussie dollar has tended to move with commodity prices. It too peaked against the dollar in 2011, and since then it has dropped almost 20% relative to the U.S. dollar. By my calculations, the Aussie dollar is still about 40% “overvalued” against the U.S. dollar, making Australia a rather expensive vacation destination for U.S. tourists (and, by the same logic, the U.S. offers very inexpensive vacations for Australian tourists.) 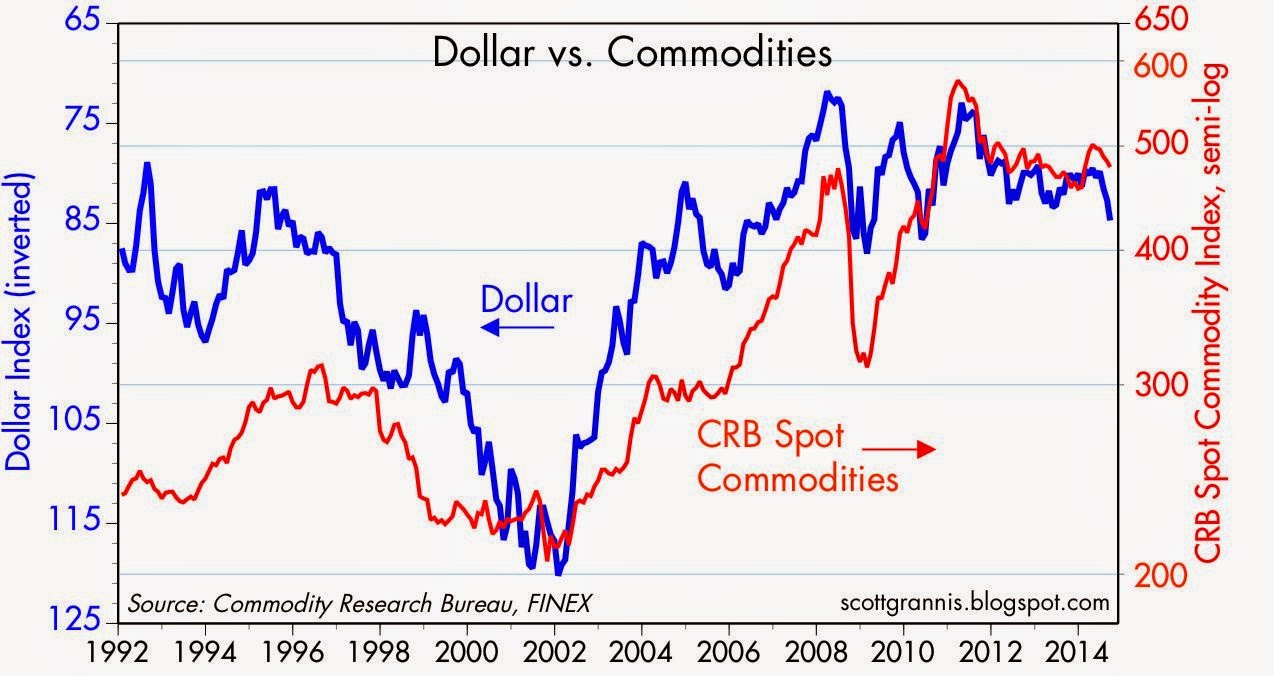 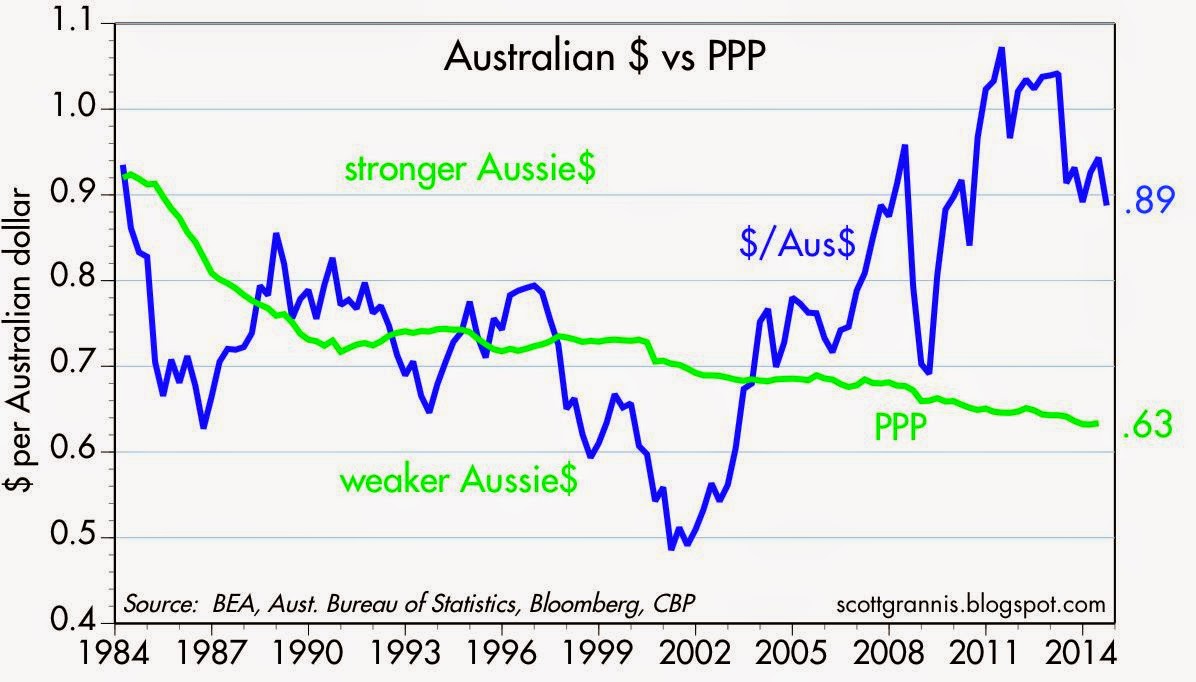 The story is quite similar for the Canadian dollar, since Canada is also dependent on commodities, although not as much as Australia. I figure the “loonie” is still almost 20% “overvalued” against the U.S. dollar. As the chart above shows, Canadian inflation has been almost identical to U.S. inflation over the past 20 years, which makes it likely that eventually the “loonie” will weaken further against the U.S. dollar. 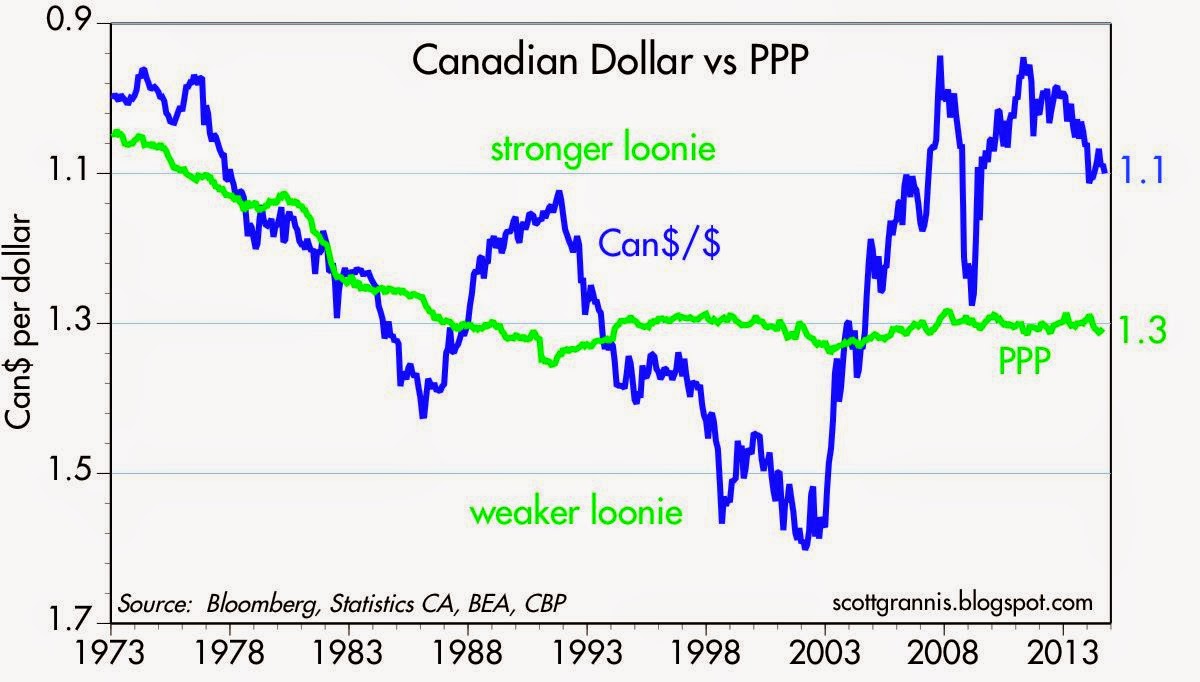 The U. S. Dollar Weakness
Why was the U.S. dollar so weak three years ago? The list of possible causes is long, but I think the important ones are:

We’ve still got lots of problems to deal with (and the dollar is still weak), but we now know that:

In short, things have turned out much better than the market feared. Looking ahead, it’s now pretty clear that: 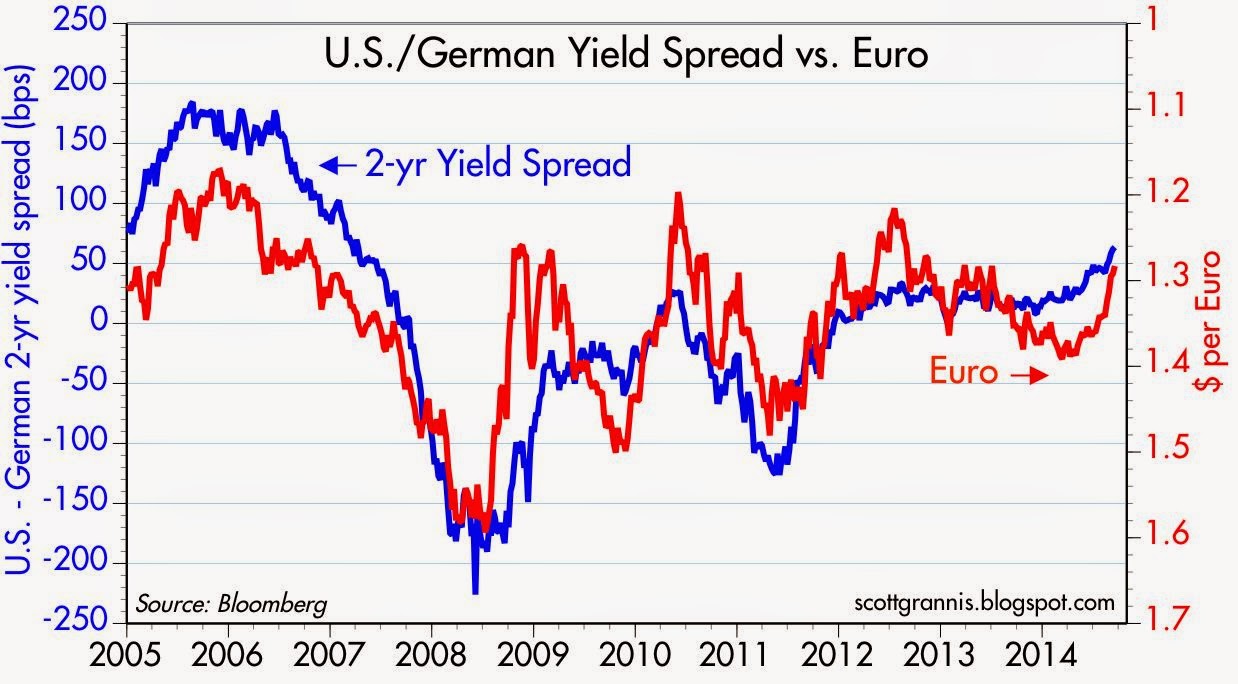 Even though the U.S. economy is saddled with:

it’s doing better than most other countries. In short, things haven’t turned out nearly as bad as the market feared.

This is unlikely to be bad news for emerging market economies, however, because:

As the PPP charts above suggest, the currencies with the most to lose potentially against the U.S. dollar are the Australian dollar (40%), the Canadian dollar (20%), and British Pound Sterling (25%).
Gold vs. Industrial Commodities
A stronger dollar would most likely lead to weaker commodity prices, especially so in the case of gold. As the chart below suggests, gold prices “overshot” commodity prices in the wild and wooly days following the near-collapse of global financial markets during the depths of the Great Recession, and the onset of the Fed’s unprecedented expansion of its balance sheet. 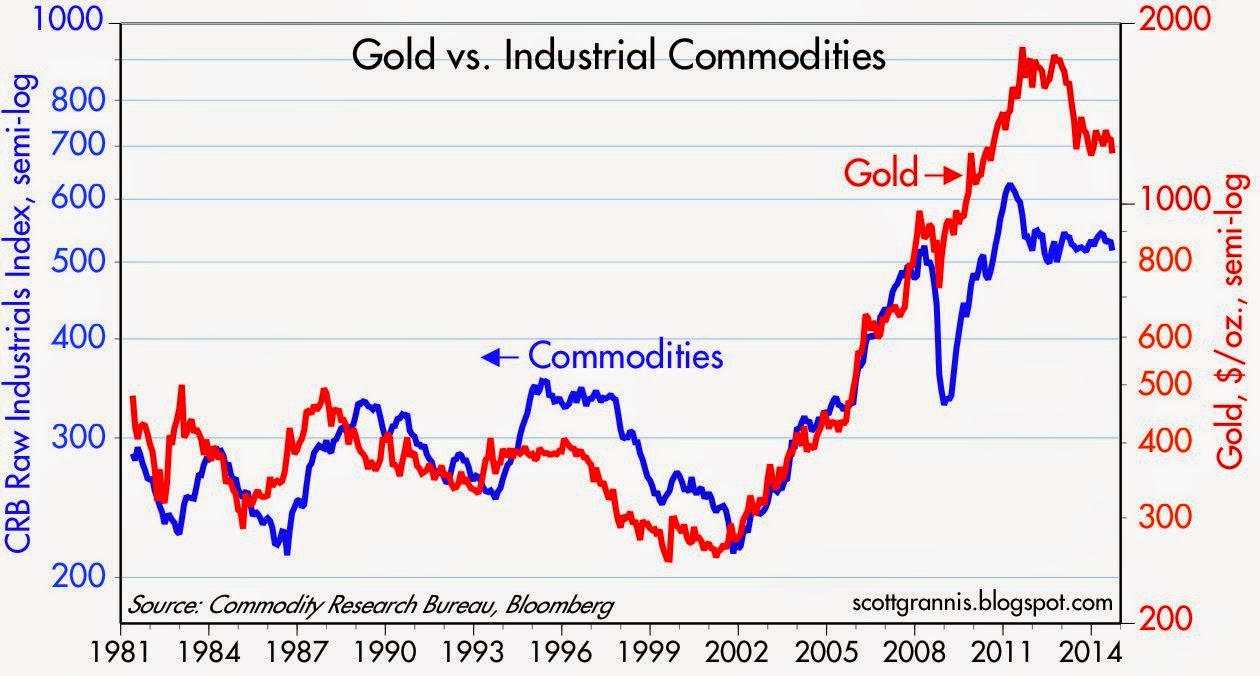 Fortunately, the world has emerged intact, the dollar has not been debased, and inflation remains low. [As such,] without a great deal of fear to sustain it, gold prices are unlikely to sustain their still-lofty levels. In the absence of any new fears, gold is likely to converge back down to commodity prices.

*http://scottgrannis.blogspot.ca/2014/09/the-return-of-king-dollar.html (I’m pleased to note that in my predictions for 2014 I correctly thought that the dollar would strengthen this year, and that gold and commodities were unattractive investments. Check out my other predictions, most of which still appear to be correct.)

An analysis of the ratio between the market capitalization of gold and the gross world product over the past 63 years suggests that the current price for gold has further to fall and that it would not be wise to begin buying gold until prices have fallen below at least $1100 – and not expect gold to appreciate beyond $2,000 any time soon. Here’s why. END_OF_DOCUMENT_TOKEN_TO_BE_REPLACED

2. Noonan on Gold & Silver: “The Market Is ‘Speaking’ & THIS Is What the Charts Are Saying”

This is one of those times where it is best to focus on pictures of the market, over various time frames, to get a better handle on what to expect moving forward, and a look at the charts tells us in no uncertain terms that the end is not yet in sight. Here is our read of what the market is saying, and has been saying for some time. END_OF_DOCUMENT_TOKEN_TO_BE_REPLACED

3. Gold Price Is Falling For This Totally Logical Reason

Despite continuing QE and huge government deficits the price of gold has fallen 35% since its peak in 2011 and is down over 10% from its highs this year. Is there a logical explanation for this?I think there is. Read on. END_OF_DOCUMENT_TOKEN_TO_BE_REPLACED

4. The Gold Price Could Go Even Lower – Here Are 5 Reasons Why

I see various signs that indicate that gold bulls may have to endure one more capitulation to the downside before the next leg of the bull market begins. In what follows I identify what could send the gold price lower and suggest some investment strategies to consider. END_OF_DOCUMENT_TOKEN_TO_BE_REPLACED

Back in early May, 2013, I correctly forecast the lows in gold & silver which occurred 2 months later. Today, my new analyses indicates they both will show further weakness before both jumping dramatically in price by the end of 2014. Below are the specific details of my forecasts (with charts) to help you reap substantial financial rewards should you wish to avail yourself of my insightful analyses. END_OF_DOCUMENT_TOKEN_TO_BE_REPLACED

In spite of the June 2014 pop [I expect to see]…a dip to below the $1190/oz level at some point between now and the end of the month. Here’s why. END_OF_DOCUMENT_TOKEN_TO_BE_REPLACED

7. Gold Price Dependent on Extent of Money Supply NOT Direction of US Dollar Index – Here’s Why

…When the USD starts to rise many assume that this is negative for paper gold ETFs such as GLD as well as physical gold. I’m sure you have heard it before, if the USD goes up then gold goes down, and vice versa…but, in reality, this “rule of thumb” isn’t the case and, in actuality, it would be impossible for the USD and gold to trade inversely with each other. Let me explain. END_OF_DOCUMENT_TOKEN_TO_BE_REPLACED

8. What Are Factors That Motivate Gold Saying Today?

What happens when gold has transitions from a cyclical bull market to a cyclical bear market? what motivates gold to enter a bull market phase? This article has the answers. END_OF_DOCUMENT_TOKEN_TO_BE_REPLACED

9. Decline In Gold Due to Stupidity, Greed & Stubbornness!

It never ceases to amaze me just how dumb and misinformed financial commentators are, often looking in all the wrong places for script, when the fact is that stupidity, greed, and stubbornness runs rampant amongst paper market gold speculators. END_OF_DOCUMENT_TOKEN_TO_BE_REPLACED

10. What Do Current Low Interest Rates Mean For the Future Price of Gold?

Investors commonly assume that rising interest rates adversely impact the gold price, and vice versa. They believe that a rising interest rate environment is indicative of a strong economy, which is supposed to drive investors out of gold and into the stock market. They further assume that investors will want to exchange their gold, which has no yield, for stocks and bonds, both of which have yields and generate income but this intuition is unfounded. Let me explain why that is the case ans why, as such, gold investors shouldn’t fear rising interest rates. END_OF_DOCUMENT_TOKEN_TO_BE_REPLACED

Share
Previous Gold Rush Is On In China (to replace USD with a gold-backed Renminbi?) (+5K Views)
Next Take Note Because Those Investors Who Ignore These Observations Do So At Their Great Peril