These 6 Charts Say: “What’s Going On In the U.S. Economy & Market Is Neither Unprecedented Nor Extraordinary” (+2K Views)

Take note: what’s going on today in the economy and in the markets is not

unprecedented or extraordinary. Below are 6 charts to support said contention.

This article is an edited ([ ]) and revised (…) version of an article by Scott Grannis to ensure a faster & easier read. It may be re-posted as long as it includes a hyperlink back to this revised version to avoid copyright infringement. 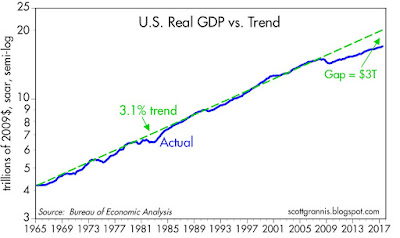 The defining characteristic of the current US economic expansion is its meager 2.1% annualized rate of growth, which stands in sharp contrast, as the chart above shows, to its 3.1% annualized rate of growth trend from 1965 through 2007. If this shortfall in growth is due, as I’ve argued over the years, to misguided fiscal and monetary policies, then the US economy has significant untapped growth potential and could possibly be $3 trillion larger today if policies were to become more growth-friendly.

Value of US equities Relative to GDP 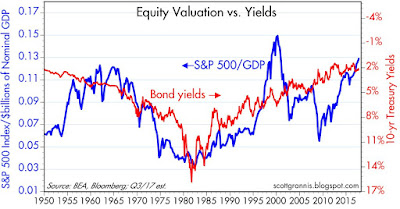 As the chart above shows, the value of US equities relative to GDP tends to fluctuate inversely to the level of interest rates. This is not surprising, since the market cap of a stock is theoretically equal to the discounted present value of its future earnings. Thus, higher interest rates should normally result in a reduced market cap relative to GDP, and vice versa. Since 10-yr Treasury yields—a widely respected benchmark for discounting future earnings streams—are currently at near-record lows, it is not surprising that stocks are near record highs relative to GDP. If the economy were $3 trillion larger, however, stocks at today’s prices would be in the same range, relative to GDP, as they were in the late 50s and 60s. Valuations are relatively high, to be sure, but not off the charts nor wildly unrealistic. 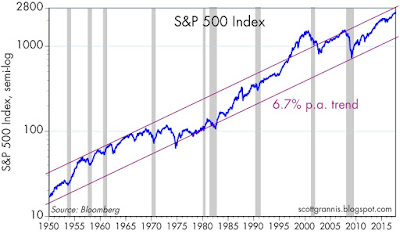 As the chart above suggest, over long periods the value of US stocks tends to rise by about 6.5% per year (the long-term total return on stocks is a bit more due to annual dividends of 1-2%). The chart also suggests that the current level of stock prices is generally in line with historical trends.
Real S&P 500 Index Valuation 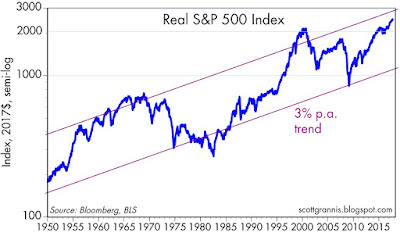 Adjusting for inflation, we see that stock prices tend to rise about 3% a year, and the current level is not unreasonably high, as it was in the late 1990s. 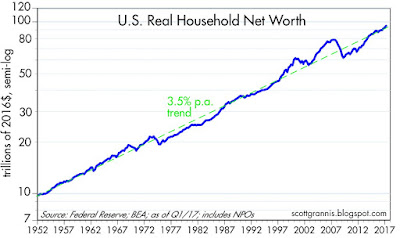 US households (i.e., the private sector) have a net worth that is approaching $100 trillion. That figure has been growing at about a 3.5% annualized rate for a very long time. The current level of wealth is very much in line with historical experience.
U.S. Real Per Capita Net Worth 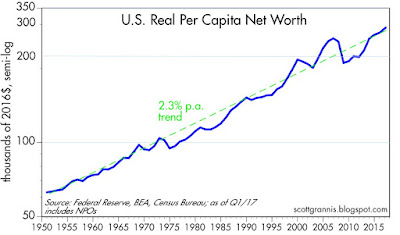 Adjusting for inflation and population growth, the average person in the U.S. is worth almost $300,000. That is, there are assets in the U.S. economy which support our jobs and living standards (e.g., real estate, equipment, savings accounts, equities, bonds) worth about $300,000 per person. We are richer than ever before, but the gains are very much in line with historical experience…

1. What the Economic & Financial Tea Leaves Are Saying

My reading of the economic and financial tea leaves is that the economy continues to grow at a sub-par pace (about 2%), just as it has for the past 8 years. I don’t see evidence of a coming boom, or of an imminent bust… just more of the same. Dull. Here are a baker’s dozen charts, with the latest updates, to flesh out the story:

The charts in this post focus on the absence of evidence of a looming credit crisis.

Share
Previous YOU HAVE BEEN WARNED: The Situation In the Markets Is Much Worse Than You Realize!
Next Institutional Investors Showing Increased Interest In These 5 Lithium Stocks