The charts in this post…focus on the absence of evidence of a looming credit crisis.

If there’s a problem in the credit sphere, it looks to be limited to student loans, and although it’s hard [to] dismiss this problem—which has created a huge burden for students and taxpayers—it’s nice to know that student loans are no longer growing at breakneck speed.

Student loans grew at a frenzied 68% annual rate in the two years following Obama’s 2009 decision to federalize the program and liberalize their issuance (virtually all student loans now come from the federal government). Since then they have grown 360% and now total over $1 trillion. This is problematic: according to the NY Fed, student loan default rates at the end of 2016 were 11.2%, up sharply from the 6.7% rate which prevailed in FY 2007. The good news is that student loans grew at a mere 4% annualized rate in the three months ending June ’17. The problem is acute, but improving on the margin.

Whether we will avoid massive defaults and dislocations remains to be seen, but I wouldn’t rule out a scenario in which taxpayers pick up the tab for hundreds of billions of defaulted and/or forgiven loans. 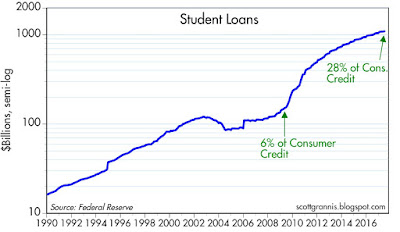 Handing out mortgage loans willy-nilly is what led to the housing crisis, and it’s likely we will see some kind of student-loan crisis in coming years. Fortunately, student loans are still a relatively small share of total credit: 28% of consumer credit, 11% of total home mortgages, and about 7% of total household liabilities. Unlike the housing crisis, in which trillions of flaky mortgages were used as collateral for trillions of financially-engineered securities which in turn were held by investors all over the world, the U.S. government is the one with the most exposure to loss—and these days, $1 trillion isn’t a whole lot of money. A bursting of the student loan bubble is very unlikely to precipitate another global financial crisis. 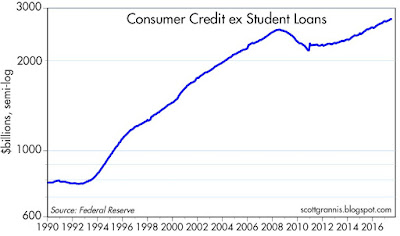 Commercial & Industrial Loans
C&I Loans, a good proxy for bank lending to small and medium-sized businesses, have grown a mere 2.4% in the past year, after years of double-digit growth but the slowdown in bank lending to this sector is not necessarily problematic. 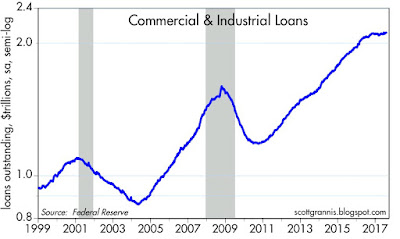 Relative to GDP, C&I Loans stopped growing a year or so ago, and are now beginning to decline. The fact that C&I Loans relative to GDP have rarely been higher than they were last year suggests that the slowdown in C&I Loan growth has more to do with a corporate sector that is satisfied with its current debt load than it does with a reluctance of banks to continue lending. 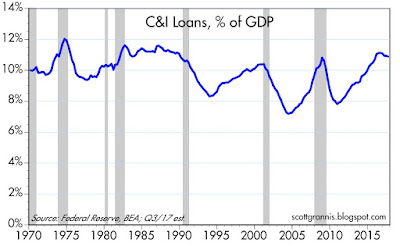 It’s very important to understand that the current Fed “tightening” is fundamentally different from previous tightening episodes, thanks to QE. Before QE, the Fed raised rates by reducing the supply of bank reserves; this created a shortage of liquidity and resulted in higher interest rates. Reduced liquidity and higher borrowing costs eventually brought the economy to its knees by squeezing nearly everyone. This time around, the Fed is increasing short-term rates directly while keeping bank reserves relatively unchanged, and rates are still very low in both nominal and real terms. Bank reserves are still abundant (excess reserves today are about $2 trillion, whereas they were a mere $9 billion at the end of 2007), and thus it is not surprising that there is no sign of a shortage of liquidity in the banking system. Swap spreads are quite normal and credit spreads in general are relatively low. Nobody is getting squeezed by the Fed.

The delinquency rate on C&I Loans, as of June ’17, was only 1.4%. Very few borrowers are getting squeezed these days. From an historical perspective, it’s hard to see that banks are exposed to a collapse in business credit. 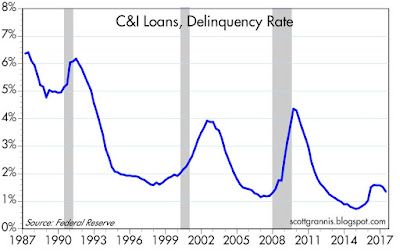 The delinquency rate on all bank loans and leases has rarely been lower than it is today. Bank credit totals almost $13 trillion these days, and in the past year this measure of credit has grown by about 4%. That’s down from 7-8% annual growth a few years ago, but it’s not by any means scary. 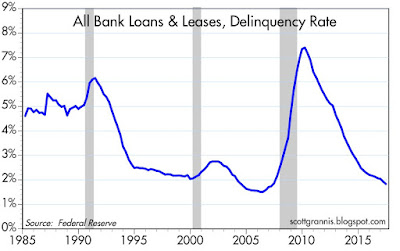 Household leverage has declined significantly since its 2008 peak. Household balance sheets are in pretty good condition these days. Compare today’s leverage with the high levels that preceded the 2008 financial crisis. 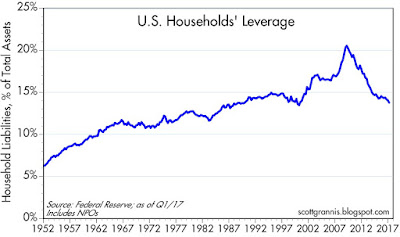 Household financial burdens (monthly payments as a % of disposable income) have rarely been lower than they are today. 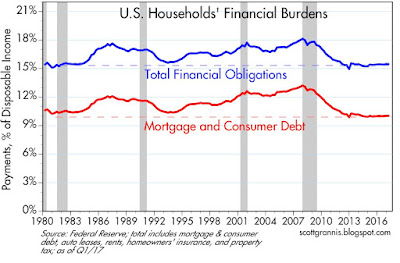 Share
Previous Sprinkle Some Barrick Gold Corp. Stock Into Your Portfolio For A Little Sparkle! Here’s Why
Next The Role of Gold in Your Portfolio (2K Views)