These 4 Factors Could (Should?) Drive Gold Prices Starting This Year (+3K Views)

prices starting this year and beyond.

According to Goldcorp, global mined gold production is likely to start declining this year, with coming years seeing continued shrinkage of mined supply. 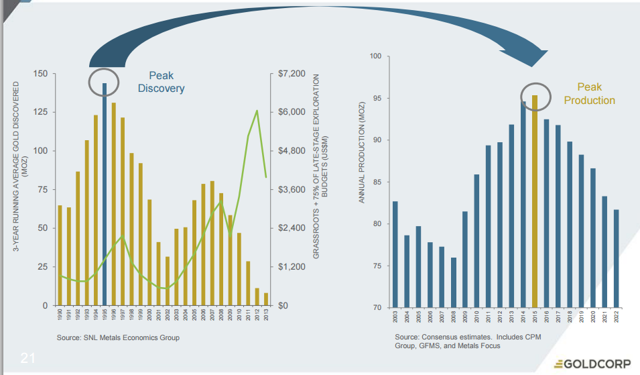 Many investors tend to dismiss mined production trends, due to the fact that the overall gold market is mainly made up of existing gold already above ground which is being traded but doing so is unwise in my opinion. Gold needs to be seen as a currency and the miners need to be seen as this currency’s central bank in many ways. Just like a central bank, miners add to the supply every year. With less and less supply being added every year in coming years, and perhaps permanently, the scarcity value of gold is set to increase.

I believe that the main factor that ended the bull run in gold at its $1,900 peak, was the strong performance of the stock market. This concept should not be too hard to grasp. Money always follows the investment with the best possible potential return. 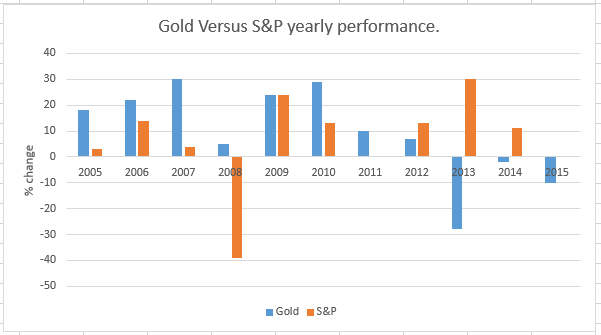 The year 2012 was the year in which, perhaps for the first time, saw the return of some confidence in the economic recovery. With that came the realization that stock indexes were set to embark on a very strong run, while gold had already had a very strong, more than a decade old bull run by then. Therefore, there was little reason to expect that there was much up-side left…[and. as such,] made no sense to leave money stranded in gold, while it became rather obvious that there was a much better opportunity elsewhere.

With 2015 seeing stock market averages flat and to a large degree down around the world and no evidence so far this year that there will be much up-side, stocks are no longer such an attractive alternative to gold. In fact, a reverse of the situation is happening, with stocks now looking largely overvalued within the context of an economy that is rather wobbly, and let us not forget also a Federal Reserve which is no longer looking to pump up assets with cheap money. Within that context, stocks are what gold was at its peak of over $1,900/ounce.

With prices now cut by almost half from that record peak, one thing we can be sure of is that there is only so much further that gold can sink. The fun thing about gold is that its potential upside is always virtually unlimited. Stocks on the other hand could even re-visit the 2009 lows in the next few years, if certain economic or geopolitical events turn out to be less than beneficial to the market. When forecasting the potential up-side on the other hand, few would venture today to claim that there is far more to go, especially given the lack of revenue growth…[by many companies].

The main reason why the stock market is now stagnated is because the economy is weak. Central banks have most certainly done their share in trying to make up for the weak economy, but it proved to be far from adequate. It mainly inflated stock prices, while pushing investors to take more risk than considered prudent in search of yield. The fact is that global economic growth has been weaker during the current economic cycle which started in 2008, than any other since the end of the Second World War.

One of the main side-effects of low economic growth is the massive increase in the global money supply and an increased willingness to pursue a weak currency policy in order to support export growth. Despite this push, global trade has been stagnating. 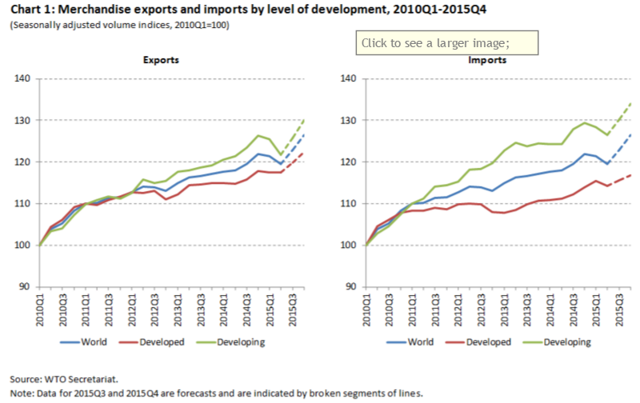 There is literally an infinite list of possible outcomes at this point which could see things go really wrong given the unprecedented central bank policy positions across the world’s main economies. We simply don’t know how it will play out. This is a new experiment in progress. [Indeed,] with fiat currencies caught up in a war for export growth across the world, it makes perfect sense to have some gold holdings in order to preserve wealth.

This segment is of course related to the previous ones. Economics is, after all, at the root of most historical events, especially within the context of the modern world. In turn, geopolitical risks can have a significant negative effect on the world’s economic health.

The most important geopolitical stories are as follows:

By far the most destabilized region in the world at the moment is the mainly Muslim populated Middle East – North Africa region. It is home to an increasing number of failed or failing states, including Syria, Yemen, Libya, Afghanistan and arguably Iraq. A number of other states are possibly on the brink [as well,] such as Egypt…

We also have the increasingly hostile situation between regional powers Saudi Arabia and Iran, which could at any point lead to possible open confrontation…[which] would only have to last about 100 days for the current global oil glut to become an oil scarcity situation. Anything beyond about…[that] and we would be looking at extreme shortages, compounded by national hoarding of supplies across the world. A prolonged period of a complete stop of exports through the Persian Gulf would trigger global economic contraction, which would most likely surpass the depression-era declines.

Europe may not be at the top of the list of potential geopolitical concerns for most people [as] it is most often considered to be one of the main pillars of…world order financially, politically and economically. Since the global economic & financial crisis of 2008 however, I think people have greatly under-estimated the extent of the decay in the European Union’s cohesion and viability…

Britain is the EU’s second largest economy and it is a major net contributor to the $150 billion/year EU budget. A British exit from the EU would not only affect trade ties, between it and the EU, it would also greatly affect EU cohesion, due to an extra strain on the EU budget. Following a British exit a vicious debate would immediately ensue in regards to how to plug the over $11 billion/year EU budget hole. Here again, we will see East versus West largely pitted against each other. The East will argue that the West should contribute more, while the West will argue that the East should have their transfers cut, which would frankly put East EU public opinion firmly in the Euro-skeptic camp. 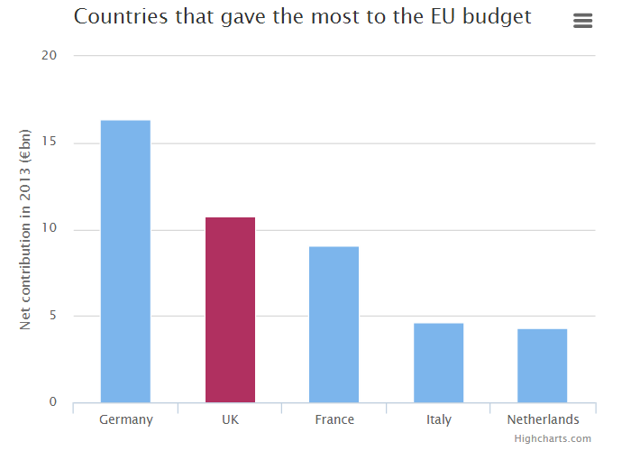 If this was not enough, we also have the continued animosity over gas pipeline politics. In my view, a very crucial mistake was made by the EU when it opted to obstruct the South Stream project… Countries which were stung by its cancellation, such as Italy and Hungary, are rightfully demanding now that the proposed Nord Stream be obstructed by the EU as well, in the same spirit of “energy diversification”. While the world is talking about a current energy glut, in the EU we are seeing the very real prospect of an increasingly severe energy security situation and actual shortages developing in the not too distant future…

We have a multitude of similarly or even more severe emergencies hitting at the same time, with some problems, such as the migrant crisis possibly likely to intensify. We should therefore continue to be very worried about the EU project, because it continues to be in crisis and it is currently getting worse, not better.

…The economic crisis in China is on-going and it is most likely considerably worse than the authorities are letting us know. The situation with China is rather straight forward. A potentially severe economic slowdown can lead to public discontent on a massive scale. Chinese leaders may therefore attempt to stoke nationalism in order to divert the attention of the masses away from hardship and economic insecurity. It is a potentially dangerous situation, which should not be under-estimated.

Within the context of the above 4 points, gold is looking very bright indeed.

[The original article as posted on SeekingAlpha.com was written by Zoltan Ban (zoltansustainableecon.blogspot.ca/) and is presented here by the editorial team of munKNEE.com (Your Key to Making Money!) and the FREE Market Intelligence Report newsletter (see sample here – sign up in the top right corner) in a slightly edited ([ ]) and abridged (…) format to provide a fast and easy read.]

The precious metals sector is entrenched in a seemingly forever bear market while the U.S. dollar’s bull market remains strong and is likely to continue. In this article we discuss our 2016 big picture outlook for the U.S. dollar, gold and gold stocks.

Share
Previous The 100 Best Photographs Ever Taken – Enjoy & Happy New Year! (+2K Views)
Next The Tide May Be Finally Turning For Gold – Here’s Why