the rest of the world – is a HUGE, huge trend. HUGE.

So says Mercenary Trader in edited excerpts from an article* entitled All Hail King Dollar!.

Listen guys (and gals): In comparative terms, the United States is a juggernaut right now… an Arnold Schwarzenegger in a room full of 90 lb. meth addicts. Not only that, but the United States is rich… and I’m talking “richer than any other empire EVER” rich. Correspondingly, every time I hear some goofball talk about how the U.S. government is “broke” I have to resist the urge to smack them upside the head.

I mean, just stop and ponder for a second. The United States is:

In addition to all the above – as if that weren’t enough – the United States is seeing genuine signs of recovery, albeit weak and slow. Now compare that to:

Not only is the U.S. government not “broke” as some macro-illiterate doomers say, the USG has direct access (within a rule-of-law framework) to the most awesome pool of wealth, talent and natural resources ever assembled by one country in the history of mankind. Meanwhile, the rest of the world is almost literally turning to shit. Even the remaining countries with solid economic footing (Canada, Australia) are on the wrong side of the commodity bust with housing bubbles about to pop.

Now do you see why it’s not just possible, but probable, for the U.S. dollar to commence an ass-kicking world tour?

Another way to wrap your head around the magnitude of what’s happening is to read this excellent piece: The REAL Great Rotation by Richard Bernstein Advisors. You really want to read the whole thing but here is an excerpt:

“…it remains startling to U.S. that investors still seem enamored with the emerging markets despite that EM stocks have underperformed U.S. stocks for more than five years, and that EM profit fundamentals continue to be among the weakest in the world (almost 60% of EM companies recently reported negative earnings surprises). The U.S. is even becoming a better growth story than the emerging markets. Smaller capitalization U.S. companies are projected to grow earnings 60% faster than are EM companies (35% versus 14% for the next twelve months).

In addition, many of the major emerging markets have serious monetary problems that make the U.S. situation look rather amateurish. India now has the highest inflation rate among emerging and developed markets and their central bank has actually been easing monetary policy. Brazil’s President recently stated that stimulating growth was more important than was controlling inflation despite disturbing inflation trends and lack of productivity within Brazil. China’s lending policies have been so out of control that the balance sheet of the People’s Bank of China is now roughly 50% bigger than the Fed’s”

For more on deeper level fundamentals as to why the USD is back in a secular bull market – only paused temporarily by JPY carry trade unwinds – check out our call for a USD bottom more than a month ago.

Some other good news: A lasting resurgence in the U.S. Dollar Index (DXY) need not be bearish for U.S. equities.

For many years, as I’m sure you’ll remember, the dollar was a key “risk off” indicator. When the dollar was up, equities tended to be down and vice versa. This was a function of heavy asset flows into Emerging Market (EEM) and multinational blue chips benefiting from emerging market revenues but, now, the situation has reversed. With U.S. domestic equities the new sweet spot for bullish positioning (see Bernstein argument), U.S. equities can rise even as dollar flows repatriate back home to the United States.

The correlation chart below, from Bespoke Investment Group, shows how the U.S. dollar / U.S. equities relationship has changed. The dollar and U.S. equities now have a positive correlation, rather than the negative one that persisted for years. This, again, is a function of the shifting relationship as outlined above (and in our earlier dollar piece). 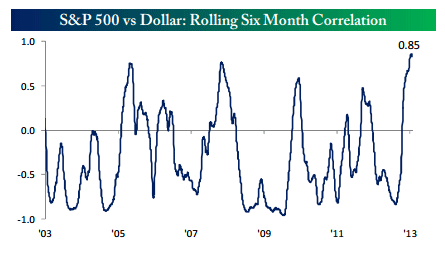 Think of this not just as a “great rotation” but a “great unwinding.” For a long time EM debt and EM equities seemed the place to be. With the dollar strengthening and the rest of the world faltering relative to the United States, that is no longer the case. With every uptick in the greenback, EM assets look a little bit less attractive in relative currency terms (not to mention the problems they are facing – riots in the streets anyone?).

1. Time to Sell the U.S. Dollar & Diversifying Into a Basket of Hard Currencies?

Stocks are up. Bonds are expensive. Dollar cash is unlikely to preserve purchasing power in an environment of negative real rates. Diversifying to a basket of hard currencies might help to mitigate some of the risks out there. It clearly adds currency risk but in an environment where there may not be such a thing as a risk free asset, it might be a risk worth pursuing… Read More »

The US Dollar is HOT so what gives? It rallied in 2012 and has gone nuclear in 2013. According to Morgan Stanley it’s because of…. Read More »

Share
Previous Gold & Gold Stocks: A Look At the Current Weakness & Future Expectations (+2K Views)
Next Will the Rubber Band of Mr. Market Snap Up or Down From Here? (2K Views)