While not widely reported or analyzed, over the past several months there has been an enormous amount of

buying in the various markets for physical silver – both one-ounce sovereign-minted coins and refined bars. Along with some standard trading signals I’ll discuss below, I believe the activity in the market for physical silver is signaling the potential for a large upside move sometime this year. Let me explain.

So says Dave Kranzler (investmentresearchdynamics.com) in edited excerpts from his original article* entitled Is Something Big Brewing In Silver?.

Kranzler goes on to say in further edited excerpts:

“As you can see from this chart below (source: King World News, edit in white is mine), silver is in its most oversold condition since 1976: 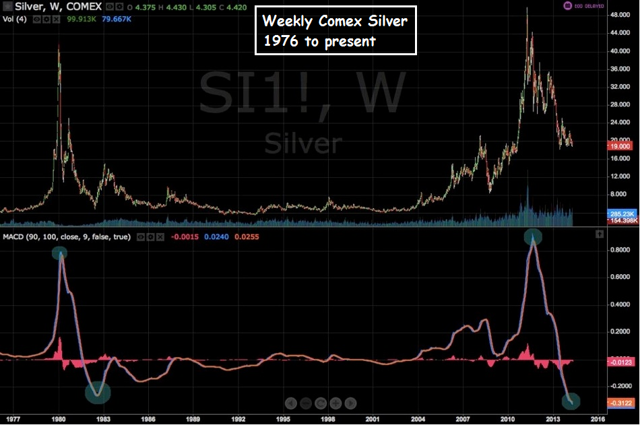 While the 1980 percentage sell-off  in silver was greater than the percentage sell-off in silver that started in April 2011, you can see from the MACD momentum indicator on the bottom half of the graph that, technically, silver is more oversold than at any time in the last 28 years. This is significant because it suggests that not only was the 18.56 close on June 27, 2013 most likely the bottom of the big price correction in silver but traders who are short or flat will be looking to cover shorts, start new long positions or add to current long positions on price strength. Thus, from a probability stand-point, silver is more likely to move higher from here than lower.


It seems that as the price of silver continues to drift under $20, silver coin sales continue to increase. At some point the investment demand for physical silver will put a strain on mined supply.

In my opinion, the unanticipated demand from India will eventually be reflected in higher silver prices, as the high volume of demand will likely affect relative supply.

…Recently an extraordinary amount of silver has been withdrawn from both the Comex and the Shanghai Futures Exchange (SFE) (source: SRSrocco.com): 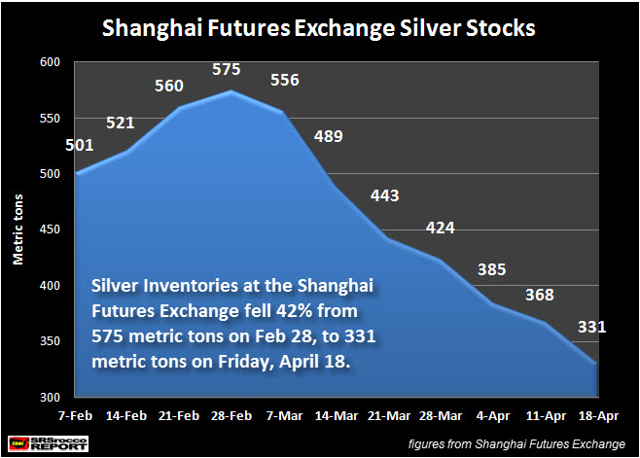 In the week after the above graph was produced, another 73 tonnes were removed from the SFE. Since the end of February, a total of 317 tonnes of silver have been taken out…[and] it is highly probable that this silver was either put away in private investment vaults or used in commercial applications inside of China.

Similarly, since the end of February, 368 tonnes of silver have been removed from the…Comex vault accounts… As with China, this silver is either being transferred to private vaults or is being used in industrial applications. 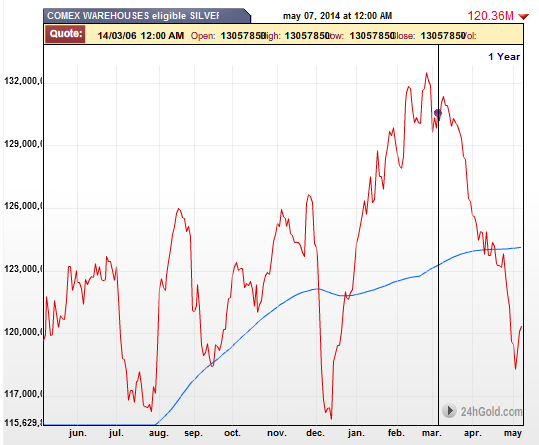 The removal of nearly 700 tonnes of silver from the SFE and the Comex in less than two months, in my opinion, is an indication of an acceleration in demand for silver and an indication that the silver bar market is starting to get tight…[and because of this] the price of silver is going to have to move a lot higher as a mechanism of creating some kind of equilibrium between supply and demand. While above-ground visible stocks of silver, like the Comex, the SFE and the various physical silver bullion trusts are potential sources of supply in excess of mining output and scrap recycling, as those sources of silver become depleted a shortage will develop unless the price of silver moves higher.

Finally, the current gold/silver ratio is signaling the potential for at least a big short-term move higher for silver: 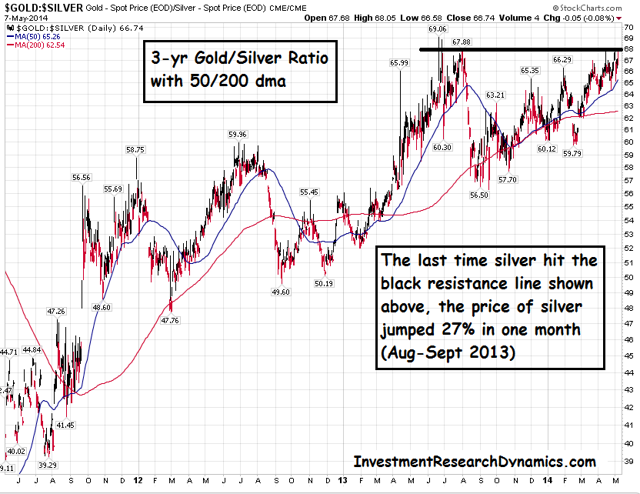 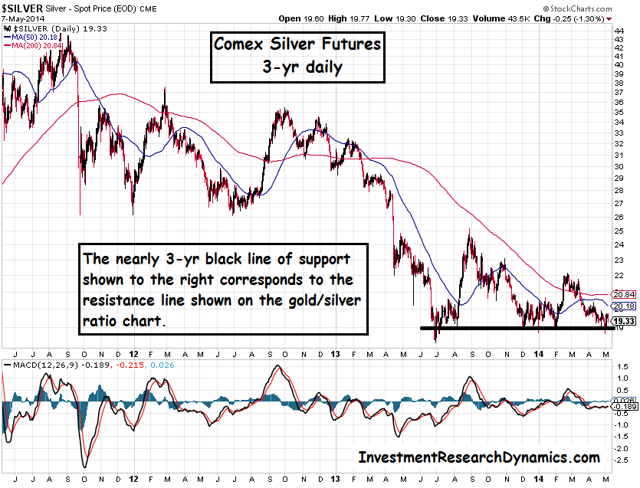 Although it may not seem like it, gold has been one of the best performing investments YTD in 2014. In comparison, silver is slightly down for the year. If the gold/silver ratio repeats its “behavior” from last summer, it is highly probable that silver will spike higher from here, at least in the short term.

The above being the case, I believe that the trading and fundamental factors as I analyzed them are the start of this process and, in the context of my analysis, I believe silver will ultimately experience significantly higher rates of return than gold over the next few years…”

The majority of analysts maintain that gold will reach a parabolic peak price somewhere in excess of $5,000 per troy ounce in the next few years. Given the fact that the historical movement of silver is 90 – 95% correlated with that of gold suggests that a much higher price for silver can also be anticipated. Couple that with the fact that silver is currently greatly undervalued relative to its average long-term historical relationship with gold and it is realistic to expect that silver will eventually escalate dramatically in price. How much? This article applies the historical gold:silver ratios to come up with a range of prices based on specific price levels for gold being reached. Words: 691 END_OF_DOCUMENT_TOKEN_TO_BE_REPLACED

There’s a new Silver Sheriff in town, and it happens to be located north of the U.S. border. While [American] Silver Eagle sales and growth were impressive in 2013, [Canadian] Silver Maple Leaf sales outgunned the competition by a wide margin. [By how much? Take a look.] END_OF_DOCUMENT_TOKEN_TO_BE_REPLACED

3. Stock Market Will Collapse In May Followed By Major Spike in Gold & Silver Prices! Here’s Why

The unintended consequences of five years of QE are coming home to roost! In May or early June the stock market parabola will collapse…followed by a massive inflationary spike in commodity prices – particularly gold & silver – that will collapse the global economy. END_OF_DOCUMENT_TOKEN_TO_BE_REPLACED

4. Silver Has the Potential to Increase 4-Fold From Today’s Price – Here’s Why

The price ratio of gold to silver has fallen precipitously in raging bull markets for the metals, so the silver price could have an upwards move at four times the rate of any gold price increase. I think that the fundamentals look better than ever, and…[that] there is an explosive move coming in 2014. [Indeed,] I think that within a reasonable timeframe silver will probably trade over $100. END_OF_DOCUMENT_TOKEN_TO_BE_REPLACED

5. Massive Debt Levels Will Push Silver To $150 And Beyond

6. The Most Explosive Turnaround to the Upside — EVER — Is Coming In the Precious Metals Sector

I am 100% confident that 1) precious metals will bottom this year and resume a new leg to the upside, 2) the extreme emotions right now regarding gold and silver are typical at major turning points and 3) all the underlying fundamental, cyclical and technical conditions for a new bull market in gold and silver are in place. Here’s an update on the latest action in gold, silver, platinum and palladium END_OF_DOCUMENT_TOKEN_TO_BE_REPLACED

7. Why Demand For Gold Keeps Expanding In China & India

Lifted by a continued surge in Asian gold sales, consumer demand for gold reached an all-time high in 2013 at 3,893 tonnes. Amazingly, 54% of this demand came from two places: India and China. However, it is only recently that the East has dominated global demand for the yellow metal. In this infographic, we look at India and China specifically to see why demand keeps expanding in the East. END_OF_DOCUMENT_TOKEN_TO_BE_REPLACED

Share
Previous There’s Evidence – Plenty of It – That the Bear Is No Longer Hibernating. Here’s Why
Next Collapse of S&P 500 May Be Only Weeks Ahead! Here’s Why (+3K Views)

Here’s How to Store Your Precious Metals