There’s Evidence – Plenty of It – That the Bear Is No Longer Hibernating. Here’s Why

The health of a market is best assessed along three vectors: fundamentals, technicals (price action) and

sentiment [and this is what each is saying about the health of the markets these days.]

The above are edited excerpts from an article* by mercenarytrader.com in an article* posted on SeekingAlpha.com with the title How Do We Know The Bull Market Isn’t Over?.

What the Technicals/Price Action Are Saying

“On the technicals / price action side, there can be no doubt of grave trouble. The most risk-sensitive portion of the market (tech and small caps) is already in bear market territory, as the chart below shows (hat tip to Business Insider): 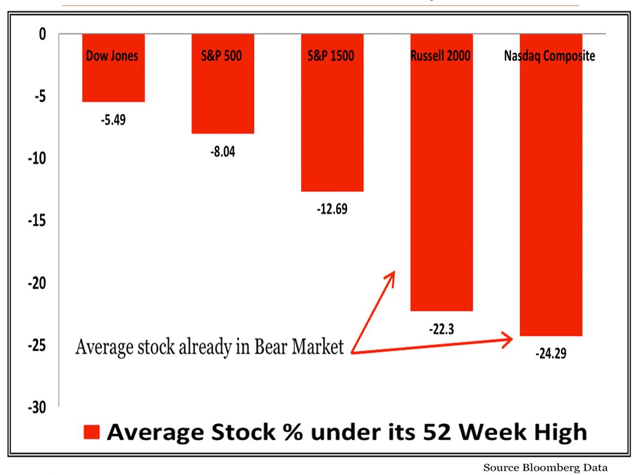 What the Fundamentals Are Saying

The fundamentals side looks equally dodgy. Earnings for the Dow industrials are no great shakes and, in fact, earnings season overall looks surprisingly weak. There are strong arguments we are coasting on the fumes of “magic pixie dust” sprinkled around by Ben Bernanke, and that the transition to Janet Yellen is coinciding with the death of the OCBN…There is a logical argument that the stellar upside of 2013 represented a sort of last hurrah for faith in central banks to keep these markets elevated in a time of permanent malaise.

What Is Sentiment Saying?

…Our focus is not on being right, but making money. In general terms, a trader should be as detached from the actual outcome of events as a bookie making a point spread. The process itself, if good, generates positive return over a meaningful number of statistical trials and our process is tapping us on the shoulder as of this writing, saying “Hey! No guarantees… but this bad boy could be rolling over in a big, long-term way”…

We can’t help but wonder, in a devil’s advocate sort of way, if a statement such as “the bull market is not over” is not meant to be a sort of comforting palliative – a glass of warm milk before bed for those who yearn in their hearts to be long and stay long because, while one cannot make a slam dunk case the bull has been slain, there is certainly evidence – plenty of it – that the bear is no longer hibernating.”

For today’s seriously overextended and overvalued US stock markets the best-case scenario is a full-blown correction approaching 20% emerging soon while the worst case is a new cyclical bear market that ultimately leads to catastrophic 50% losses. END_OF_DOCUMENT_TOKEN_TO_BE_REPLACED

2. A Rise In Silver Prices and a Fall In S&P 500 Index Seems Both Inevitable and Imminent – Here’s Why

Silver has had three bad years while the S&P has had 5 good years. It is time for both markets to reverse. Here’s why. END_OF_DOCUMENT_TOKEN_TO_BE_REPLACED

3. Which Will It Be – 63 Years of Data Suggesting A Major Pullback Over the Next 6 Months OR the Power of This Market Rally?

Last year’s “Sell in May” period was only the third time since the turn of the century that stocks have postedstockcrash-2 double-digit gains from May through October so, with stocks still near all-time highs as the calendar flips to May, do the law of averages suggest we’re on the brink of a major pullback over the next six months? END_OF_DOCUMENT_TOKEN_TO_BE_REPLACED

4. 2 Stock Market Indicators Are Saying “Be careful, don’t get caught up in the euphoria”

In the midst of all the optimism we see towards key stock indices these days, there are two leading indicators that are flashing warning signals. They say, “Be careful, and don’t get caught up in the euphoria.” END_OF_DOCUMENT_TOKEN_TO_BE_REPLACED

5. Are Stock Market & U.S. Dollar About to Crash? Will Gold Be the Major Benefactor?

Something is clearly out of whack. Gold has failed to push higher against the backdrop of a lower U.S. dollar for the first time in over a decade and, with pressure on the dollar increasing, the failure of support could ignite a massive decline. Is gold preparing to launch this time? END_OF_DOCUMENT_TOKEN_TO_BE_REPLACED

No stock can resist gravity forever. What goes up must eventually come down. This is especially true for stock prices that become grotesquely distorted. We have been – and still are – living in another dotcom bubble, and – like the last one – it is inevitable that it is going to burst. END_OF_DOCUMENT_TOKEN_TO_BE_REPLACED

7. Stock Market Will Collapse In May Followed By Major Spike in Gold & Silver Prices! Here’s Why

The unintended consequences of five years of QE are coming home to roost! In May or early June the stock market parabola will collapse…followed by a massive inflationary spike in commodity prices – particularly gold & silver – that will collapse the global economy. END_OF_DOCUMENT_TOKEN_TO_BE_REPLACED

It’s frustrating to see key stock indices keep pushing higher when historically proven market indicators are all warning of a crash ahead. Irrationality is exuberant to say the very least, and that’s why I believe this rally is counting its last days. END_OF_DOCUMENT_TOKEN_TO_BE_REPLACED

9. Time the Market With These Market Strength & Volatility Indicators

There are many indicators available that provide information on stock and index movement to help you time the market and make money. Market strength and volatility are two such categories of indicators and a description of six of them are described in this “cut and save” article. Read on! Words: 974 END_OF_DOCUMENT_TOKEN_TO_BE_REPLACED

With both the fundamentals and the technicals saying the stock market is a risky place to be, we await its crash back to reality. Here’s why. END_OF_DOCUMENT_TOKEN_TO_BE_REPLACED

Warren Buffett’s favorite indicator – the ratio of the value of U.S. stocks to GDP – is seen by him as a reliable gauge of where the market stands and these days it suggests that all the main indexes are pointing to an imminent 50% crash. END_OF_DOCUMENT_TOKEN_TO_BE_REPLACED

12. End of “Wall Street Party” Will Be a Catastrophe! Here’s Why

The markets are considerably, fantastically overbought and that whatever happens after this “Wall Street Party” is going to be a sort of catastrophe. Here’s why. END_OF_DOCUMENT_TOKEN_TO_BE_REPLACED

The Fed has manufactured a parabolic move in the stock market…which is much more aggressive (and thus even more unsustainable) than witnessed at either the 2000 or 2007 stock market tops. Parabolas always collapse – there are never any exceptions – so when the pin finds this bubble it’s going to take down not only our stock market, but unleash a destructive force on the global economy. END_OF_DOCUMENT_TOKEN_TO_BE_REPLACED

14. Ride the Market Waves With These 6 Momentum Indicators

It is hard to know what to buy or sell let alone just when to prudently do so. Thank goodness there are indicators available that provide information of stock and index movement of a more immediate nature to help you make such important decisions. This article describes the 6 most popular Momentum Indicators. If ever there was a “cut and save” investment advisory this is it! Words: 1234 END_OF_DOCUMENT_TOKEN_TO_BE_REPLACED

Share
Previous Gold Demand In China & India – What Does the Future Hold?
Next Silver Is Signaling Potential For Large Upside Move This Year – Here’s Why (+2K Views)

Physical Gold vs. Gold Stocks: Which Perform Best In A Recession? (+29K Views)