The global equities markets is not the only place where the

China sell-off has had an effect. It has seeped into the global economy, slumping shipping and slowing global trade…[to the point where] the Baltic Dry Index is at an ALL TIME LOW. As the year progresses, it will be interesting to keep an eye on the BDI and track its movement – especially as it relates to China and commodity prices.

To put the the Baltic Dry Index (BDI), a shipping and trade index that measures changes in the cost to transport raw materials such as metals, grains and fossil fuels by sea, into perspective, it reached about 11,800 back in May of 2008, when the amount of ships available were not enough to meet China’s insatiable demand for commodities. By 2009, the BDI sunk to about 660 as trade credit dried and world trade slowed. The index recovered to and stayed above 2,000 in early 2014 and above 1,000 mid-last year. BDI is currently at 317. 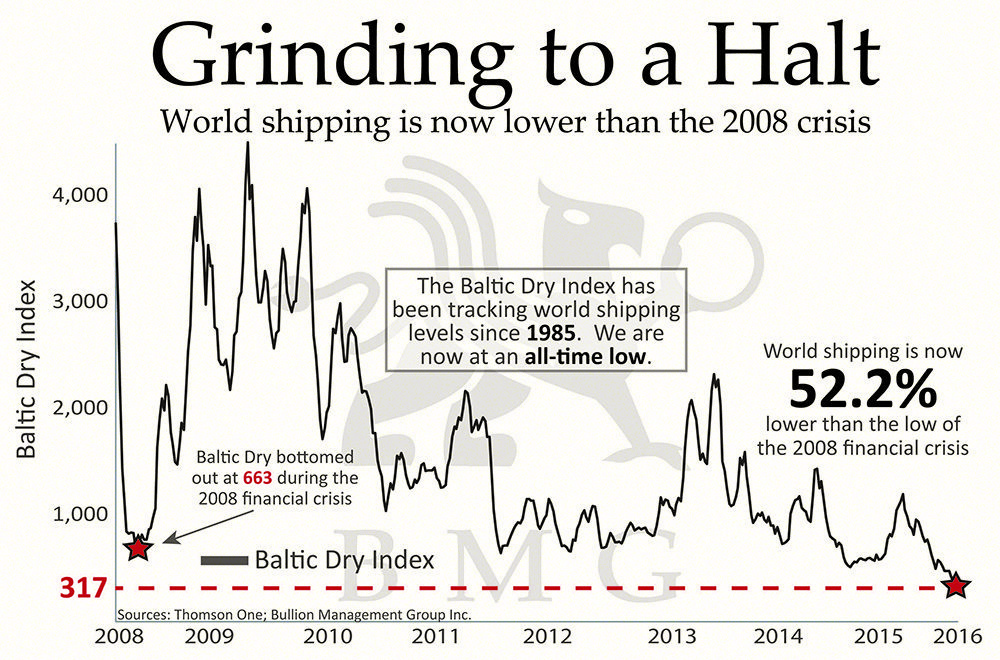 Why is it so low?

Trade is a significant driver for Asian economies. It accounts for 70-80% of GDP, according to ANZ chief Asian economist Glenn Maguire. For the last couple of decades, leading up to the financial crisis of 2008, Asian exports grew by an average of 10% annually. The expeditious growth of the Asian economies was pioneered in the 1980s by the “tiger” nations, comprised of Hong Kong, Singapore, Taiwan, and Korea. It extended to China in the ’80s, followed by India in the ’90s and 2000s. This made Asia the export hub of the world and has ingrained these economies into the global supply chain.

The World Bank recently published their global outlook update, in which they cited that the depreciation of currencies against the USD has culminated in slowing imports, which is to be expected. However, what was not expected was that it did not stimulate exports as it normally should, showing the extent to which trade is intertwined with the global supply chain and minimizing the effects of currency fluctuations.

The largest and most entrenched economy in the global supply chain, China, has seen its demand for raw materials falter, halting exports from commodity producing countries such as Australia and Brazil. This is attributed to two factors:

The latter factor leads to another issue: countries will have to figure a way to alter their supply chains, taking into consideration the decreasing role of China.

The following image, taken from a real-time ship tracker, VesselFinder.com, puts the BDI in perspective, as it shows most of the ships around the world are anchored offshore or in-port. 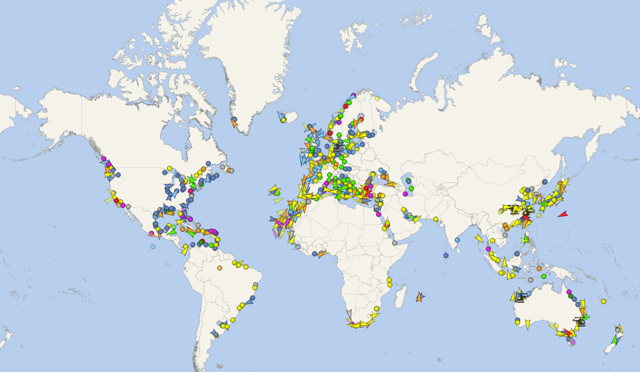 As the year progresses, it will be interesting to keep an eye on the BDI and track its movement, as it relates to China and commodity prices…

[The original article as posted on SeekingAlpha.com was written by Zouhare Al-Baroudi and is presented here by the editorial team of

in a slightly edited ([ ]) and abridged (…) format to provide a fast and easy read.]