is little or no tail risk in the immediate future. It’s time to get long equities…but I have this nagging feeling that these market conditions are too good to be true. If you look, there are a number of technical and fundamental clouds on the horizon.

So says Cam Hui (humblestudentofthemarkets.blogspot.ca ), a portfolio manager, in edited excerpts from his original article* entitled My Investment Plan For 2014.

[The following is presented by Lorimer Wilson, editor of www.FinancialArticleSummariesToday.com and www.munKNEE.com and the FREE Market Intelligence Report newsletter (sample here – register here). The excerpts may have been edited ([ ]), abridged (…) and/or reformatted (some sub-titles and bold/italics emphases) for the sake of clarity and brevity to ensure a fast and easy read. This paragraph must be included in any article re-posting to avoid copyright infringement.]

Current macro conditions indicate that we are in a sweet spot for equity returns.

1. The U.S. economy continues to revive and it is starting to show signs of growth acceleration.

2. Housing: Short-term and coincidental indicators are all pointing up but…[there is concern] about the rise in mortgage rates…[going into] late 2014 and early 2015…[and,] in particular, the bond market’s reaction to the inevitable Fed tapering, whenever that occurs…Will long rates start to back up and push up mortgage rates and dampen growth in the cyclically sensitive housing sector?

3. Europe: European leading indicators are still pointing up, though coincidental indicators still look punk. The ECB has made it clear that it is prepared to give the market a Draghi Put, which is supportive of growth.

4. China is growing, albeit in an unbalanced fashion.

Simply put, global growth is continuing and there is little or no tail risk in the immediate future. It’s time to get long equities. What could possibly go wrong? [Really?]…

Too Good to Be True?

Maybe it’s because I apprenticed under people who lived through the terrible bear market of 1974-75 that I worry so much, but I have this nagging feeling that these market conditions are too good to be true. If you look, there are a number of technical and fundamental clouds on the horizon:

1. 2014 is the second year of the Presidential Cycle, which is usually not equity friendly… The two first years of the four-year cycle are usually the worst with the last two usually the best. Bear markets usually occur during the first two years. Since 2013 (the first year of this term) was so strong, historical odds for 2014 (the second year) to suffer a downside correction are pretty high. 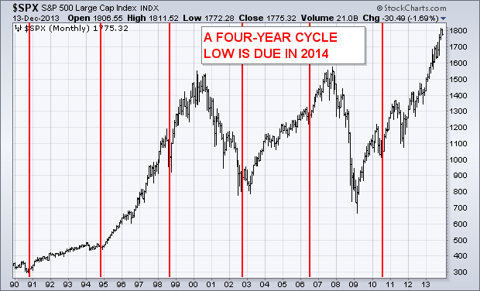 …Assuming the four-year pattern repeats, the next bottom is due in 2014 and most likely during the fourth quarter. That carries both good and bad news. While the second year of a presidential term (like 2014) is usually the weakest, the third year (2015) is usually the strongest. The bad news is that 2014 is likely to experience a major stock correction. The good news is that correction should lead to a major buying buying opportunity later in the year.

2. The Value Line Median Appreciation Potential, which has a growth tilt, hasn’t been this bearish since 1969. The Value Line Median Appreciation Potential (VLMAP) represents the median of the projections made by Value Line’s analysts of where the 1,700 widely followed stocks they closely monitor will be trading in three to five years’ time and, but for brief exceptions, the VLMAP…[hasn’t been this low] in many decades…In fact, you have to go all the way back to early 1969 to find another time in which the VLMAP spent as long a period [7 weeks] at 30% or below [as it is currently]. From then until the market’s December 1974 low, the Dow fell more than 40%.

When both Growth (VLMAP) and Value (Buffett) are cautious, then investors have to get especially wary. The combination of positive short-term indicators and analysis from Value Line, Buffett et al point to the same thing.

My base case scenario calls for stock prices to continue to grind upwards until mid-2014, at which point some unknown catalyst is likely to send equities downwards. Some time during Q2 and Q3, I would have to re-evaluate the macro conditions and re-position portfolios accordingly. 2014 is sounding like a good year to be selling in May and go away.

1. Grantham: No Market Bubble for a While – But It’s Coming!

I would think that we are probably in the slow build-up to something interesting – a badly overpriced market and bubble conditions. My personal guess is that the U.S. market, especially the non-blue chips, will work its way higher, perhaps by 20% to 30% in the next year or, more likely, two years, with the rest of the world including emerging market equities covering even more ground in at least a partial catch-up. Read More »

2. Stocks Will UNDERPERFORM Bonds Over Next 10 Year Period!

The stock market is likely to experience a 4-year overall market loss of -25%, followed by positive 9% average annual total returns for the S&P 500 over the subsequent 6-year period, which would compound to produce a 10-year total return averaging 2.3%. Read More »

3. These 2 Stock Market Metrics Make Me Feel Uneasy – What About You?

It’s been an amazing run in the stock market but…I start to feel a bit uneasy about things when I see all news reported as good news, because it either means the economy is getting better or more QE is coming. The fact, though, is that the market is just driving higher on what looks like sheer optimism of continued QE and little else. You can see this optimism in two indicators you’ll recognize. Read More »

4. 4 Clues That a Stock Market Collapse Is Coming

You might be well advised to keep your powder dry and your portfolio small – or even be tempted to sell everything and wait for the storm to blow over [given the 4 clues put forth in this article]. Read More »

5. Bernanke Has Created the Mother of ALL Stock Market Bubbles – Here’s Why

6. Bookmark This Article: The Stock Market Will Crash Within 6 Months!

Until recently, I have not used the term “stock market crash”. I do not take using this term lightly. It brings with it major repercussions. I am now breaking out this phrase because of the current state of the stock market. This stock market crash will occur within the next six months from today… The markets will fall within a combined day/few days a total of at least 20%. Bookmark this article. Read More »