more so than the following charts] on the incredible divergence in the U.S. economy and the European economy as it related to the extent of unemployment and industrial production in each region. Take a look. It’s truly amazing – truly tragic.

The above introductory comments are paraphrased excerpts from a post* by Cullen Roche (pragcap.com) entitled Europe vs USA: the Unemployment Divergence. 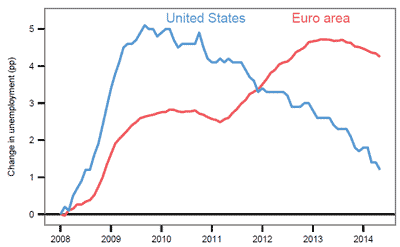 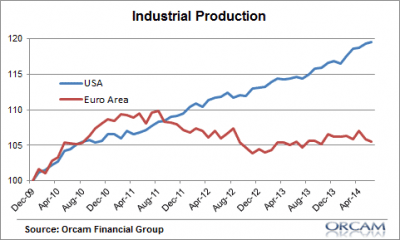 [In addition, as conveyed in an article** from e.businessinsider.com entitled This Is The Chart That’s Been Keeping Mario Draghi Up At Night]  inflation expectations in Europe have fallen off a cliff…

This chart, which comes to us from Frederik Ducrozet at Credit Agricole, is Draghi’s nightmare. 1. Europe’s Economic Recovery Has Run Out Of Steam! Here’s Why

Despite the European Central Bank’s periodic assurances to the contrary, Europe is well on its way to a lost economic decade and if European policymakers cannot shake themselves out of their present state of complacency we should brace ourselves for very rough going in the global financial markets when the U.S. Federal Reserve starts the process of normalizing interest rates. END_OF_DOCUMENT_TOKEN_TO_BE_REPLACED

2. Europe to Lurch From Frying Pan of Depression to Fire of High Inflation (& the U.S.?)

In the coming years, Europe appears set to lurch from the frying pan of depression to the fire of high inflation. When it does, the lessons of the Great Inflation [outlined in this article] will suddenly be all too pertinent. END_OF_DOCUMENT_TOKEN_TO_BE_REPLACED

With stocks at record highs and the U.S. economy improving, the European debt crisis seems like a distant memory….[While] Europe is no longer the market’s focal point, however, that doesn’t mean the euro zone’s financial problems have gone away. Read More »

4. A Summary of Graham Summers’ Articles About the Coming Collapse of the EU, the Euro and Europe’s Banking System

No one seems to understand what is happening in Europe the way Graham Summers does and, as such, his insightful articles keep appearing on this site as the best choice to convey the message. Below are introductory paragraphs to each of 12 articles with hyperlinks to each should you wish to read any in their entirety. END_OF_DOCUMENT_TOKEN_TO_BE_REPLACED

5.  Take Note: What’s Happening in Europe Could Cause MAJOR Crisis in U.S.!

Many people have been writing in to ask me, “why are you focusing on Europe so much? Who cares about Spain?” The short answer is that everyone should care about Spain. Spain could potentially take down the banking system in Europe, which would mean the U.S. facing a Financial Crisis at least on par with 2008. That is why Europe is a HUGE deal for everyone….We’re talking about systemic risk on a scale that would make 2008 look tiny in comparison. [Let me explain further.] Words: 674 END_OF_DOCUMENT_TOKEN_TO_BE_REPLACED

6. European Sovereign Debt Crisis to End in a Catastrophic, Painful, Epic Meltdown! Are You Financially Prepared?

I have a sinking suspicion – a feeling I just can’t shake – based on multiple fundamental, technical, and timing indicators….[that] the end is near. I’m not talking about some Mayan calendar apocalypse kind of thing….[but] a catastrophic, painful, epic meltdown-type endgame for this European sovereign debt crisis…[[Let me explain why I see that to be the eventual outcome.] Words: 810 END_OF_DOCUMENT_TOKEN_TO_BE_REPLACED

7. Big Money in Europe Scared for Good Reason – and You Should Be Too – Here’s Why

“The sense that you have in Europe is that the European political union and the European economic union are faced with some real dislocations. That isn’t to say that it necessarily won’t survive, but certainly from the point of view of the private wealth in Europe, the money managers for those families are quite concerned…. and quite frankly, they have good reason to be concerned…. we have the very real possibility of experiencing a psychotic break in the markets, such as we experienced in 2008.” END_OF_DOCUMENT_TOKEN_TO_BE_REPLACED

8. Graham Summers: This Is What Is REALLY Happening In Europe!

I’ve often been labeled as “Gloom and Doom” in the past, but the situation in Europe today is beyond anything I’ve ever seen before. It is highly likely that the EU will not exist in their current form by the end of the year. I realize some of this may sound overly dramatic but the following should give you an idea of how serious things are getting: [Words: 715] END_OF_DOCUMENT_TOKEN_TO_BE_REPLACED

9. Europe Heading Towards a Full-scale Disaster – Here’s Why

Europe is heading into a full-scale disaster [because,] you see, the debt problems in Europe are not simply related to Greece. They are SYSTEMIC. The European banking system’s leverage levels alone position Europe for a full-scale banking collapse on par with Lehman Brothers. Again, I’m talking about Europe’s ENTIRE banking system collapsing. This is not a question of “if,” it is a question of “when” and it will very likely happen before the end of 2012. Words: 750 END_OF_DOCUMENT_TOKEN_TO_BE_REPLACED

Share
Previous The 8 Major Companies, And Products, In the Booming Wearable Tech Sector
Next The Bare Facts On How Durex Sells Condoms in China (+2K Views)