Share
The U.S. Dollar’s status as a reserve currency seems to be a perennial concern for many people these days. I think

this concern is often dramatically overstated. Here’s why.
The above introduction by Cullen Roche (pragcap.com) are edited excerpts from his original article* entitled How Much Longer Will The Dollar Remain The Reserve Currency Of The World?.

Roche goes on to say in further edited excerpts:

[As you can see in the table below,]… no one maintains reserve currency status forever [and] that shouldn’t be remotely surprising. The global economy is dynamic and market shares shift….[and] today nations accumulate reserves of U.S. dollars today because the U.S. economy is the dominant player in global trade. 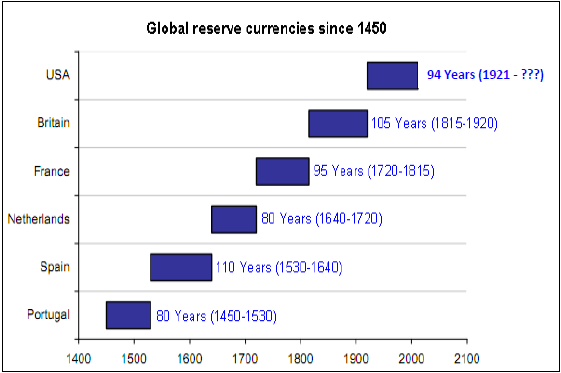 Of course, the U.S. Dollar isn’t the only currency that nations maintain reserves of…but since the USA produces 22% of all world output it happens to play a particularly special role in the global economy. By virtue of being the largest economy in the world the accumulation of U.S. dollar denominated financial assets happens to dominate the global financial system. It’s sort of like being the top market share producer of a particular product in a particular industry. Other entities accumulate your products because you’re the top producer – and that changes over time. Market shares change and regimes shift with the evolving economy.

Will the USA lose its reserve currency status at some point?

Will it cause everyone to suddenly ditch the dollar?

Will it be the end of the world?

It’s just a sign that market shares change and when you’re #1, well, there’s only one direction to go.

1. Would Major Sanctions Against Russia Hasten End of USD As World’s Reserve Currency?

Russia is a huge supplier of oil and gas — traded in US dollars — which gives it both leverage over near-term energy flows and, far more ominous for the U.S., the ability to threaten the dollar’s reign as the world’s reserve currency – and it’s taking some big, active steps towards that goal. Read More »

2. Shift From U.S. Dollar As World Reserve Currency Underway – What Will This Mean for America?

The American dollar will be overthrown…in as short a period as 5 to 10 years says one analyst while another believes it will happen as early as 2015, 2016 latest. Here’s why. Read More »

5. Will May 20th Go Down In History As the Day the U.S. “Petrodollar” Monopoly Was Finally Shattered?

The struggle over Ukraine has caused Russia to completely re-evaluate the financial relationship that it has with the United States. If it starts trading a lot of oil and natural gas for currencies other than the U.S. dollar, that will be a massive blow for the petrodollar, and it could end up dramatically – and negatively – impacting the average American’s current standard of living. Let me explain. Read More »

A major portion of the U.S. dollar’s valuation stems from its lock on the oil industry and if it loses its position as the global reserve currency the value of the dollar will decline and gold will rise. Iran’s migration to a non-dollar based international trade system is the testing of the waters of a non-USD regime…transition to a world in which the U.S. Dollar suddenly finds itself irrelvant. [Let me explain.] Words: 1200 END_OF_DOCUMENT_TOKEN_TO_BE_REPLACED

7. Is There a Viable Alternative to the Dollar as the Reserve Currency?

Within the recent retracement of the U.S. currency there has been endless speculation about the future role of the dollar as the world’s primary reserve currency. Moreover, there has even been conjecture that the dollar will no longer exist at some point in the near future but any case made for the vulnerability of the dollar falls short when it comes to naming alternatives. Words: 631 END_OF_DOCUMENT_TOKEN_TO_BE_REPLACED

What Will Happen If (and probably when) the U.S. Debt Bubble Bursts? (+18K Views)