What’s the Yield Curve? Why Should You Care About It?

Lorimer Wilson January 27, 2019 Comments Off on What’s the Yield Curve? Why Should You Care About It? 964 Views

“Whether you are a businessman or an ordinary citizen concerned about what’s going on in the world, the yield curve is something you should care about…[as it] is probably the single best indicator of an upcoming recession and where the markets are headed.”

Prepared by Lorimer Wilson, editor of munKNEE.com – Your KEY To Making Money! [Editor’s Note: This version* of the original article by Les Nemethy has been edited ([ ]), restructured and abridged (…) by 43% for a FASTER – and easier – read.]

“(a) Background and the theory of yield curves

…The bond yield curve below is the typical shape. The longer the term of the bond, the higher the yield, because, under normal circumstances, money is worth more today than tomorrow, as bond holders will typically look for a premium to postpone their spending that dollar today. 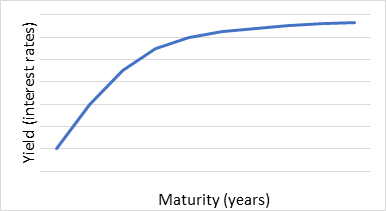 When investors perceive that a recession is approaching, there is a flight to quality: they typically flock to Government bonds, particularly U.S. Government bonds (the reserve currency of the world monetary system). In such times, investors are concerned about preserving the value of their holdings in the medium to long-term. Hence there is a so-called “compression” of the yield curve: the premium of long-term yields or interest rates over short term interest rates diminishes (as will be illustrated and discussed in more detail in Figure 5 below.

(b) How good a predictor of recession have yield curves been in the past?

Historically, the inverted bond yield curve has been a signal of an impending recession as it has accurately predicted every recession since mid 1960s, with only one false positive, in 1966. The 2007 inversion (figure 2), followed by the 2008 crisis is a perfect example of the strength of the yield curve as a predictor. 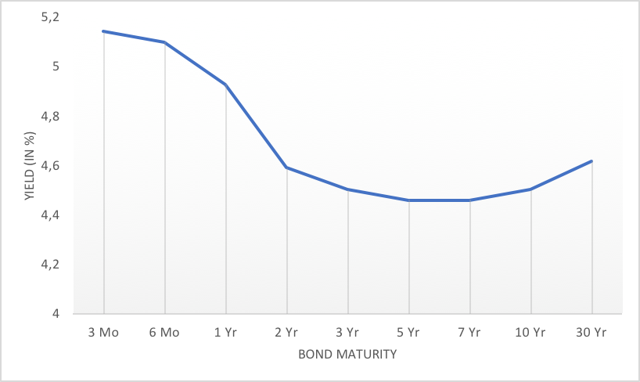 …The above yield curve was a harbinger of the 2008 crisis…

In a nutshell, over the past two years, there has been a so-called “flattening” of the yield curve. The chart below compares the yield curves as of January 1, 2016 to the curve as of August 27, 2018. 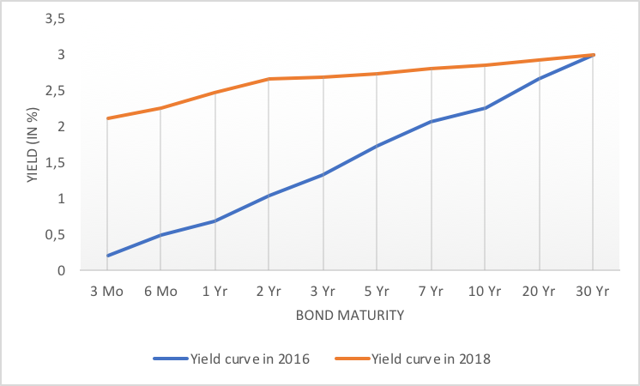 On December 7, 2018, the five year yield temporarily dipped below the three year yield. This created some market panic, with the DJIA tumbling 799 points that day. Some investors feared that this would also be a harbinger of a future recession. It should be noted that this was just a very brief inversion of the yield curve, over a very short period and that the curve has since normalized. Nevertheless, the flattening of the curve and this skittish inversion should warrant caution. The bull market will not last forever…

One can never know with certainty when the next recession will hit but the yield curve can provide some extremely valuable insights.”

Share
Previous Canada Has the Highest Debt Of Any Country In the World! It’s Now Time To Pay the Piper
Next Great Profit Expansion Has Ended – Stocks Are Doomed As A Result!