The Silver Bull Argument Has Flaws – Here’s Why (+2K Views)

extremely bullish on silver. They talk about silver returning all the way to the pre-20th century 15:1 ratio to gold, or even to 10:1. If you really think this is going to happen, you should just go and put most of your money into silver and silver miners but I don’t recommend this. This article discusses some of the key factors that can affect the relative performance of silver versus gold from a short-, medium- and long-term view.

The comments above and below are excerpts from an article by Geoffrey Caveney (drstrangemarket.squarespace.com) which has been edited ([ ]) and abridged (…) to provide a faster and easier read.

For many precious metal investors, silver…looks like a sure thing. The gold/silver ratio has been at historically high levels for years, so a simple reversion to a more normal ratio (say 50:1) would mean silver would outperform gold by a substantial margin. Many people observe this and think, “Why not just put my precious metals investments into silver instead of gold? Eventually, the ratio will return to normal and I’ll do better with silver.”

Well, this may happen, but there’s no guarantee it will. More likely, gold may continue to outperform silver for a significant period of time (think $2,000 gold and $25 silver), and only after that will the ratio revert to a more normal level.

Silver bulls often emphasize the supply side of the market: vast amounts of gold are stored as wealth, while a lot of silver is not stored but used up in industrial applications, so the global supply of silver, according to this argument, is very limited – and low supply should be very bullish for the price.

The real key question is demand:

The first point about demand is obvious, but it is often neglected in analyses of the silver price: The demand for gold is, and always has been, VASTLY greater than the demand for silver. This is an obvious and indisputable fact that follows directly from the price and supply:

We can see the same dynamic with more obscure precious metals that are actually rarer and in shorter supply than gold, but that still have market prices lower than gold: palladium, for example, as well as iridium and rhodium. Why? Because gold as a store of value and wealth has a tradition lasting many thousands of years that is well known to every person in every civilization on Earth. If a man in India tried to give his fiancée iridium jewelry instead of gold, and started talking about crustal ratios and global supply, he probably wouldn’t get very far. That is the meaning of the value of gold.

A cautionary tale: at the peak of the metals and commodities boom before the 2008 financial crisis, the price of rhodium went as high as $10,000 per ounce. It is now back to $650 per ounce: 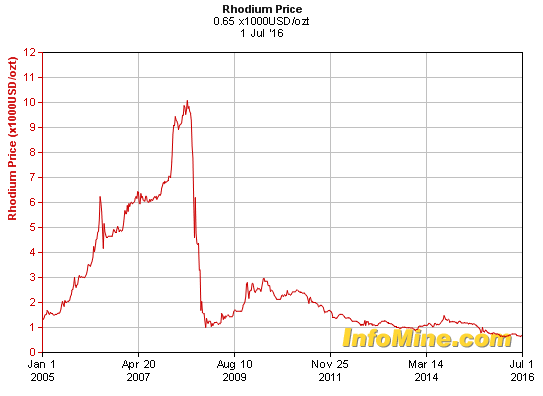 The chart above should serve as a stark warning to anyone investing in a commodity based on rarity and supply, but ignoring demand.

Silver’s hybrid demand creates a particular risk that is especially important to understand in a situation like the present:

At certain extremely critical moments, gold price will rise against the market, while the price of silver will be held down by the market so, if concern about overvalued stocks and a market downturn is an aspect of your interest in precious metals investments, be careful about investing in silver.

Will Investment Demand for Silver Boom?

The silver bull case argues that as the gold price rises and fewer people can afford to buy gold, more people will turn to buying silver as a more affordable way to own precious metals to preserve their wealth. Unfortunately, there is one big hole in that argument: In the future, the people who can’t afford to buy gold may not have any wealth to preserve at all.

I don’t see a thriving market for silver coins and bars as an investment vehicle in a world like this. In fact, sadly, many of the middle-class people who have been buying silver coins and bars in recent years, planning to save them as investments, may be forced to sell them in the next economic crisis as their personal financial situation worsens. This could actually flood the market for silver coins, increasing the supply in circulation and holding down the silver price. I’m not saying this is a certainty. I’m just saying this is an example of the kind of development that could arise and present a risk to the investment thesis for silver.

Sooner or later, in the depths of the next crisis and recession, the gold/silver ratio will reach a limit and silver will rebound from there. If some struggling people have to unload their silver coins, some savvy investors will snap them up and make a lot of money on the ensuing silver price rebound.

I just hope that you, dear readers, are among the savvy ones buying up silver at a discount at the right time. To be in that position, I recommend you focus your precious metal investments on gold and gold miners at the present time. Wait until the middle of the next recession to look for an opportunity to invest in silver and other metals which will be undervalued (in comparison to gold) at that time.