The Gold-Silver Ratio: Here’s What It Indicates Could Happen Soon

The above comments, and those below, have been edited by munKNEE.com (Your Key to Making Money!) for the sake of clarity [] and brevity (…) to provide a fast and easy read and have been excerpted from an article* by Itinerant as posted on SeekingAlpha.com under the original title A Silver Lining For The Gold Price? which can be read in its entirety HERE.

Gold Price in US Dollars data by YCharts 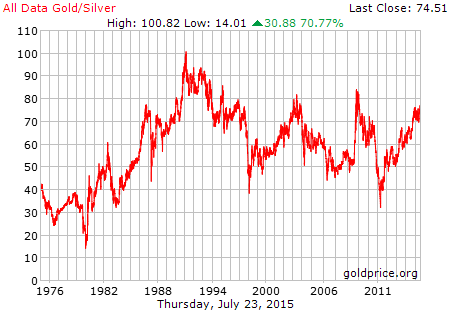 The Gold-Silver Ratio Has Bottomed

We observe that the gold-silver ratio bottomed out when the silver and gold prices hit their most recent tops in 2011, and has been rising steadily since then. The chart below shows the gold price (black line) and the gold-silver ratio (red line) in more detail for this latest bear market period. The green lines are forming an ascending triangle pattern with outlines provided by the long-term rising trend line, and resistance at around 75. [Sept. 2 update: Resistance has been broken. Gold:Silver ratio as of today is 77.8.]

From a technical point of view a sharp break-out from the forming ascending triangle can be expected in the not too distant future, quite probably to the upside and taking the gold-silver ratio into the 80+ region. This would represent the upper end of the long-term range for the gold-silver ratio, from which the trend has reversed quite sharply on several occasions before. Such a scenario would entail silver prices to under-perform gold prices for one last time, before the onset of a role reversal where silver should outperform gold — which would be the typical symptom of a precious metals rally.

In terms of fundamental factors we believe that industry demand for silver will continue to grow, and we foresee that it will continue to put a floor under the silver price in the longer term. Ultimately, the growing proportion of silver being consumed in industrial applications may well lead to a de-coupling of gold and silver prices in the future.

Based on various considerations, including our observations of the gold-silver ratio, we currently favor a scenario of final gold price capitulation which would quite probably drag the silver price down with it. The gold-silver ratio might well head sharply higher to the 80+ region during this capitulation phase completing its journey to the upper end of its long-term range.

Given the fact that a) the historical movement of silver is 90 – 98% correlated with gold-silver gold, b) silver is currently greatly undervalued relative to its average long-term historical relationship with gold and c) many analysts predict a parabolic rise in the price of gold over the next 5 years it is realistic to expect that silver will also escalate dramatically in price – but by how much? This article applies the historical silver to gold ratios to come up with a range of prices based on specific price levels for gold being reached.

The continuing upward trend in the gold/silver ratio (continuing weakness in silver relative to gold) is not in conflict with the view that gold commenced a cyclical bull market last December and is working its way through a lengthy basing process. Here are the details.

3. What Do Silver:Gold Ratio, Volatility & “Bear’s Eye View” Analyses Suggest for the Future Price of Silver?

I believe that the Silver to Gold Ratio has peaked, making silver a compelling bargain relative to gold. From today’s vantage point it is difficult believing that the price of silver could ever equal or exceed the price of gold but, when one considers the possibilities, there are many good reasons to accumulate as much silver as possible at today’s prices.

Should you buy & hold your gold or silver or switch back and forth depending on the gold/silver ratio? This article examines 3 scenarios and identifies certain rules that should be followed to make the most of the ups and downs of the gold/silver ratio to substantially increase your holdings over time.

6. Silver’s Expected Outperformance Will Cause Gold:Silver Ratio to Decline

[A]s we’ve consistently seen, when financial conditions get particularly rough, gold and silver lose their safe-haven appeal [but their]…prices may have already struck bottom and, [al]though we don’t expect them to run away to the upside, now may be the time for long-term investors to accumulate positions. That said, what should an investor buy: gold or silver? That is always an interesting question, but especially so during periods of rapid price movements such as now. [Below I analyze the gold/silver ratio and come up with the answer.] Words: 760

Share
Previous U.S. & Canada Don’t Rank In the Top 5 “Most Free Countries” – Which Countries Do?
Next Biggest Speculative Bubble Ever Will Begin To Implode This Autumn. Got Gold? (+3K Views)