[A]s we’ve consistently seen, when financial conditions get particularly rough, gold and silver lose their safe-haven appeal [but their]…prices may have already struck bottom and, [al]though we don’t expect them to run away to the upside, now may be the time for long-term investors to accumulate positions. That said, what should an investor buy: gold or silver? That is always an interesting question, but especially so during periods of rapid price movements such as now. [Below I analyze the gold/silver ratio and come up with the answer.] Words: 760

So says the Hard Assets Investor (www.hardassetsinvestor.com)  in edited excerpts from an article* which Lorimer Wilson, editor of www.munKNEE.com (Your Key to Making Money!), has further edited ([ ]), abridged (…) and reformatted below for the sake of clarity and brevity to ensure a fast and easy read. The author’s views and conclusions are unaltered and no personal comments have been included to maintain the integrity of the original article. Please note that this paragraph must be included in any article re-posting to avoid copyright infringement.
The article goes on to say:
Both [gold and silver] hit record highs earlier this year, at $1921.15/oz and $49.79, respectively. [Al]though the timing of the highs was a bit different — silver peaked in April, while gold peaked in early September — investors bought the two for similar reasons, i.e. to hedge against inflation and sovereign debt fears.

When prices were falling, silver got hit harder [than gold because]…it has a much more significant industrial-demand component [than] that [of] gold… – 46% vs. 11%, [respectively]. [As such], when economic concerns are prevalent as they have been recently, it’s no surprise that silver would fall more. On the other hand, when economic conditions improve, silver typically outperforms. This has been the paradigm over the past 20 years. The best way to see this is through the gold/silver ratio, which measures the relative value of the two precious metals. The higher the gold/silver ratio, the more expensive gold is relative to silver. Conversely, the lower the ratio, the more expensive silver is relative to gold. 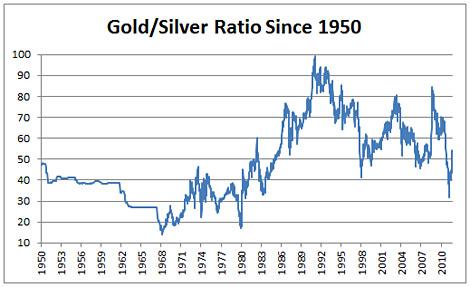 From 1980 to 1990, the ratio surged to 100 as the sector plunged from their record highs amid a taming of inflation and central bank selling of gold.

The period from 1990 to 2000 saw a normalization in the ratio as silver prices ticked up a bit. Below is the gold/silver ratio since 1990, when the ratio peaked close to 100. 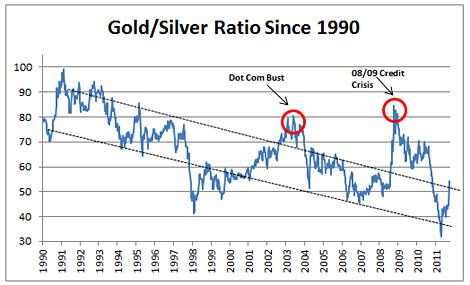 2000 to 2011 is the latest period in which the ratio has trended significantly lower, as both gold and silver prices have rallied sharply [- but silver more so than gold].

The trend has been gradually, but consistently, lower. The only instance when the ratio deviated significantly from the overall downtrend was in 2008/2009 during the depths of the financial crisis in those years. Another peak corresponded with the dot-com bust during the early part of the last decade. 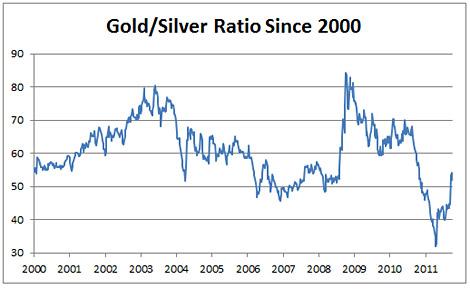 Many investors believe that the gold/silver ratio will continue to decline over the next decade as both gold and silver prices appreciate, with the latter rising more swiftly. Ultimately, the ratio may fall to levels below 20, where it last stood during 1980, when inflation ran rampant in the United States and other major economies.

While inflation isn’t yet at the double-digit levels witnessed back then, the argument is that the enormous debt burdens facing many countries will be monetized by central banks, eventually leading to inflation. We’ve already seen the beginnings of this to some extent. The quantitative easing programs in the U.S. and the U.K. have led to the monetization of more than $2 trillion worth of sovereign debt, while headline inflation figures are well above target ranges in both countries. At the same time, recent central bank buying has legitimized gold and silver as monetary alternatives to traditional fiat currencies. Meanwhile, robust demand growth from investors and consumers in emerging markets such as China and India is a bullish catalyst that wasn’t evident during the last major precious metals bull market. All of these factors bode well for continued gains in gold and silver prices, and a continued decline in the gold/silver ratio.

Looking at more recent price action, the ratio last stood at [around] 52,…[which] is above the upper trend line and thus signals that silver may be a relative bargain compared to gold. Earlier this year, the ratio hit a 31-year low near 32.

The majority of analysts are now of the opinion that gold will reach a parabolic peak price somewhere in excess of $5,000 per troy ounce in the next few years. Given the fact that the historical movement of silver is 90 – 95% correlated with that of gold suggests that a much higher price for silver can also be anticipated. Couple that with the fact that silver is currently greatly undervalued relative to its average long-term historical relationship with gold and silver could escalate dramatically in price over the next few years. How much? This article takes a look at historical gold:silver ratios and what attaining certain relationships would mean for the price of silver should specific price levels for gold be realized. Words: 1411

We have a financial system that’s on the edge of a cliff here. People have to be in precious metals if they want to protect themselves. Everyone who’s an investor has money. They have it invested in some paper instrument and when they realise they have a problem with their money in a bank or owning some government note the demand for gold could just be overwhelming! It could be parabolic all of a sudden. Currently, only o.75% of the world’s financial assets are in gold so just imagine what a 5% to 10% interest in gold would mean for its price. On top of that, I believe that silver will get back into a 16:1 ratio to gold in three to five years for sure so that means that silver is going to have a great upside potential. Got gold? Better yet, got silver? Words: 5169

3. Buy Silver Instead of Gold! Here are 10 Reasons Why

We are at the beginning of a major shift out of paper assets into real assets [and] those that are starting to come to this revelation have no real understanding what they are doing when they are buying gold…[they just want] to get out of paper assets. I bought gold as a gut reaction [but] the more I learned about silver, [however,] the more I realized that silver was the smart decision. [Let me explain.] Words: 2190

4. Update: Why $300+ Silver is a Realistic Future Peak PriceSilver escalated in price by 81.1% in the 12 months ending June 30th, 2011 compared to gold’s 19.3%. As such the gold:silver ratio fell from 67: 1 to 44: 1 over that period. This is still way out of whack with the long-term historical relationship between the two precious metals and begs the question: “Is now the perfect time to buy silver instead of the much more expensive gold metal?” Words: 1490
5. Why Silver Provides Much Greater Upside Potential than Gold The opportunities expected to arise from investing in silver now are even more pronounced than those of gold. [Let me explain why that is the case.] Words: 1367