The Fiscal Cliff: What We Think Will Happen and What Investors Should Do (+2K Views)

Share
Unless the government acts quickly, it is probable that the term “fiscal cliff” will become a household phrase over the next few months. Unfortunately, this is reminiscent of the budget ceiling crisis about a year ago. In this report we will explain what the cliff is, discuss the worst case scenario, and determine what, if anything, you should do about it. Words: 1436
So says John P. Cogswell in edited excerpts from his original article* as posted on Seeking Alpha.

Cogswell goes on to say, in part:

What is the fiscal cliff?

Fiscal cliff is a term that describes the combination of tax increases and spending cuts that are automatically set to take effect at the end of this year. The likely impact of this combination of actions will be to reduce the budget deficit by $604 billion over the next year. Although reducing a budget deficit might intuitively sound like a positive event, there is a good argument that if the measures are too extreme, it could hurt our already lackluster economy.

As a preface, let’s take a step back and dissect the size of our economy relative to total debt and spending deficit. The purpose of this exercise is to bring some clarity to the mind-bogglingly large numbers often cited by the financial media when discussing economics. Thinking in terms of billions and trillions is not something most do on a daily basis. For simplicity, we will use percentages where we can and do a little bit of rounding with the large numbers. This should make the details easier to grasp and remember.

The generally accepted method of valuing an economy is GDP (Gross Domestic Product). GDP is the value of all final goods and services produced in a country. Some think of it as the income of a country.

Regarding the budget for 2012, the Congressional Budget Office (CBO) assumes total spending will be about $3.6 trillion dollars. However, revenues (taxes) will only be about $2.5 trillion. The $1.1 trillion in tax revenues is a shortfall of about 32% of total spending.

Our total debt, which is a culmination of past budget deficits, is about $15.5 trillion and is very close to 100% of the size of our economy as measured by GDP. Below is a chart (Chart 1) from the Federal Reserve showing how much our public debt has grown over time. Please note the obvious increase in steepness since the early 2000s. 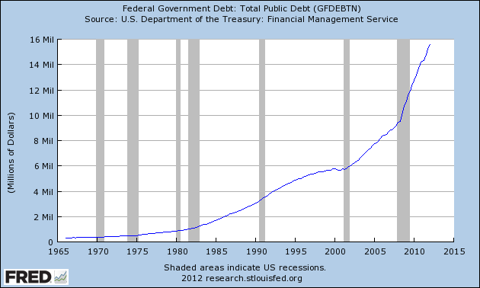 It is true that, as our debt has grown, so has the economy (GDP). Unfortunately, the rate of growth has not been the same. As evidence, please see Chart 2 below from the Fed, which depicts debt as a percentage of GDP. The debt has clearly grown at a higher rate than GDP. 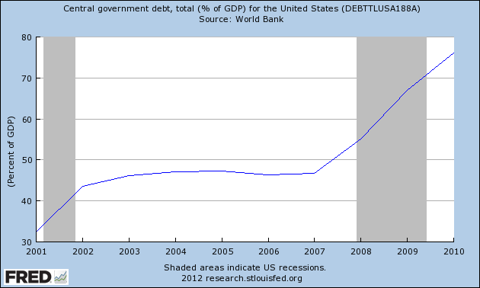 The details of the estimated $607 billion deficit reduction (fiscal cliff) are:

Currently the debt ceiling is set at $16.394 trillion. The CBO projects this level could be reached by early 2013. If the Government is unable to reach a compromise, this will most likely have the same type of negative impact on the market as it did in August 2011. For those of you who do not remember, this was not a pleasant environment for many investors….

Now that we have explained what the fiscal cliff is, let’s evaluate what kind of impact it could have on economies and markets throughout the world. To be very clear, we are concerned that many people do not understand exactly how steep the fiscal cliff could be under a worst case scenario.

Simply reducing GDP ($16 trillion) by the combination of estimated tax increases and spending cuts ($607 billion) is not the optimal way to do this scenario analysis. However, it is a pretty good start. The reason a simple approach is not perfect is because of the interconnection between the different variables involved. For example, if higher tax rates lead to higher unemployment it is likely GDP will be lower than it would have been otherwise. Therefore, GDP could be reduced by more than 3.8% (607/1600). In any case, if the average GDP growth rate is around 2.5% a year, it is easy to see how this fast approaching cliff can lead to recession.

We are not alone in our concern of a recession. The CBO, a bi-partisan group, has projected negative GDP growth should our Government drive us right off the cliff. In fact, from our vantage point, both Republicans and Democrats have roughly the same opinion on the negative impact this could have on our economy. The difference is in the fix:

Assuming these deep routed philosophical differences are unlikely to change any time soon, we will have to keep our fingers crossed for some sort of compromise. Ideally, the compromise will not come at the last minute.

What We Think Will Happen and What Investors Should Do

We are never so arrogant or foolish enough to believe that we, or anyone else, can predict the future. However, at its core, portfolio management is about assigning probabilities to future events and allocating assets accordingly.

Our base case scenario is that a compromise will be reached sometime between September and early 2013. Obviously, the sooner the better but the most likely scenario will be at the tail end of the year. Specifically, we think:

We believe that as we approach November, the frequency with which the press discusses the fiscal cliff will increase. This will no doubt lead to higher stress and volatility levels. As usual, most of this potential volatility will be unwarranted and emotional. On the other hand, some volatility will be justified.

Given the elevated probability of a higher capital gains tax rate next year:

The above is not a recommendation for long term investors to “time the market” and move into money markets, etc. We are simply suggesting that it would be prudent to take advantage of the profits we have experienced so far this year, and take some money off the table if you know you are going to need it.

*http://seekingalpha.com/article/813921-this-fiscal-cliff-might-be-steeper-than-you-think (To access the above article please copy the URL and paste it into your browser.)

2. The Fiscal Cliff: Everything You Need To Know About It & Its Implications

The U.S. federal government is scheduled to implement a fiscal tightening of unprecedented severity (approx. 5% of GDP) at the start of 2013. The last time a tightening of such proportions occurred (3% of GDP in 1969) it presaged a recession. Thus, unless mitigated by an act of Congress, we expect the fiscal cliff would lead the U.S. into a recession in 2013. Below, in 26 charts, we examine all aspects of the impending crisis to gauge its potential impact on the credit markets and, by extension, our strategic investment recommendations.

This short video – on the unsustainability of government spending – should be watched by everyone, including those not yet old enough to vote. It should be shown in every high school and college classroom. Anyone that cannot understand this presentation should not be allowed out without a guardian.

4. Mohamed A. El-Erian: Bad Economics Led to Bad Politics and Will Further Undermine Economy Unless….

The warning bells are ringing, and they are ringing loudly. We’ve already allowed bad economics to lead to bad politics. Now, it’s high time to put a stop to the cycle where bad politics undermines an already fragile economy. [Let me explain.] Words: 1085

5. Don’t Ignore the Coming Financial Storm – It IS Coming and Here’s How to Get Prepared

6. Regardless of Who Wins in November the U.S. Is Going Over the Financial Cliff! It’s Just a Matter of Time – Here’s Why

Share
Previous A Summary of Graham Summers’ Articles About the Coming Collapse of the EU, the Euro and Europe’s Banking System (+2K Views)
Next A Look At the History of the Rise and Fall of the Gold Standard and Other Exchange Rates