Silver’s “real deal” rally will happen when people run to silver for its monetary benefits. That is not really

happening yet, in a big way, but it is about to – very soon. Money is what silver is, and it is this that will drive the coming spectacular silver rally.

Moolman goes on to say in further edited excerpts:

The relationship between the Dow and silver has been very consistent during the last 100 years. After each of the major Dow peaks (real, not necessarily nominal peaks), we eventually had a major bottom in silver.

Below, is a 100-year inflation-adjusted Dow chart: 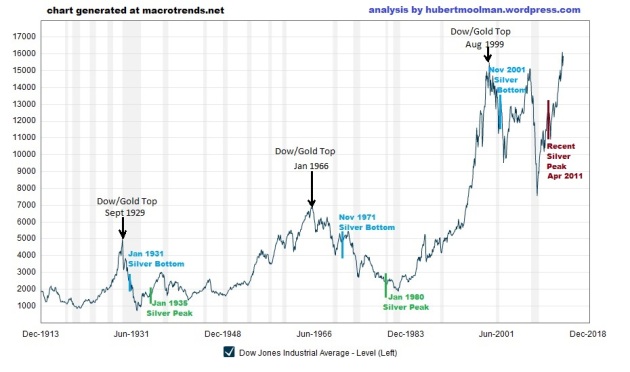 The Dow’s Performance During Silver Rallies

1. In September, 1929, the Dow peaked in terms of U.S. dollars, as well as in terms of gold ounces (real terms). After about 1 year and 4 months, silver made a significant bottom. While the Dow continued to fall for most of the time, silver rallied until it peaked in January of 1935. At silver’s peak, the Dow was about 30% lower in real terms than what it was at silver’s bottom.

2. Again, in January 1966, the Dow peaked in real terms. After about 5 years and 10 months, silver made a significant bottom. While the Dow continued to fall for most of the time, silver rallied until it peaked in January of 1980. At silver’s peak, the Dow was about 55% lower than it was at silver’s bottom.

3. In 1999, the Dow once more peaked in real terms, and after 2 years and 3 months, silver again made a significant bottom. However, over the period from the silver bottom to the peak in April 2011, The Dow actually went sideways (actually slightly higher) as illustrated in the following chart: 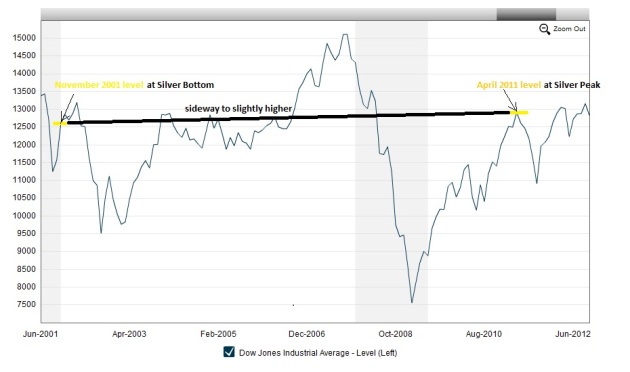 The April 2011 high in silver is not the peak for this bull market. Why? Because silver stands in direct opposition to paper assets like the stocks that are part of the Dow and, therefore, when silver has a “real deal” rally, paper assets like the Dow will lose significant value over the same time. Why? Because the debt-based monetary system does what I call a “mirror-effect”, whereby silver (and gold) is pushed down in value to a similar extent as to which paper assets such as general stocks are pushed up in value. When the rally of the paper assets eventually runs out of steam, then there is a big push for silver and gold.

Silver’s “real deal” rally will happen when people run to silver for its monetary benefits. That is not really happening yet, in a big way, but it is about to – very soon. Money is what silver is, and it is this that will drive the coming spectacular silver rally.

A look at the Dow chart again (below), shows that the silver peaks of the 70s and 30s occurred when the Dow was trading closer to the lower levels of its range but, currently, the Dow is trading at all-time high levels. 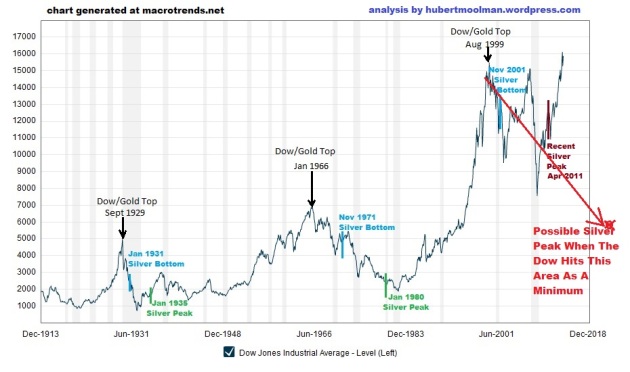 Which will it be – a long wait for a spike in silver or will it be soon? It all depends on whether this current Dow rally is real or fake. I think it’s fake. [Express your views in the Comment Section at the bottom of the page.]

*https://hubertmoolman.wordpress.com/2014/04/13/silver-price-forecast-2014-silvers-ultimate-rally-when-paper-assets-collapse/ (For more of this kind of analysis on silver and gold, and why I think that the Dow’s current rally is fake, you are welcome to subscribe to my premium service. I have also recently completed a Long-term Silver Fractal Analysis Report.)

3. Silver Has the Potential to Increase 4-Fold From Today’s Price – Here’s Why

4. Massive Debt Levels Will Push Silver To $150 And Beyond

Share
Previous Are Stock Market & U.S. Dollar About to Crash? Will Gold Be the Major Benefactor? (3K Views)
Next Gold Stocks Could Jump 100% in the Coming Year – Here’s Why (+2K Views)