Silver: 5 Forces That Should Help Polish Off the Tarnish & Propel It Higher (+2K Views)

Edited by: munKNEE.com – Your Key to Making Money!

signals in recent months suggest that it may not be long before silver begins to shine once again. [This article identifies 5 such signals and/or reasons why that may well be the case.] Words: 643; Charts: 2

Parnell goes on to say, in part:

Silver has been a most rewarding investment over the past decade with an annualized rate of return of roughly +17% over this time period. Not coincidentally, the bull market in silver began not long after U.S. fiscal and monetary policy makers shifted to a weak dollar policy in early 2002, and dramatically picked up steam once policy makers began flooding the financial system with liquidity following the outbreak of the financial crisis in 2008.

Looking forward, the fundamental case for owning silver is as strong as ever. Silver continues to serve as an alternative currency in that it provides a hard asset store of value for those investors seeking protection against the inflationary effects of currency debasement as well as the threat of crisis. [Also,] given the fact that the U.S. Federal Reserve stands ready to explode their balance sheet by more than $1 trillion in the coming year alone in an environment where the economic and geopolitical environment remains highly unstable, the appeal of owning silver should be as strong as ever.

[That being said, however,]…, silver’s performance since spring 2011 has been lackluster at best and disappointing at worst. Overall, silver has lost -34% of its value since peaking at the very end of April 2011. While this recent performance has been trying for those that remain positive on owning the white metal in the current environment, the good news is that this recent pullback represents a healthy consolidation in an ongoing uptrend. 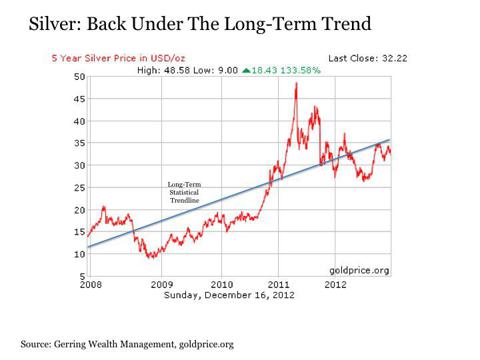 A variety of forces continue to build that should help propel the next move higher in silver, namely:

1. The silver price is now starting from a sounder base. When silver spiked toward $50 per ounce back in April 2011, it soared well beyond its long-term trendline dating back to the beginning of its current bull market. Following its recent price consolidation it is trading at levels that are now below this same trendline. 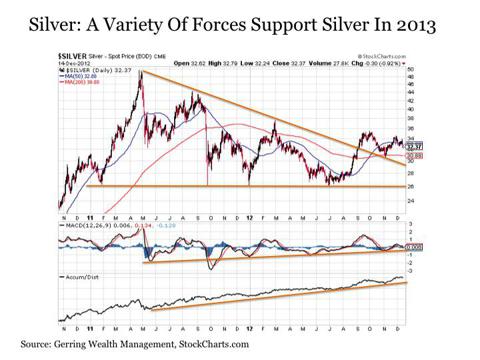 2. Silver is setting up increasingly well from a technical perspective as we enter the new year. Starting in early September 2012, not long after breaking out above its 200-day moving average and just ahead of the Fed’s launch of QE3, silver broke decisively above the downward sloping trendline that began at its peak in April 2011. Since that time, silver has successfully held support both at the same downward sloping trendline as well as the 200-day moving average.

3. The momentum behind the silver price has been gradually building, as we have seen higher lows in momentum readings since May 2011, with the sole exception being the sharp Operation Twist induced sell-off in September 2011.

4. The steady increase in the cumulative flow of money into silver over the past two years, suggesting that upward pressure on the silver price continues to build despite the recent consolidation phase.

[As a result of the above 4]…reasons, I am bullish on silver for the coming year [and reason #5 is that,]…with over $1 trillion set to come off of the Fed printing presses next year, silver has shown itself to be a favorite final destination for these liquidity flows and is set up well for it again in the future….

*http://seekingalpha.com/article/1069651-silver-polishing-off-the-tarnish (This post is for information purposes only. There are risks involved with investing including loss of principal. Gerring Wealth Management (GWM) makes no explicit or implicit guarantee with respect to performance or the outcome of any investment or projections made by GWM. There is no guarantee that the goals of the strategies discussed by GWM will be met.)

According to David Morgan 2013 will be a bullish year in which a new leg up will start with gold going up 10% to 20% and silver a good 30%. That leg up is starting right now, although we probably will not see a substantial acceleration in the leg up like we saw in the first part of 2011 but, obviously, as soon as $50 is crossed an acceleration can be expected. [Morgan explains his position in article excerpts below.] Words: 912

Savers will not stand idly by and watch their savings get wiped out by taxes and inflation….[which] is good news for investors who buy and hold commodity assets today – and it’s also a stark reminder to not be fooled by the short-term head fakes that might make it look like the commodity bull is over. Stay the course – the biggest profits are yet to come. [Here’s why.] Words: 405

4. Which Gold and Silver Assets (and How Much) Should You Own?

5. It is Imperative to Invest in Physical Gold and/or Silver NOW – Here’s Why

7. Why You Should Now Invest in Silver vs. Gold

The price of silver is going to go much, much higher – much higher – over the next decade [relative to gold according to Jim Rogers and I concur. Below are 5 solid reasons why I believe that is the case.] Words: 767

8. Gold:Silver Ratio Suggests MUCH Higher Price of Silver in Next Few Years

Share
Previous Oxymoronically, the Biggest Risk to the U.S. Economy & Dollar Might Well Be Economic Growth! Here's Why
Next Bull Markets Always End With a Bang, Not a Whimper, So Gold’s Run Should Have More Legs (+2K Views)