Do you own enough gold and silver for what lies ahead? If 10% of your total 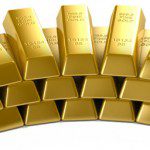 investable assets (i.e., excluding equity in your primary residence) aren’t held in various forms of gold and silver, we…think your portfolio is at risk. Here’s why. Words: 625

So says Jeff Clark (www.caseyresearch.com) in edited excerpts from his original article* which Lorimer Wilson, editor of www.munKNEE.com (Your Key to Making Money!), has edited further below for length and clarity – see Editor’s Note at the bottom of the page. (This paragraph must be included in any article re-posting to avoid copyright infringement.)

Clark goes on to say, in part:

Most investors fall into one of two categories: those that hold an abundance of gold and silver (which tends to be physical forms only), and those with little or none. While both groups need to diversify, I’m a little more concerned about the second group. Here’s why.

Gold’s Value vs. the Dollar

Regardless of what you think will happen over the remainder of this decade, one thing seems virtually certain: the value of paper money will be affected, perhaps dramatically. Even if the economy slips into deflation, the deflation wouldn’t last long. A panicked Fed would print to the max and set off a wild rise in prices. This is why we’re convinced currency dilution will not only continue but accelerate.

Let’s take a look at what’s happened so far with the value of our currency vs. gold, after accounting for the loss in purchasing power.

[As you can see in the chart above,] both the US and Canadian dollar, after adjusting for their respective CPIs, have lost about a quarter of their purchasing power just since 2000. Concurrently, gold has increased dramatically in buying power, far outpacing the effects of inflation. This is the core reason why I’m convinced we should hold our savings in gold and silver instead of dollars.

Many…believe economic, monetary, and fiscal pressures could come to a head this year. The massive build-up of global debt, continued reckless deficit spending, and the lack of sound political leadership to reverse either trend point to a potentially ugly tipping point. What happens to our investments if we enter another recession or – gulp – a depression? [Below is] an updated snapshot of the gold price during each recession since 1955.

Clearly, [as you can ascertain from the above graphics,] one should not assume that gold will perform poorly during a recession. Even in the crash of 2008, gold still ended the year with a 5% gain. With the amount of currency dilution we’ve undergone since that time, it seems more likely gold will rise in any economic contraction than fall. Indeed, if the response of government to a recession is more money printing, precious metals will be a critical asset to have in your possession. Even if the gold price ends up flat or down this year, the CPI won’t. Gold’s enduring purchasing power is why we hold the metal.

In spite of the debilitating 1970s that suffered from stagflation, price controls, three recessions, and the Vietnam war, [stocks of] gold producers rose over 600% while the S&P was basically flat – and that includes a roughly 65% fire-sale correction, much like we saw in 2008. To be clear, gold and silver stocks won’t be immune to selloffs if a recession or worse temporarily clobbers our industry but in the end, we’re convinced they will prevail.

Don’t lose patience with, or confidence in, your gold holdings. What happens to the price over any short period of time is only one chapter in the book of this bull market, and we think you’ll be happy by the time that last chapter is written.

[Editor’s Note: The above article has been has edited ([ ]), abridged, and reformatted (including the title, some sub-titles and bold/italics emphases) for the sake of clarity and brevity to ensure a fast and easy read. The article’s views and conclusions are unaltered and no personal comments have been included to maintain the integrity of the original article.]

1. Don’t Laugh – Invest At Least 65% of Your Portfolio In Precious Metals!

There is such a “fear of gold” amongst most people that it must be due to statist indoctrination and propaganda because it makes no rational sense to have such a fear of such a time tested and true store of wealth. After all, we are talking about time tested and true money – the only money that has lasted for thousands of years and is still fully accepted worldwide as a store of wealth….What would you rather hold “for eternity” gold [or] US dollars [which are nothing more than] a paper debt obligation of a bankrupt nation state? Words: 450

2. Gold Bugs: Here’s How to Make the Most of the Continuing Bull Market in Gold!

3. Get Positioned: “Gold Rush” Will Cause Gold Stocks to SOAR – Here’s Why

5. Believe It or Not: Only 1 Fund Has Outperformed Physical Gold Since 2007!

Out of the 7,500 separate mutual funds available, and with 22,000 shares classes to choose from, only 1 fund – just ONE fund – actually managed to achieve a greater percentage return than gold bullion since the alarm bells rang out at the turn of 2007! [That being said, are you still one of the 99% of investors who, for whatever reason (are you foolishly listening to the “advice” provided by your stock broker/securities salesman going under the guise of a financial “advisor”), is still without any physical gold or silver?] Words: 395

6. Your Portfolio Isn’t Adequately Diversified Without 7-15% in Precious Metals – Here’s Why

7. Governments Will Want – Will NEED – Much Higher Gold Prices! Here’s Why

Dow 13,000 is a meaningless number! [True] the DJIA index has touched that number for the first time since 2008 but, when priced in gold, it has actually declined. Let me explain. Words: 245

In my opinion, the greatest threat to long-term and retirement investors is the wealth-destroying triple combination of monetary inflation, asset deflation, and inflation taxes. Fully understanding [these factors] is absolutely essential for financial survival because history shows us quite clearly that when all three of these major wealth destroyers are working together in the real world then conventional investing methods cannot withstand the destruction of investor wealth that occurs. [Let me explain why, then, your past and future stock market gains actually have been, and will continue to be, absolutely nothing more than a mirage – a cruel illusion that has and will continue to only benefit our governments – unless you develop a drastic out-of-the-box investment strategy that is radically different from anything that currently exists (or is in the public domain).] Words: 3456

11. It is Imperative to Invest in Physical Gold and/or Silver NOW – Here’s Why

Asset allocation is one of the most crucial aspects of building a diversified and sustainable portfolio that not only preserves and grows wealth, but also weathers the twists and turns that ever-changing market conditions can throw at it. However, while the average [financial] advisor or investor spends a great deal of time carefully analyzing and picking the right stocks or sectors, the basic and primary task of asset allocation is often overlooked. [According to research by both Wainwright Economics and Ibbotson Associates and the current Dow:gold ratio, allocating a portion of one’s portfolio to gold and/or silver and/or platinum is imperative to protect and grow one’s financial assets. Let me explain.] Words: 1060

12. Protect Your Portfolio By Including 15% Gold Bullion – Here’s Why

We are reading a lot of hype these days about gold and the necessity to own it but only about 2% of ‘investors’ actually have gold in their portfolios and those that have done so have insufficient quantities to offset the future impact of inflation and to maximize their portfolio returns. New research, however, has determined a specific percentage to accomplish such objectives. Words: 1063

13. Your Savings and Investments Will Be in Dire Jeopardy Going Into 2012 Unless…..

The United States is now so far in debt, it will never be able to pay it off, that is, without hyper-inflation. That subject alone will require many more articles than this. The sky is not falling (yet) but your savings and investments are in dire jeopardy going into 2012. You might wish to now do something to protect yourself. [May I offer the following investment ideas.] Words: 1648

Share
Previous Busy? Here's a Shortcut to Accessing THE BEST Financial Articles Every Day
Next Events Accelerating Towards an Ultimate Dollar Catastrophe! Here's Why

10 Charts On Why Outlook For Gold & Gold Miners Looking Up