Relative to gold, gold stocks are now +30% cheaper than they were at the bottom of [the previous] 20 year long bear market [and that, in addition to the current negative sentiment for the PM sector, suggests that now might be an ideal time to get your fair share of PM stocks and/or their associated warrants (1 & 2). Let’s take a look at some charts that support my point of view]. Words: 908

(It’s all about Money!), has further edited ([  ]), abridged (…) and reformatted below  for the sake of clarity and brevity to ensure a fast and easy read. Please note that this paragraph must be included in any article re-posting to avoid copyright infringement. Tenebrarum goes on to say:

[As the charts below will show] the public has become extremely bearish on gold equities. To some extent this bearish sentiment is a function of prices, but should prices begin to turn up again, it suggests that there will be a large pool of currently sidelined buyers that could drive prices higher. This does not tell us anything about the near-term performance of the sector, but we would note that the profit margins of gold miners are recently rising strongly and the fundamental backdrop – negative real interest rates and a slowing economy – is very conducive to further profit margin improvements. [For an additional article that supports the argument that now is the time to get back into PM stocks go here (3).]

The gap between the price of gold and the value of the gold shares of the HUI has widened even further [as can be seen in the chart below]. [The HUI is] back below its 200-day moving average, after having briefly touched the 50% fibonacci retracement level of the preceding decline… 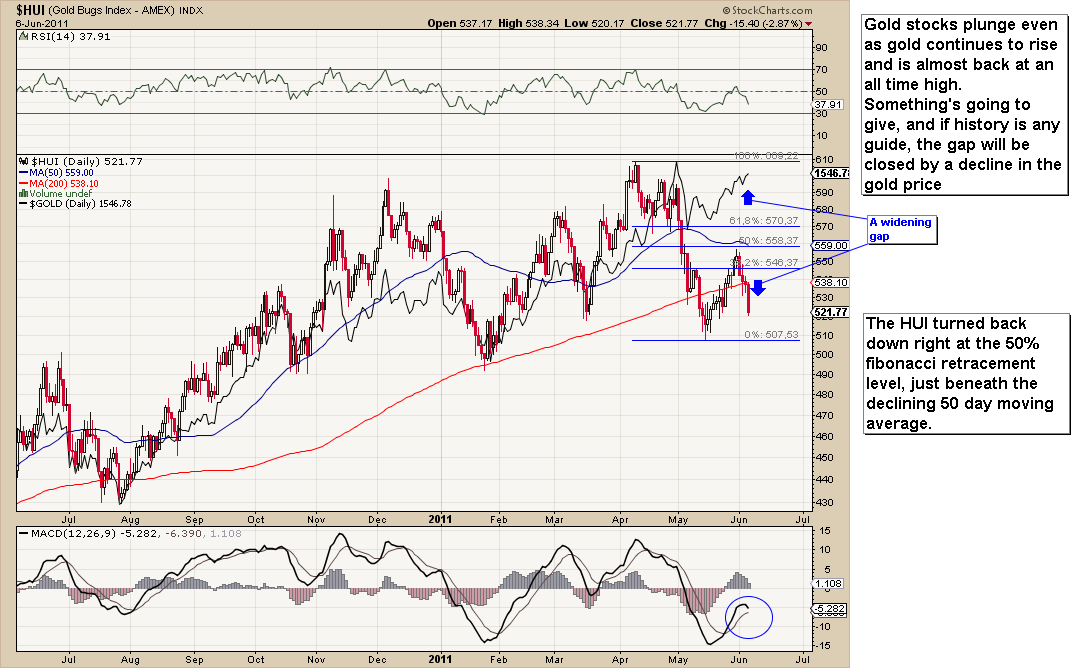 The chart below is a recent example of how valuation gaps between metals and metals producer stocks are usually closed: first silver stocks began to underperform the metal during April and shortly thereafter, in early May, the silver price crashed. 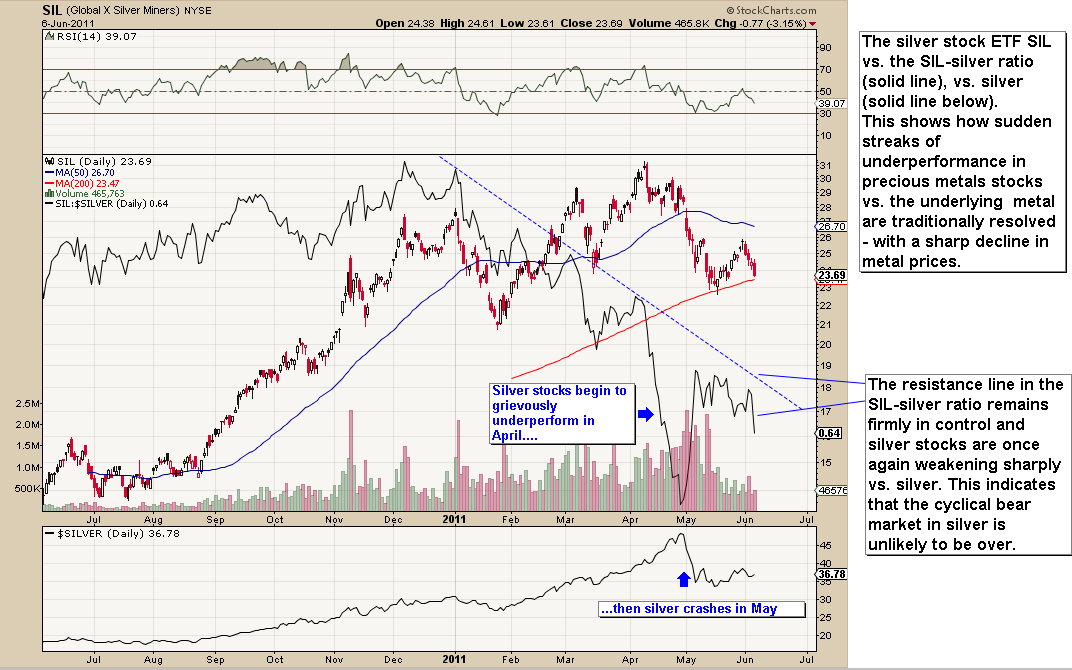 In the course of these recent developments, the HUI:gold ratio has broken below a line of weekly support... There is another support line just beneath the one that has been broken, defined by the 2009 low in the ratio. 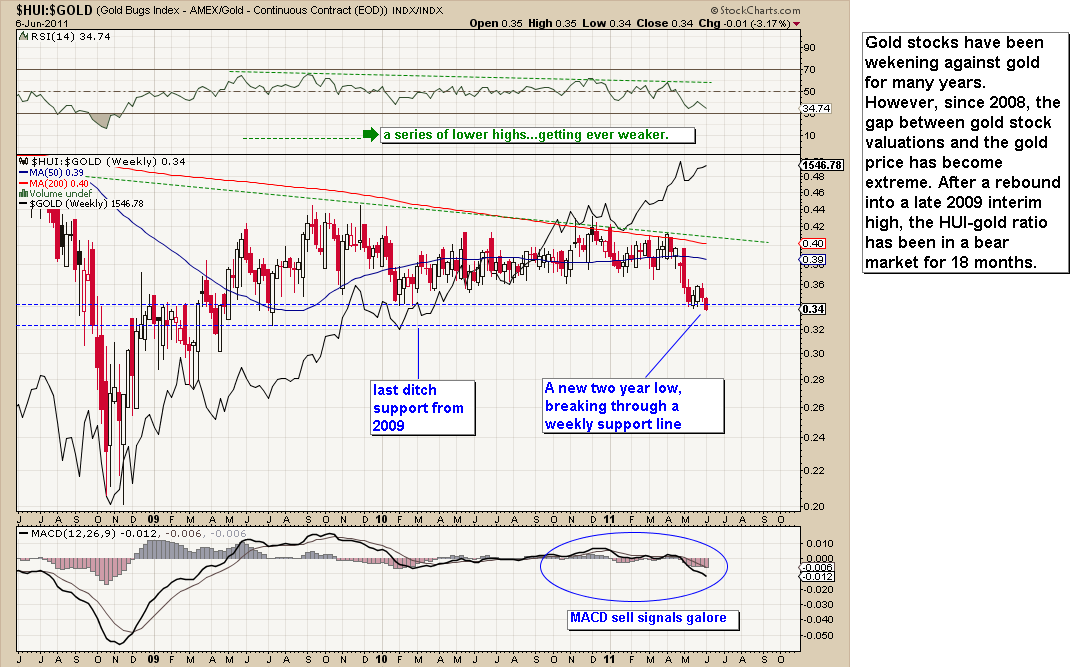 Gold stocks have been weakening vs. gold for many years, but recently their relative strength has broken slightly below an important support level. As one indication of how extreme the weakness of gold stocks vs. gold has become, consider the XAU:gold ratio chart below: 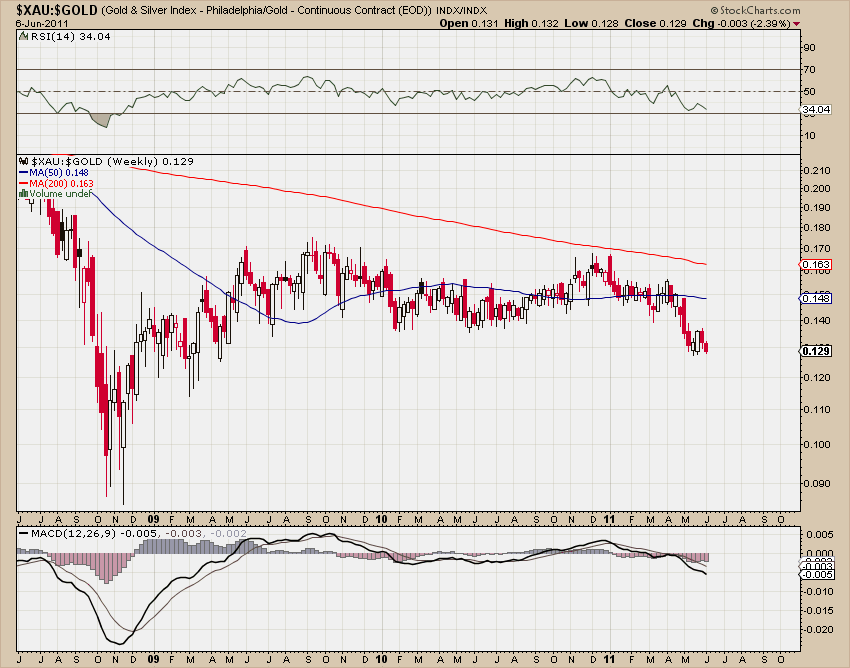 At a mere 12.9, the XAU:gold ratio is breaking to a two year low, and trades a full 4.6 points below the low it reached at the depth of the gold bear market in the year 2000. In other words, relative to gold, gold stocks are now about one third cheaper than they were at the bottom of a 20 year long bear market!

Normally we would…term these recent developments as…short to intermediate term bearish for gold. Should a new liquidity crisis engulf the markets – which is well within the realm of the possible given the simmering crisis in euro land and the global economic slowdown that has been under way for most of this year – then this may well turn out to be the case.

Gold’s chart [see below] continues to look quite constructive:

There is one reason…[to] refrain from getting too bearish and that is the sentiment backdrop accompanying this recent activity. Closed-end funds holding gold and silver bullion continue to trade at either tiny premiums to NAV (net asset value) or even discounts to their NAV – a historically very rare condition as can be seen [in the chart] below. 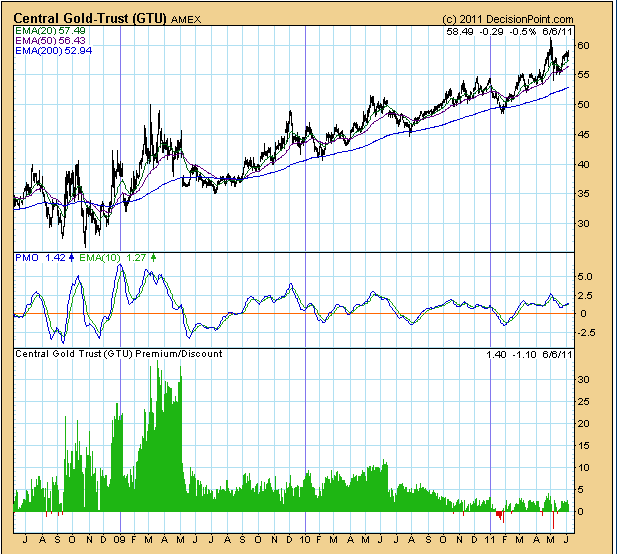 The premium to NAV of the Central Gold Trust has shrunk to a tiny 1.4% [see graph below] which is one of the lowest premiums ever. This year even discounts to NAV could be observed on several occasions.

The Central Fund of Canada [see chart below] trades at a very rare discount to its NAV. 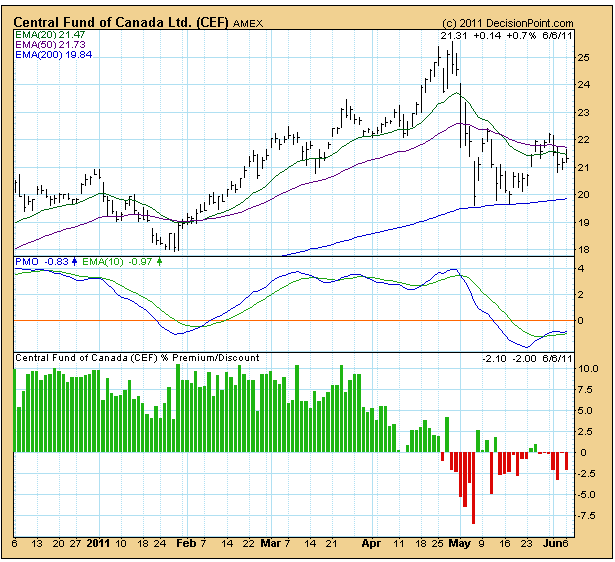 The cumulative cash flow ratio of the Rydex precious metals fund has collapsed to a multi-year low. This is actually quite a contrast to the fund’s performance which, in spite of the recent pullback, is not too bad. 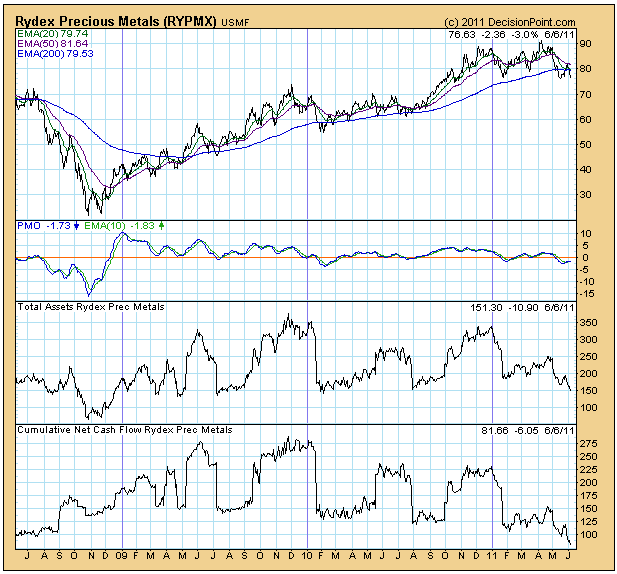 The ‘public opinion’ charts on gold and silver published by sentimentrader.com suggest that there is currently little speculative froth in the metals themselves – in spite of gold’s quite credible performance.  Public opinion on silver (an amalgamation of various quantitative sentiment indicators) is currently well into ‘oversold’ territory. 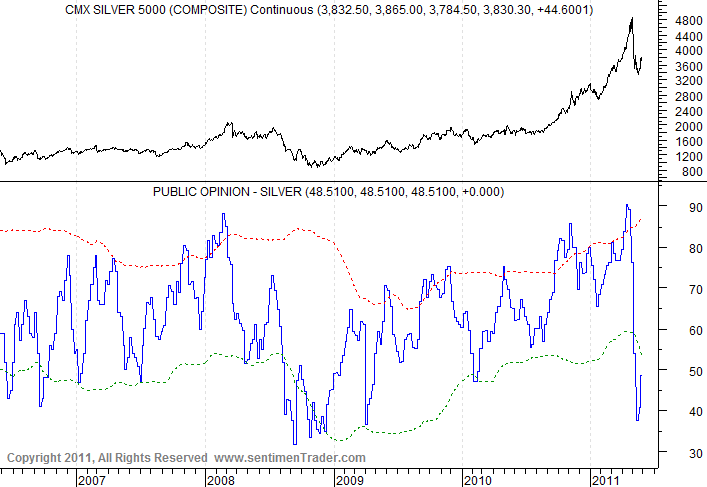 Public opinion on gold is obviously more bullish, but far from an extreme. 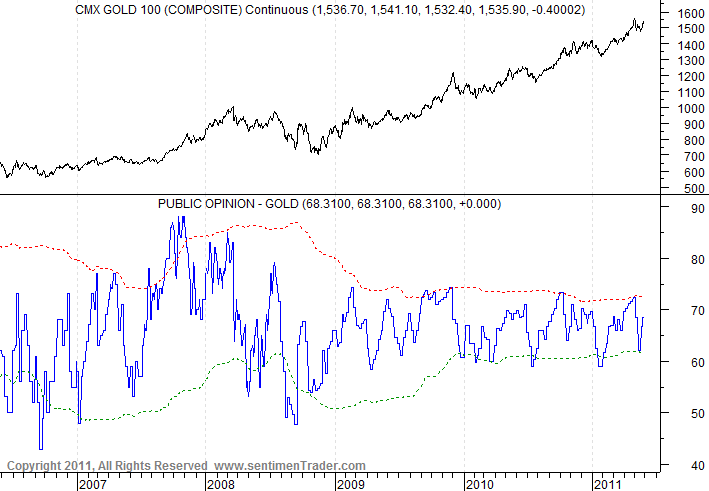 Precious metals related sentiment indicators would suggest that once a change in trend occurs, a new uptrend could be sustained for quite a while as the extremely negative sentiment unwinds.

Links and Titles of Articles Referenced Above:

Share
Previous Slip Sliding Away: Signs Point to Ongoing Economic Decline in U.S.
Next Are You Properly Positioned for the Global Slowdown Ahead? (Almost 2K Views)