Are You Properly Positioned for the Global Slowdown Ahead? (Almost 2K Views)

Lorimer Wilson June 5, 2011 Comments Off on Are You Properly Positioned for the Global Slowdown Ahead? (Almost 2K Views) 2,607 Views

Global Slowdown Ahead, Recession Not Likely

Knowing where we are within the business cycle can help investors better position themselves for superior returns [because, as we all know,] during economic expansions equities typically outperform fixed income investments while the converse is typically the case during economic downturns.  Current analysis of the business cycle suggests a period of slower growth ahead, not just in the U.S., but also globally, [but no signs of an impending recession. Let me explain.] Words: 834

So says an article* by www.financialsense.com which Lorimer Wilson, editor of

www.munKNEE.com , has further edited ([  ]), abridged (…) and reformatted below  for the sake of clarity and brevity to ensure a fast and easy read. Please note that this paragraph must be included in any article re-posting to avoid copyright infringement. The article goes on to say:

Additionally, equity returns among various sectors such as early cyclicals (financials, consumer discretionary), late-stage cyclicals (energy, basic materials), and non-cyclicals (consumer staples, health care) fluctuate depending on where we are, which is often referred to as sector rotation.

Lakshman Achuthan of the Economic Cycle Research Institute (ECRI) is calling for a slowdown in global economic growth by this summer…[based on] the ECRI’s Leading Indicator of Industrial Growth (top line of figure below) which provides a long lead time to global industrial production and commodity inflation. It peaked late in 2010 and is forecasting a slowdown in industrial growth by this summer and weakness persisting through much of the rest of the year. 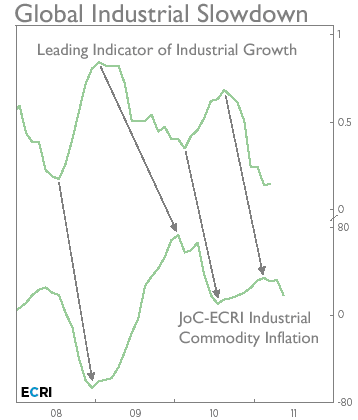 The good news as the slowdown quickly approaches is that Achuthan does not believe another recession is headed our way. The bad news is he says “the U.S. economy will not escape” the downturn, but will “participate in it … and in one way, shape or form, it is going to impact this recovery.”

My own analysis lines up with Achuthan as my OECD CLI Diffusion Index (orange line below) has peaked and has been turning down now for several months, as fewer and fewer OECD nations are experiencing accelerating growth. While many global economies are already beginning to decelerate, more than 90% of OECD countries are experiencing positive economic growth as can be seen by the blue line below, which shows the percentage of OECD nations with expanding economies. We had growth slowdowns in late 2004 and again in 2010 that did not lead to a global recession…although more than 50% of OECD economies expanded than contracted[during that time period]. 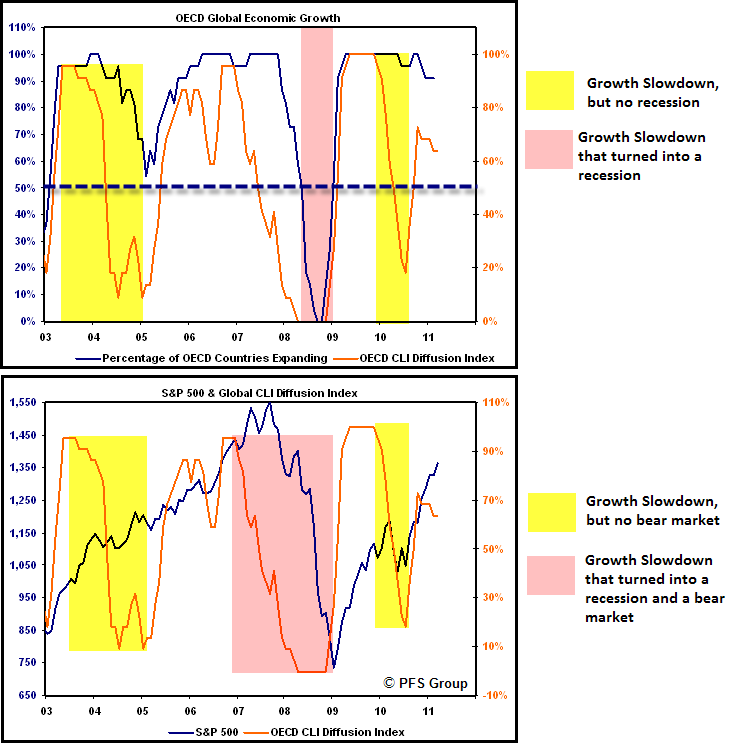 Both [the 2004 and 2010] global slowdowns witnessed flat-to-negative one-year returns in the S&P 500 but no bear market…as was the case in 2008 when the global slowdown turned into an outright recession going from 86% of OECD countries experiencing expanding growth heading into 2008 [down] to 0% by the fall…producing the first bear market in the U.S. since 2000 [and,] according to the ECRI, there is clear evidence that the global economy, including the U.S., will experience a growth relapse ahead.

No Evidence of a Recession

While the case for a growth slowdown ahead is easily made [as per the above indicators], there is not enough evidence to make a recession call. Our recession model [see chart below] typically provides several months’ warning before a recession begins [with] the 20% mark…[being] the line in the sand with only one false signal (1987) over the last 30 years. Given [that] the current reading rests at a 3% probability of a recession beginning over the next six months, I am in agreement with the ECRI’s Achuthan that a recession is not in the cards as of yet. 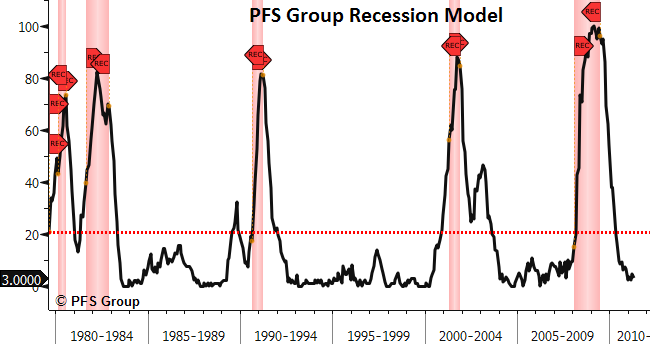 In a nutshell, [a defensive position] is likely to outperform over the next six months, which would mean that in terms of asset classes, bonds will likely outperform stocks. In terms of sectors, the non-cyclical sectors such as healthcare and consumer staples will benefit from sector rotation as investors decrease their allocation to cyclical sectors like consumer discretionary and financials and lower their portfolio’s risk profile.

Monitoring incoming data will be the key to gauging whether economic growth will reaccelerate like it did at the end of last summer, or if the coming growth slowdown will morph into another recession.