In this article we review the characteristics and different stages of a bubble, present some recent asset price bubbles, and identify current conditions which match up with traditional bubble criteria. @A Financial Site For Sore Eyes & Inquisitive Minds

Some of the characteristics of past bubbles that should aid in identifying current potential asset bubbles include: @Economic Developments

Let’s look at how the above bubble characteristics and stages were manifest in recent prior bubbles.

Japan’s bubble was characterized by rapid acceleration of real estate prices (and subsequently stock prices) and an overheated economy. All of this was fueled by a Bank of Japan monetary policy error, lowering interest rates and allowing uncontrolled money supply and credit expansion. The euphoria phase was characterized by Japanese citizens, traditionally great deposit savers, shifting money from savings accounts into the capital market.

On our chart of the Nikkei 225 stock index, several items are worth noting: 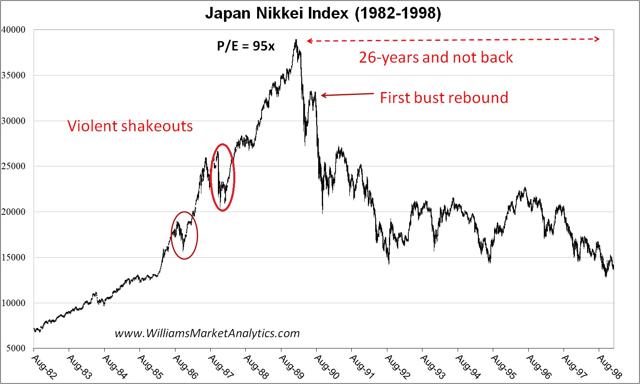 We see most of the bubble characteristics cited above with the tech stocks during this period.

Our chart of the Nasdaq-100 (NASDAQ:QQQ) again shows: 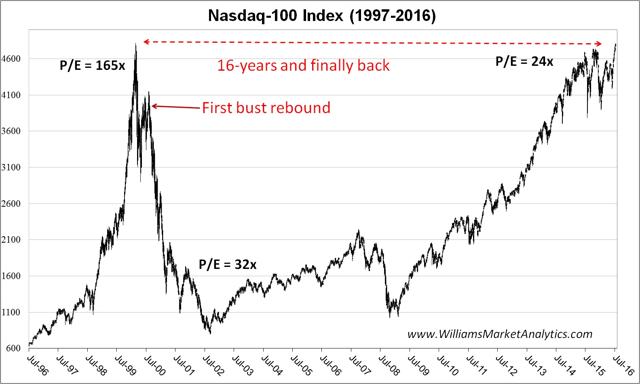 Chinese stock prices ran up from 2006 to 2007 on speculative trading with borrowed money (the leverage quality of bubbles).

In the chart of the CSI 300 index (NYSEARCA:ASHR) below, the same themes reappear: 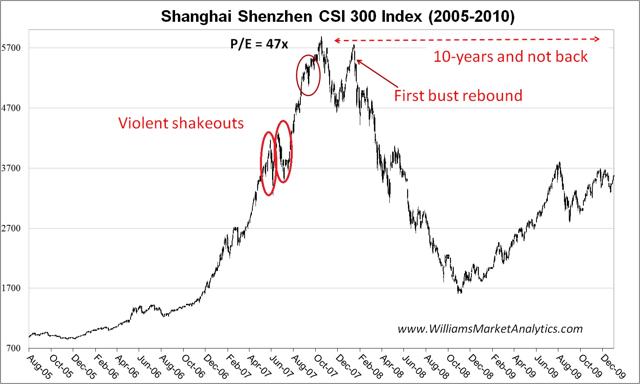 Remember “Peak Oil”? This was the cause, or the displacement, which began the oil price bubble starting in the summer of 2008. Investors got out of the stock market in 2007 and started investing in oil believing that demand from China would outstrip supply. Oil prices (NYSEARCA:USO) set a record of $143.68 a barrel in July 2008 before collapsing to $33 a barrel six months later.

[The] same [bubble] patterns [are seen] in the chart below: 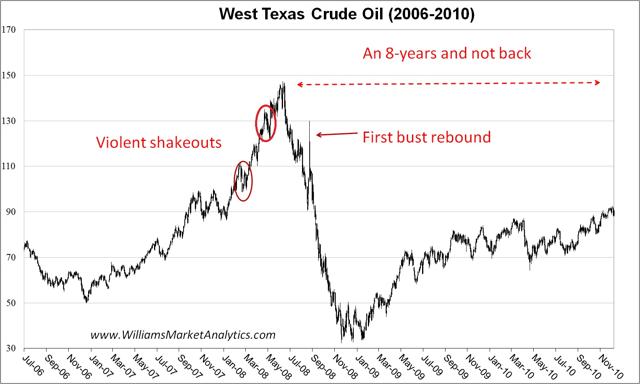 Mortgage-backed securities insured by credit default swaps allowed banks and mortgage brokers to offer home loans to just about anyone. That drove up demand for housing, which homebuilders tried to meet. Many people bought homes, not to live in them or even rent them, but just as investments to sell as prices kept rising. Home prices never fall, we believed, creating the displacement which led to the housing bubble.

Looking at the Dow Jones Homebuilder’s index (NYSEARCA:ITB), we once again see the same bubble characteristics: 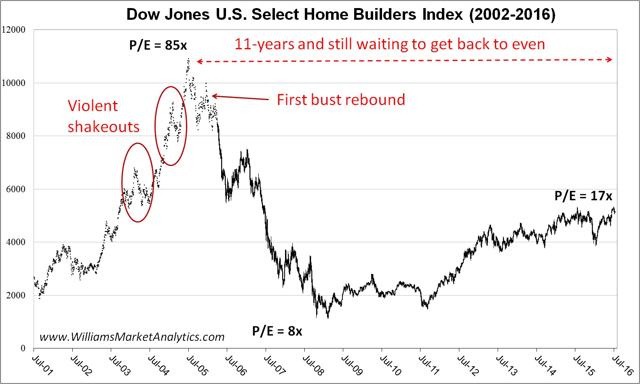 Going hand-in-hand with the “Peak Energy” speculation, investors fell in love with solar, wind, and other forms of clean energy (the displacement). Never mind that these companies never earned money and survived only through heavy government subsidies.

As with the prior bubbles: 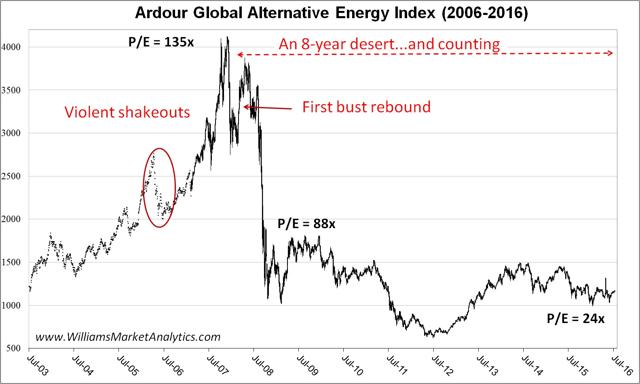 To begin looking for asset bubbles today, we must begin with those assets most impacted by central bank stimulus. They include rate products in developed countries and U.S. stock prices in particular. Reviewing the general characteristics of past bubbles, we can make a strong argument that several asset classes are already between the Boom and Euphoria phases of the bubble.

[Below are] a couple…[of] examples of assets we believe to be close to the Euphoria stage of a bubble:

The top chart below shows the S&P 500 Consumer Staples index (NYSEARCA:XLP) and the bottom chart the Treasury Bond ETF (NYSEARCA:TLT). 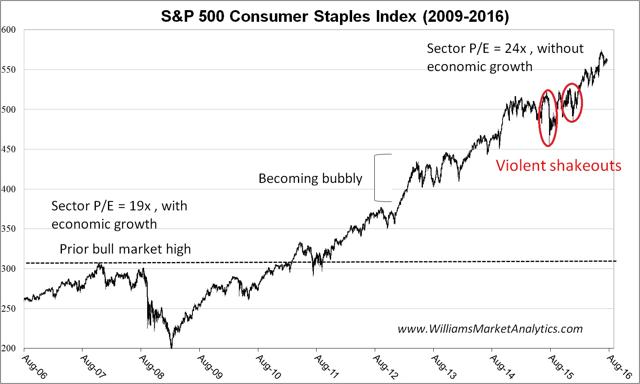 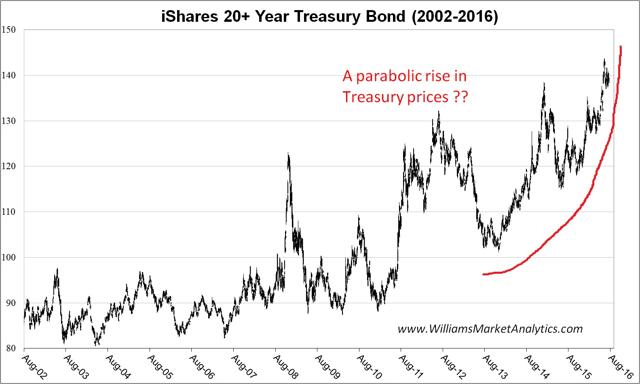 In all cases, the hallmark of an asset bubble is irrational exuberance:

There is no road map for how long or how high the Boom and Euphoria phases may last. It is laughable to read market pundits predict upside potential, both in terms of percentage gains and duration. Similarly, those warning of the impending bust of the Everything Bubble will be correct, but all traders know that being too early is indifferent from being wrong. Indeed, it is probably the most difficult time in recent history to invest, given the breadth of the Central Bank / Everything Asset Bubble — there are few places to hide.

Where are we now?

How much longer and higher stocks and bonds may run in the Everything Bubble, no one can predict, but for those who stay invested in inflated assets, be aware that you are implicitly increasing your risk tolerance well beyond levels which typical risk-averse investors would be comfortable with.

This synopsis of edited excerpts from the original article  provides you with a FASTER – and EASIER – read. The author’s views and conclusions are unaltered and no personal comments have been included to maintain the integrity of the original article. Furthermore, the views, conclusions and any recommendations offered in this article are not to be construed as an endorsement of such by the editor. Please note: This complete paragraph, and a link back to the original article, must be included in any article re-posting to avoid copyright infringement.