Sure, the market is getting more and more expensive, debt levels are still high

around the globe, and the Drudge Report assures us daily that the world is going to hell in a handbasket, but does this signal the end is near for stocks and the economy? This article presents 4 “big picture” charts or indicators to help determine whether the markets and economy are topping out and ready to roll over. Let’s take a look.

The above introductory comments are edited excerpts from an article* by Cris Sheridan (FinancialSense.com) entitled Still No Sign Of A Bear Market – Here’s Why.

Sheridan goes on to say in further edited excerpts:

Although certain events can always take the markets by surprise and lead to a correction, in general, most major turning points and trend changes between bull and bear markets are associated with a meaningful and prolonged decline in:

Right now, as the charts below clearly show, we see none of these things currently taking place.

The Conference Board’s Leading Economic Index (in red), which we’ve shown numerous times before, measures a wide range of economic data across the U.S. and shows the main trend is still positive (S&P 500 in black). Until this and other LEIs begin to weaken and reverse trend, the overall economic backdrop is favorable. 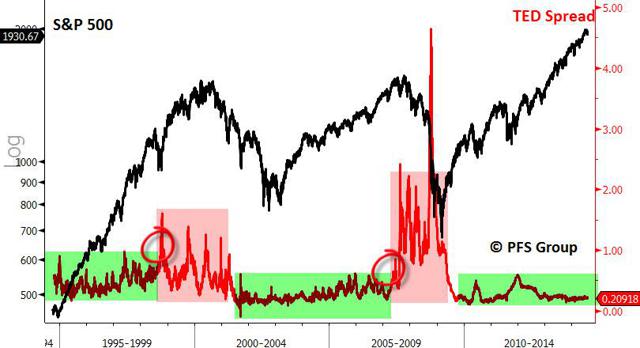 The stock of a company rises and falls each quarter based on their earnings. The stock market is, of course, a market of stocks and so what happens when the majority of companies report better earnings? The stock market rises. However, as Investopedia says, “the earnings of a company often doesn’t tell the entire story.” For that, you have to look at profit margins, which take into account costs as well.

Here we provide a chart of the collective profit margins of S&P 500 companies. As you can see, profit margins peak along with the stock market and often signal the beginning of a bear market, something which hasn’t happened yet. 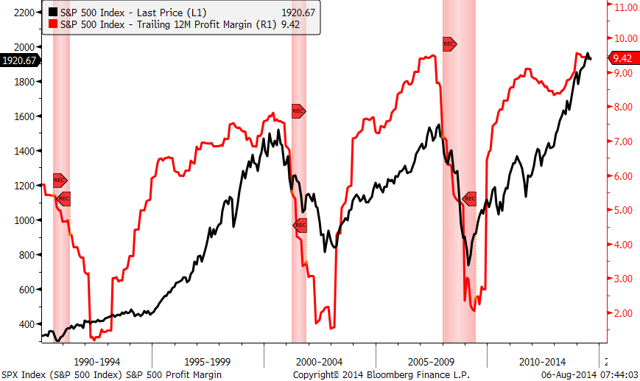 4. Probability of a Recession

Corroborating the message from the chart above is our own Recession Model, which shows the current probability of a U.S. recession at only 3% (Note: this model is optimized to spike once certain threshold levels are met to help delineate between a minor economic slowdown and the beginning of recession). 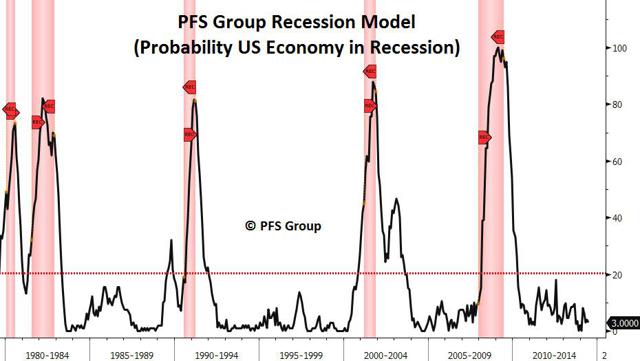 When we look at the direction of U.S. economic data, the probability of a recession, levels of financial stress, and corporate profit margins the message is clear: we are not yet seeing any of the tell-tale signs associated with a major peak or beginning of a bear market in U.S. stocks.

The financial markets are drastically over-capitalizing earnings and over-valuing all asset classes so, as the Fed and its central bank confederates around the world increasingly run out of excuses for extending the radical monetary experiments of the present era, even the gamblers will come to recognize who is really the Wile E Coyote in the piece. Then they will panic. END_OF_DOCUMENT_TOKEN_TO_BE_REPLACED

2. NO Amount of Money Printing Can Cleanse the Rot of the U.S. Economy

The U.S. economy is on life support, graciously provided by Central Planners but no amount of money printing can cleanse the rot of the U.S. economy. In this Markets at a Glance, we investigate the U.S. consumer and show that for a large portion of the population, things are not anywhere close to being better, in fact they are worse than before the recession. END_OF_DOCUMENT_TOKEN_TO_BE_REPLACED

3. How Much Time Before “The 7 Bubbles of America” Start to Burst?

History has shown us that all financial bubbles eventually burst. It is not a question of “if” they will burst. It is only a question of “when” and when the 7 current financial bubbles in America burst, the pain is going to be absolutely enormous. That being said, how much time do you believe that we have before these bubbles start to burst? END_OF_DOCUMENT_TOKEN_TO_BE_REPLACED

4. No Recession Until These 6 Indicators Are Triggered

Despite a long list of major risks to the global economy, the trend for the stock market is still UP until proven otherwise. At this stage it is absolutely critical to be cautious and watch for signs of a market correction or peak, but it is our view that a recession won’t take hold until the following 6 key indicators are triggered. END_OF_DOCUMENT_TOKEN_TO_BE_REPLACED

Share
Previous This Stock Market Decline: The “Real Deal” Or Just Another “Head-fake” Bear Trap?
Next Goldbugs Should Pray for Higher Interest Rates – Here’s Why

The State of Household Debt in America

What Will Happen If (and probably when) the U.S. Debt Bubble Bursts? (+17K Views)