What the Bond Market Is Really Telling Us About Inflation

The Federal Reserve’s dual quantitative easing exercises…have been disappointing thus far and, according to what the multi-billion dollar Treasury market is telling us, the numerous forecasts of upcoming inflationary pressures just do NOT exist. [Let me explain.] Words: 571

So says Carlos X. Alexandre (http://cxamarkets.com/) in an article* which Lorimer Wilson, editor of www.munKNEE.com , has further edited ([  ]), abridged (…) and reformatted below  for the sake of clarity and brevity to ensure a fast and easy read. Please note that this paragraph must be included in any article re-posting to avoid copyright infringement. Alexandre goes on to say:

Because a picture is worth a thousand opinions take a look at the chart below which depicts the trajectory of ten year Treasury yields [during] the timeline of quantitative easing. 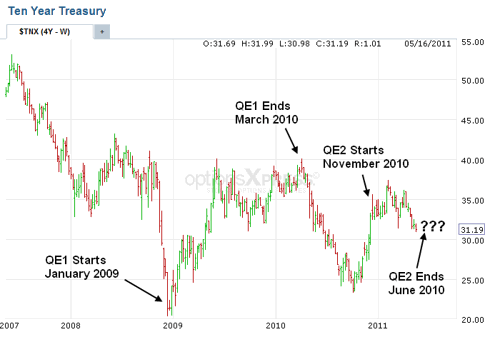 [To repeat:] The multi-billion dollar Treasury market is stating that inflation does not exist… after responding to the initial perception that inflation was [just] a matter of time – and we’re talking private capital and independent thinkers, not the so-called “manipulation” by government statisticians.

The Bond Market’s Response to QE1

As QE1 got under way, the bond market sold off, pricing an expectation of higher inflation ahead. About midway through the process, the lack of inflation, among other factors, became apparent to market participants, and ten year yields stayed roughly between 3.5% and 4.0% until QE1 ended in March of 2010. Investors looked around and couldn’t pinpoint what the quantitative easing program had actually done [resulting in] yields dropping… from 4.0% to 2.5%.

The Bond Market’s Response to QE2

[When] the Federal Reserve announced another round of easy money… the rates popped [up] to around 3.75% and then took a deep breath. Once again, the market could not smell the familiar inflationary stink and yields dropped to today’s 3.15%.

The quantitative easing sequel is about to end its run and, as the broad market sees it, [there has been] no damage and no solution either…In addition, the flow of recent economic data highlights a return to dismal growth, with a few encouraging signs along the way. [As such,] an understanding of why QE has not delivered the goods and why deflationary pressures persist is required. As I have stated before, the reason behind the money printing exercise’s failure to accomplish its goals is quite simple – the consumer is not responding.

The Stock Market’s Response to QE

From an equity market perspective the generally accepted belief that financials outperform when rates are low is not materializing, and that goes to the unusual nature of the investment environment and the lack of reference points. Banks — not brokers or investment houses — are the “canary in the coal mine.” [As such,] my stance has been, and continues to be, bearish on the U.S. economy and bullish on the equity markets – strictly based on capital flows.

It appears we are coming to a crossroads where market perceptions of the future are meeting a screaming economic reality, and vigilance on market sentiment, or capital flows [which] I prefer [to follow], will determine the turning point…