Immigration: Does It Drag Down the Economy? Lower Wages? Take Jobs from the Native-born?

Lorimer Wilson January 27, 2019 Comments Off on Immigration: Does It Drag Down the Economy? Lower Wages? Take Jobs from the Native-born? 1,895 Views

“…There has been…[a great deal of] research done recently on the cost of illegal immigrants to the economy and to society…[and the results are surprising and encouraging.]”

Prepared by Lorimer Wilson, editor of munKNEE.com – Your KEY To Making Money! [Editor’s Note: This version* of the original article by Kevin Wilson has been edited ([ ]), restructured and abridged (…) by 66% for a FASTER – and easier – read. Also note that the original author is receiving compensation from Seeking Alpha for pageviews of his original unedited article as posted there so please refer to it for more detail.]

“At issue are a whole range of questions, including at least the following:

…Leaders from both the Democrat and Republican parties have long endorsed:

…We find ourselves in a situation [today, however,] in which:

For investors, there are several issues worth paying attention to in the immigration debate:

Empirical Data on the Economics of Immigration

One of the politically strongest arguments against immigration has historically been the notion (and widespread belief) that:

Census Bureau and “BLS” data indicate, however, that years with higher immigration do not coincide with those years characterized by higher unemployment (Chart 12). In fact: 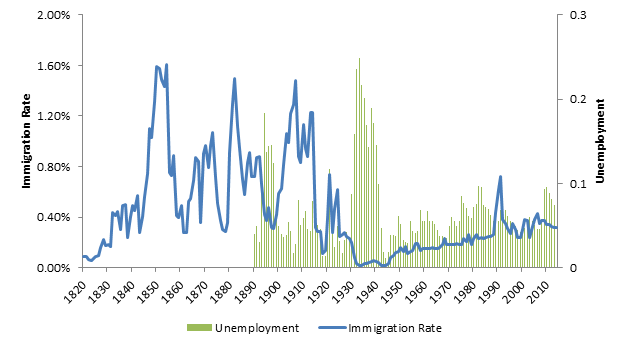 Zooming in on the 1990-2004 period (Chart 13), there still seems to be a mildly inverse correlation between unemployment and immigration rates. 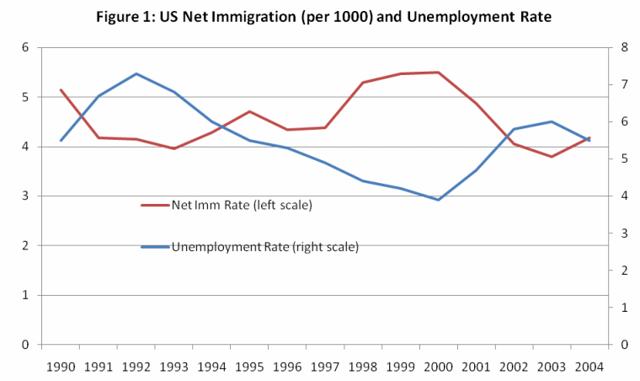 …If we look at apprehensions of illegal immigrants versus unemployment from 2000 to 2012 (Chart 14), we observe at least some confirmation of an inverse correlation between unemployment and immigration. 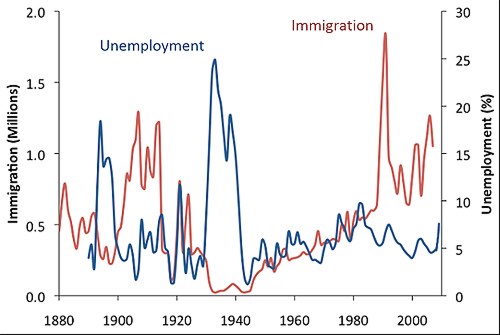 Another issue in the analysis of unemployment (and all other economic data related to immigration) is the fact that the distribution of immigrants across the country is quite patchy, with some states receiving huge influxes and others almost none (Chart 16)… 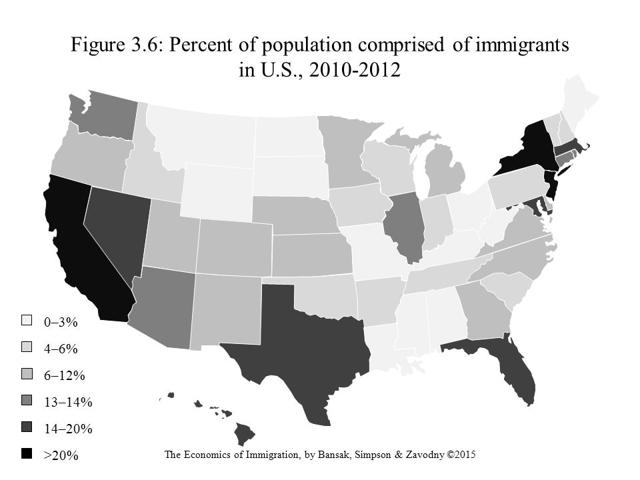 Texas, [for example,] is a big border state with big illegal immigration problems, as well as having plenty of legal immigration due to its strong economy and large, well-funded universities. For the period from 2007 to 2011 (recession and early recovery), immigrants comprised 29% of population growth in Texas but took an 81% share of job growth (Chart 17). This may simply reflect the temporary economic situation associated with the Great Recession, or it may be of more general application; it’s hard to say based on the limited data available. 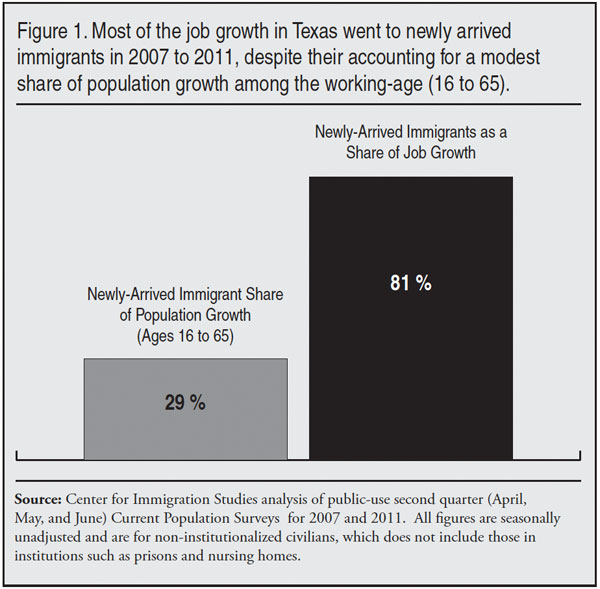 …Some have claimed that there may be times and places where immigrants do, in fact, take jobs away from certain types of American workers: 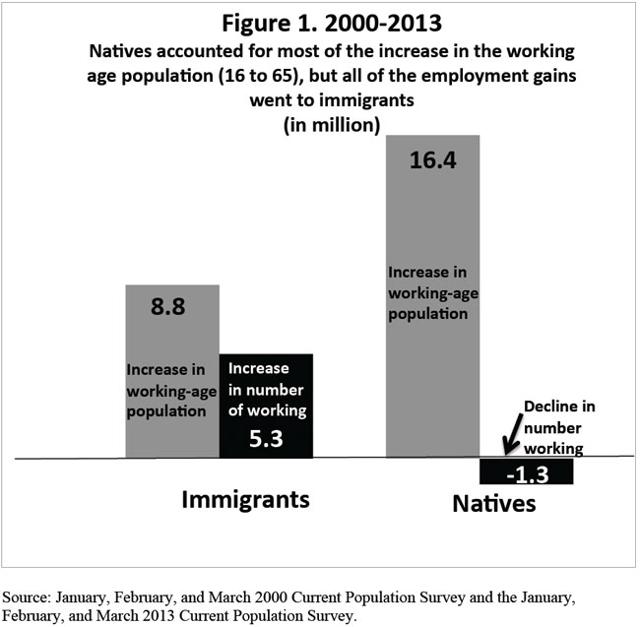 Chart 19: Immigrants Have Gained Share in the Labor Force Since 1970 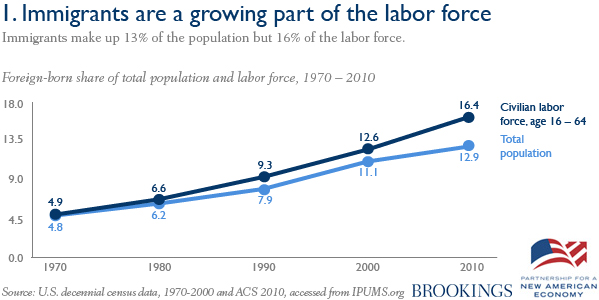 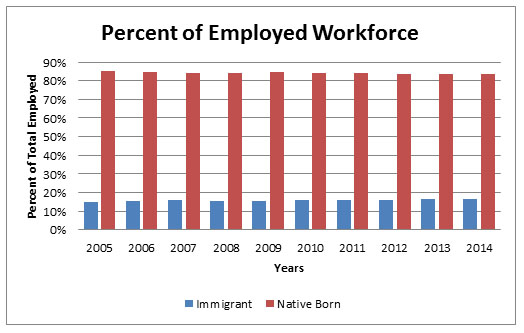 Note the subtle difference between the data sets in Charts 19 and 20.

…More foreign labor is available then, but it does not appear to be (in these data sets) fully employed. This is almost certainly because the supply of unskilled labor in some locations has exceeded demand, forcing many immigrants onto the welfare rolls initially upon arrival, as discussed below.

…Immigrants are heavily employed in the:

Chart 21: Occupations of Immigrants and Their Children 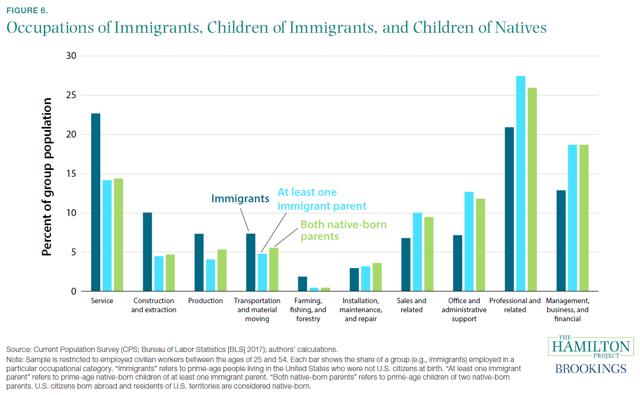 Most illegal immigrants work in the first three sectors so, if jobs in the service, construction, and extraction sectors are more in supply at times than jobs in other sectors, immigrants will tend to preferentially benefit. Indeed, it does seem that service sector jobs are the main ones available in recent years anyway (Chart 22). 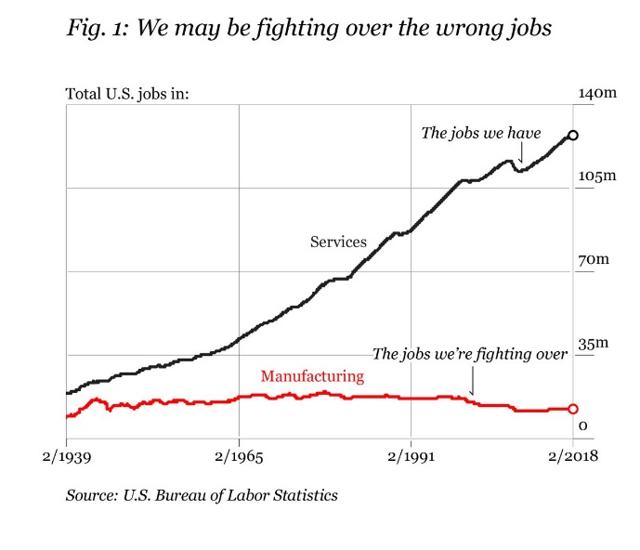 Furthermore, it is widely believed that illegal immigrants have mainly taken jobs Americans don’t want. Certainly, this seems to be confirmed by statistics on hazardous jobs and job-related fatalities (Chart 23).

Chart 23: Foreign-Born Workers Increasingly More Likely To Be Killed on the Job 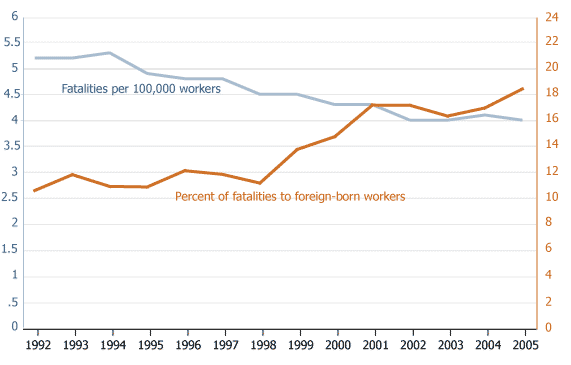 If foreign-born workers are taking jobs that Americans actually want in significant quantities, why do their unemployment rates so closely track those of the native-born (Chart 24)?

Chart 24: Unemployment Rate for Foreign-Born Workers Closely Tracks That for the Native-Born 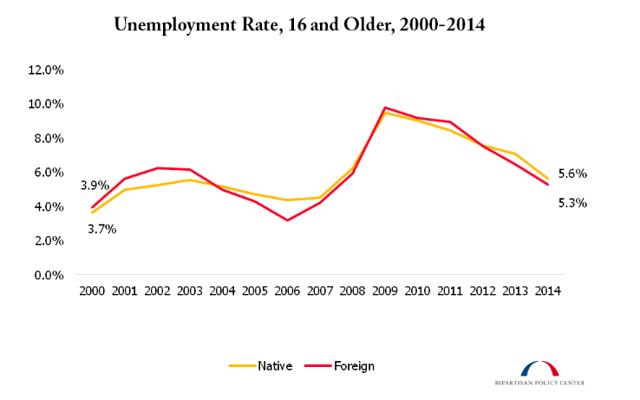 Additional confirmation of the findings on job losses to immigrants (Charts 18 & 19 above) has thus been hard to find. It appears that immigrants take mainly service, construction, and extraction sector jobs that Americans don’t want, or at least don’t prefer.

The skill sets of native-born and illegal immigrant workers do not closely align, and thus they do not appear to be competing for the same jobs in many cases (Chart 25).

Chart 25: Illegal Immigrants Do Not Compete Proportionally for the Same Jobs as Those Sought by Native-Born Workers 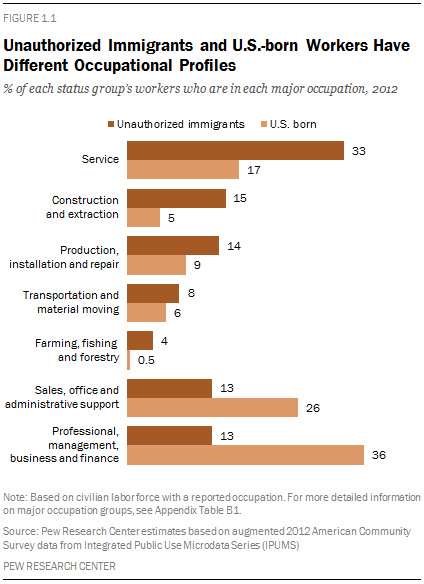 With respect to the widespread claims made that immigrants cause the wages of native-born workers to be depressed, there is at least some supporting evidence…(Chart 28), it amounts to only -1% or even less than that…

Chart 28: Some Studies Suggest Low-Skilled Native-Born Workers Have Lost Only About 1% in Wages Due to Immigration Impacts 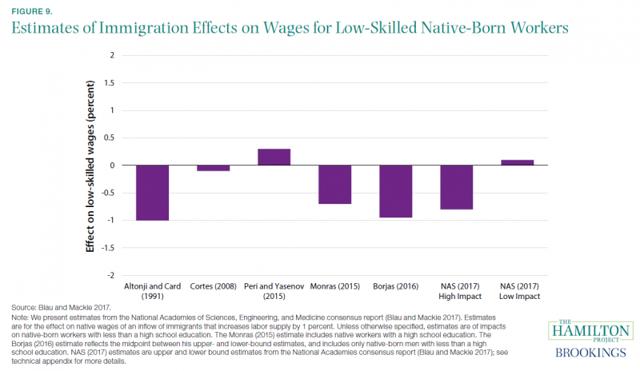 Almost all of that negative wage differential falls on those without a high school diploma (Chart 29), who actually appear as a cohort to lose almost 5% in wages.

Chart 29: Native-Born Workers with No High School Diploma Are the Hardest Hit by Immigration 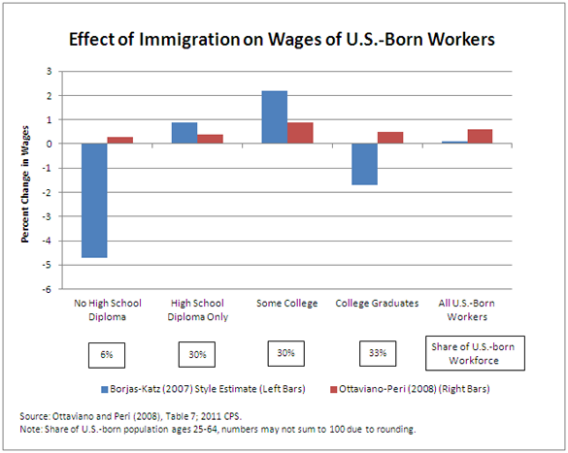 Indeed, one well-known researcher has concluded that the lost wage effect is far bigger than the -1% loss most studies have reported (e.g., George J. Borjas, 2016; Op. cit.)…

The issue of immigrants putting a strain on the welfare and healthcare systems is a serious one. National studies by academics have long maintained that foreign-born residents have little long-term (lifetime) cost (i.e., negative fiscal impact) to native taxpayers (Chart 30) unless these immigrants lack a high school education. 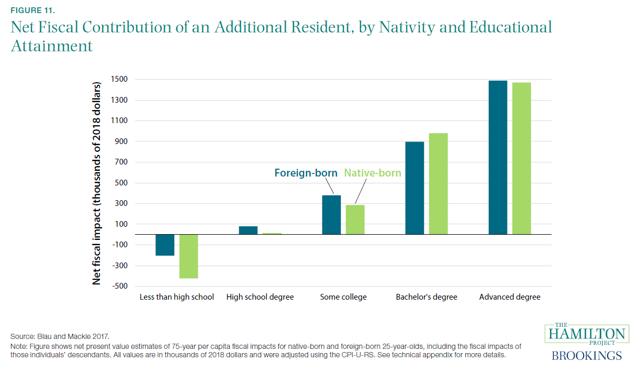 However, the well-respected economist George Borjas has presented recent data indicating that new immigrants and naturalized citizens use far more social services as a percentage (Chart 31) than the native-born do. This is probably mainly due to the relative poverty and lack of education of many illegal immigrants when they first arrive.

Chart 31: New Immigrants and Naturalized Citizens Use Social Services at Higher Rates Than Natives Do 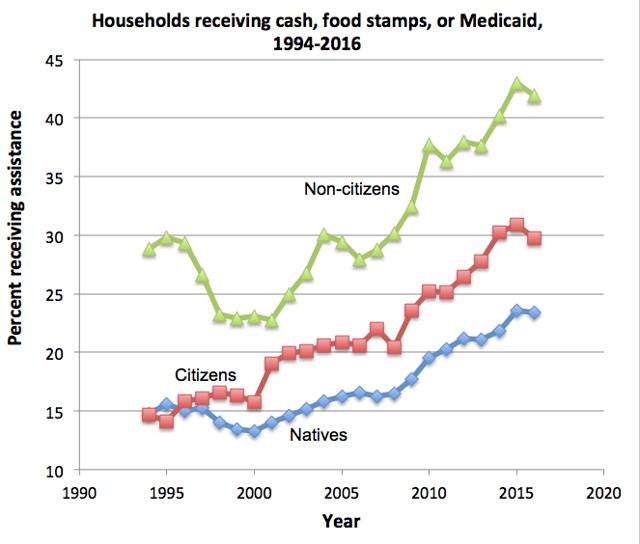 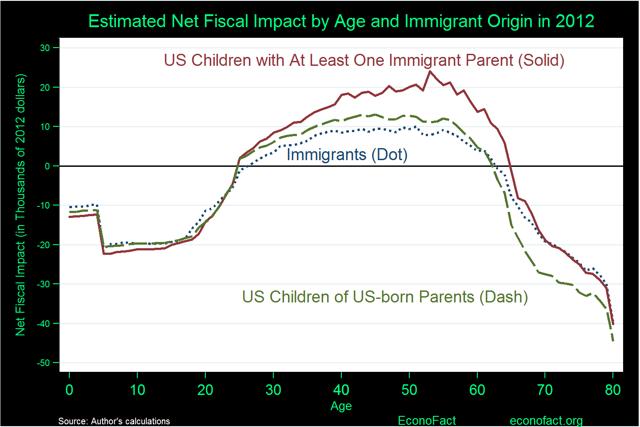 Borjas estimates that the annual fiscal cost of immigration due to the federal and state services immigrants use and the lower taxes they pay (based on lower income) amounts to about $50 billion per year; note however that this is offset by the long term (lifetime or generational) fiscal surplus of $50 billion which immigrants produce to the benefit of natives due to their effect on the wealth of employers (George J. Borjas, 2016; Op. cit.)…

In conclusion it is fair to say that:

Since there are already indications of an incipient global recession and a pending US slowdown, it would seem prudent to adopt a very defensive portfolio posture if one is an investor, as opposed to a trader. In the end, I believe that those who own long-term Treasuries and gold will make a lot of money in the next 12-36 months, and those holding stocks will writhe in pain at their enormous paper losses. Allowing for human nature, most people will sell closer to the bottom than the top…”

Share
Previous Great Profit Expansion Has Ended – Stocks Are Doomed As A Result!
Next 7 Ways the Average American Is Worse Off Today