Gold bugs: look out below! There are undoubtedly a lot of speculative purchases that

may need to be unwound in coming years. I think gold could fall to $1000 or even less as it realigns with other commodity prices.

So writes Scott Grannis (http://scottgrannis.blogspot.ca) in edited excerpts from his original article* entitled The End Of The Second Great Gold Rally.

This post is presented compliments of Lorimer Wilson, editor of www.munKNEE.com (Your Key to Making Money!) and the Intelligence Report newsletter (It’s free – sign up here). You can also “Follow the munKNEE” daily posts on Twitter or Facebook. The article may have been edited ([ ]), abridged (…) and/or reformatted (some sub-titles and bold/italics emphases) for the sake of clarity and brevity to ensure a fast and easy read. Please note that these paragraphs must be included in any article re-posting to avoid copyright infringement.

The…bull market in gold has come to an end…This could be a wild ride.

The first great gold rally occurred in the 1970s, sparked by Nixon’s decision to abandon the dollar’s link to gold. The Fed had been failing to tighten policy since the mid-1960s, despite continual outflows of gold which were symptomatic of declining dollar demand and rising dollar supply – in short, dollars were in excess supply. Set free, gold rose from $35/oz. to a peak of $850 in January 1980, for a spectacular gain of over 2,330%, and the excess of dollars combined with loss of confidence in the dollar fueled a surge of inflation. That incredible gold rally was brought to an end by Fed chairman Paul Volcker, who in 1979 decided to slam on the monetary brakes in order to bring inflation under control. From its peak in early 1980, gold proceeded to fall for the next 21 years. 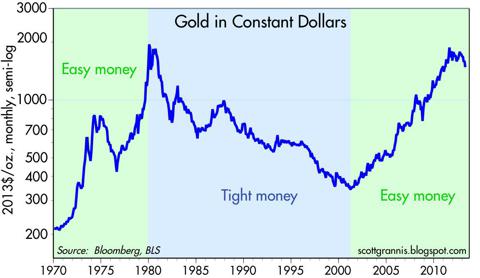 The chart above converts the nominal price of gold, shown in the first chart, into an inflation-adjusted or constant dollar price. This also highlights how significant the big moves in gold were, and how well they corresponded to sea-changes in monetary policy. The big decline in gold from 1980 through 2000 coincided with generally tight monetary policy that brought inflation down from double digits to only 2%.

The second great gold rally began in 2001, around the time the Fed realized that it had been too tight for too long and began reducing the Fed funds rate target from 6.5% to 1.75% over the course of that year. The PCE deflator fell at a -0.4% annual pace in the second half of 2001, which was the first time it had ever visited deflationary levels – proof that the Fed had been too tight. As the Fed embraced easy money, gold rose from a low of $256 in early April 2001 to a high of $1900 in September 2011, for a gain of 642%. In real terms, gold reached almost the same levels it had in early 1980.

The latest gold rally is now over… Many will speculate about its origins and its recent demise, but for me it is fairly straightforward. Gold rose because:

After a brief decline in 2008, when the financial crisis caused a surge in dollar demand that the Fed was slow to respond to, gold resumed its upward climb. Commodities also suffered in 2008, but even more so than gold because a the global recession destroyed demand. Like gold, commodities then resumed their rally from 2009 through early 2011. Commodities peaked in April 2011, and gold peaked shortly thereafter, in August 2011. 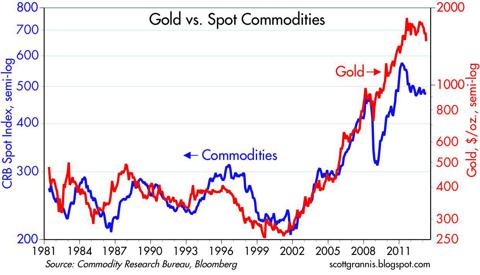 As the chart above suggests, gold overshot commodity prices by a significant amount over the past five years.

The End of the Second Great Gold Rally

One after one, [however,] the fears of hyperinflation, a dollar collapse, or a euro collapse fell by the wayside, and now the Fed is…ending QE3 within a matter of months… 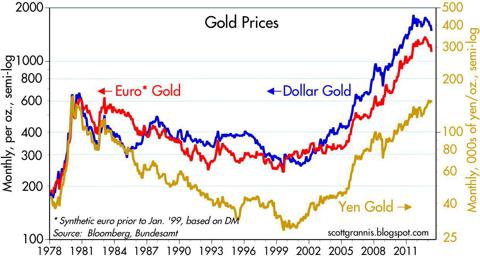 Looking ahead, as a first approximation, I think gold could fall to $1000 or even less as it realigns with other commodity prices (see second chart above)...

2. What Does the Future Hold for Gold? 3 DeterminantsThe best way to think of gold is as a non-yielding currency with a special trait: The only way to “print” it is to pull it out of the earth at great cost. As a currency with no yield and limited practical use…gold’s investment case largely rests on its ability to insure against currency depreciation. Few people expect to make money by taking out insurance policies. I don’t recommend allocating any more than 10% of a portfolio to gold. Words: 610

The price of gold, on a quarterly basis, is 86% correlated – yes, 86%! – to total government debt going back to 1975… and a shocking 98% over the past 15 years! [As such,] it would seem like a no-brainer investment thesis to buy gold… as a proxy for the not-otherwise-investable thesis that US total government debt will increase in the future. [But there is more – and it is disappointment for gold bugs – read on!]

Commodity prices including those of…[gold and silver] tend to go through super-cycles…[which] last for many years. [Below is a review of the history of such cycles and the length of each. Where are we now in each? When will they go “boom”? When will they go “bust”? Let’s take a look.] Words: 165; Charts: 1; Tables: 3

Share
Previous Don’t Look a Gift Horse in the Mouth! Now’s the Time to Buy Gold, Not Sell It
Next You’re Being Played! Don’t Sell Your Gold! It’s Going MUCH Higher – Soon!